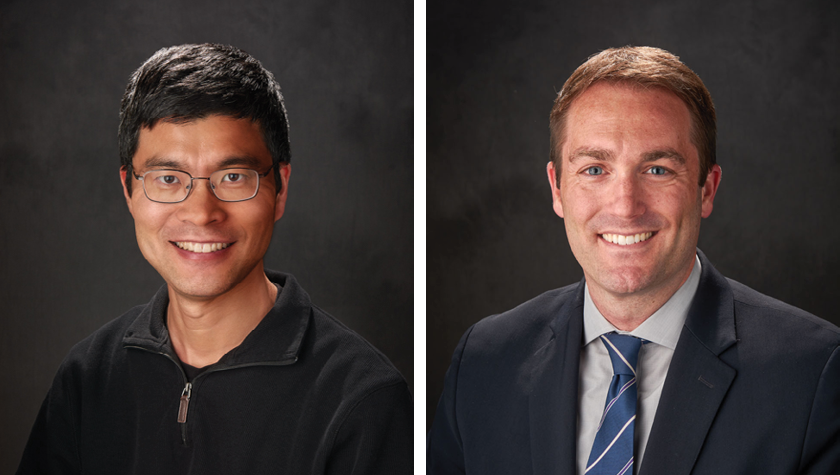 The Vilas awards and professorships are some of the University of Wisconsin–Madison’s most prestigious honors. Named after UW–Madison law professor William F. Vilas — who served as a UW regent, a U.S. senator, and the U.S. Secretary of the Interior — they recognize faculty who’ve made exceptional contributions to their fields, gaining national and international prominence while furthering the university’s research mission.

This year, two UW–Madison School of Pharmacy professors are being honored with Vilas awards: Weiping Tang, ​​Janis Apinis Professor of Pharmaceutical Sciences and director of the Medicinal Chemistry Center, is receiving a Distinguished Achievement Professorship, and Warren Rose, associate professor in the Pharmacy Practice and Translational Research Division, has received a Mid-Career Investigator Award.

The professorship provides five years of flexible funding, while the mid-career award provides three. Both Tang and Rose are known for their teaching excellence and their relentless pursuit of knowledge. With this funding boost, their labs are likely to be busier than ever.

Professor Weiping Tang’s list of accolades is almost as long as his list of published research papers. It includes a named professorship awarded in 2019, a 2018 Vilas Mid-Career Investigator Award, a 2011 Amgen Young Investigator Award, and a 2010 Journal Award from the editorial board of the journals Synlett and Synthesis.

Curiosity, stamina, and a drive to discover are just a few parts of Tang’s equation for success. He’s also skilled at helming interdisciplinary teams that can tackle a research question from numerous angles. The teams he assembles specialize in drug discovery, especially areas such as medicinal chemistry, chemical biology, and assay development.

For instance, Tang partnered with a globally recognized influenza expert — Professor Yoshihiro Kawaoka of the UW School of Veterinary Medicine — to develop compounds that can induce degradation of proteins most coronaviruses need to replicate themselves. This work is tied to a two-year National Institutes of Health grant to gather proof-of-concept data for antiviral therapeutics designed to address coronaviruses such as SARS CoV-2, the virus that causes COVID-19.

“Most coronaviruses use the type of viral protein we are targeting with our degraders,” he explains.

In the world of coronavirus therapeutics, drug discovery typically focuses on inhibitors that prevent the virus from replicating. Sometimes, though, a strain of the virus will become resistant to an inhibitor. For those strains, protein degraders can stop the virus from multiplying. Plus, they can act faster than inhibitors and are effective at lower doses.

To develop viral-protein degraders fit for coronavirus therapeutics, the Tang Research Group leveraged a platform they’ve been using to develop oncogenic-protein degraders, which destroy disease-causing proteins found in a range of cancers.

In addition to the intracellular protein targets mentioned above, Tang’s team recently developed a complementary strategy to degrade extracellular protein targets and demonstrated it on lab-grown liver cells. Antibodies with attached markers bind to problematic proteins, labeling them as unwanted. Another liver-cell protein finds these markers and moves the unwanted proteins to an area where they’re broken down into reusable parts. The researchers used this method to break down a variety of proteins, including EGFR, which is associated with certain types of lung and breast cancer. Afterward, they published their findings in ACS Central Science.

Interdisciplinary protein-degrader research is just one of the Tang Lab’s specialties. In collaboration with Professor Manish Patankar of the UW School of Medicine and Public Health, they also explore how complex carbohydrate conjugates might be used in ovarian cancer therapies. Treating this disease is especially difficult because ovarian cancer cells can hide from the immune system.

This work is funded by a grant from the UW Carbone Cancer Center. Tang has also received a sought-after U01 grant from the National Institutes of Health and an exploratory R21 grant for his innovative research on complex-carbohydrate synthesis.

Tang appreciates the flexibility of the funding the Vilas professorship provides.

“We can use it to pursue a new direction in our research,” he says.

Antibiotics were among the most revolutionary medical advances of the 20th century, but their impact is waning as some pathogens find ways to adapt and survive.

According to the World Health Organization, antibiotic resistance is one of the most serious threats not only to global health, but also to food security and economic development worldwide. It’s associated with higher medical costs, longer hospital stays, and elevated mortality rates.

Warren Rose is fighting this mounting problem with translational research.

“I’m trying to develop effective solutions and stay a step ahead of an organism that’s constantly changing,” he says.

Rose’s team is especially interested in bringing new life to older antibiotics that have fallen out of favor.

“We’re looking at how older drugs might be able to work in combination with newer agents that certain bacteria have become resistant to and finding out what patient populations might benefit from that combination,” Rose says.

In some cases, when a particular type of bacteria develops resistance to a newer antibiotic, it will become susceptible to an older antibiotic that it had been resistant to in the past. In other cases, when a newer drug starts losing effectiveness against certain bacteria, an older drug can help it bind to the pathogen it’s intended to eradicate.

“I’m trying to develop effective solutions and stay a step ahead of an organism that’s constantly changing.”
—Warren Rose

The Rose Lab also uses clinical studies to assess whether an antibiotic is functioning optimally in fighting serious infections. These studies examine host-pathogen interaction to help develop better standards of care for patients whose immune systems make certain antibiotics less effective. Instead of exposing bacteria to antibiotics in the lab and observing what happens, a team studying human host environments investigates how treatment outcomes for invasive infections are affected by a patient’s innate immune response. This involves modeling how some types of human cells influence an antibiotic’s response to a pathogen.

“Sometimes a patient’s infection won’t respond to an antimicrobial agent the way we’d expect it to,” Rose explains. “We’re trying to understand why and determine which clinical markers make these patients high-risk so we can find more effective antimicrobials for them and so clinicians can intervene faster,” Rose says.

An interest in human host environments also helped Rose discover that beta-lactams in human-like environments may be able to destroy certain strains of MRSA.

Rose discovered his interest in infectious-disease research during his residency at Chicago’s Rush University Medical Center. This led to a fellowship at Wayne State University’s Anti-Infective Research Laboratory. Rose also holds a PharmD from Butler University and a Master’s in Public Health from UW–Madison.

In addition to teaching courses such as PHMPRC 559: Introduction to Infectious Diseases Pharmacotherapy and PHMSCI 540: Drug Delivery, Rose mentors PharmD students and holds clinical appointments at UW Health and the William S. Middleton Memorial Veterans’ Hospital. On the research side, he has published more than 25 papers over the past four years. This brings his grand total to more than 100.

The Vilas Mid-Career Investigator Award will help the Rose Lab explore new lines of scientific inquiry. And if Rose’s track record is any indication, there will be more laurels in his future.