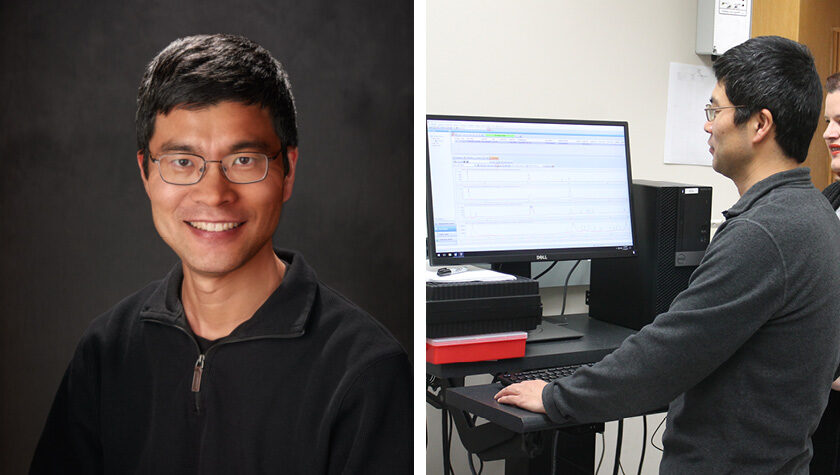 Weiping Tang, professor in the Pharmaceutical Sciences Division and director of the Medicinal Chemistry Center.

Most small-molecule pharmaceuticals work by disrupting a target protein’s function — preventing it from catalyzing a reaction or binding to another protein, for example.

Although many molecules may bind to a protein target, it can be quite difficult to find one that will alter its function in the desired way, says Weiping Tang, a Janis Apinis Professor in the Pharmaceutical Sciences Division of the University of Wisconsin–Madison School of Pharmacy and director of the Medicinal Chemistry Center. And for therapeutic purposes, he notes, “a small molecule that can bind to a protein but doesn’t change the function is almost useless.”

Tang and his lab group are working to change that, developing targeted molecular tools that can trigger selective degradation of disease-causing proteins. Upon binding to the protein of interest, these proteolysis targeting chimeras, or PROTACs, engage the body’s natural mechanisms to destroy the unwanted proteins.

Although the first PROTACs were shown to work in cells and animals just five years ago, they have already generated a great deal of interest as potential clinical and research tools, Tang says. But the time and effort required to design, synthesize, and test them have been major limitations for their wider adoption. Tang’s expertise in chemical synthesis and preparation of small molecules is a natural fit for developing faster, more efficient ways to make and test PROTAC degraders to target a wide variety of proteins.

“Many diseases are caused by the overexpression of proteins, such as oncogenic proteins. We can use this mechanism to downregulate them,” he says. “We believe this is a game-changing technology for small molecule drug discovery.”

PROTACs offer several potential advantages over other protein-targeting methods. They are often effective at lower doses than traditional drugs because they need only bind their target long enough to tag it for destruction. Tang’s group and others have found that PROTACs can target specific protein isoforms or cell types. And for many disease-related proteins, it’s not obvious how to use a small molecule ligand to change or block an unwanted function, Tang says. PROTACs offer a novel way to tackle these so-called “undruggable” targets. They could also render some “failed” drug candidates useful since they need only bind to the protein of interest to initiate its destruction.

In addition to their therapeutic potential, PROTACs can also serve as powerful research tools. Tang compares PROTAC degraders to genetic methods such as CRISPR and short interference RNA, which can modify genes to interfere with the function of the resulting protein. However, the effects of genetic changes unfold slowly as the body turns over old proteins and makes new ones.

“We believe this is a game-changing technology for small molecule drug discovery.”
—Weiping Tang

“Small molecule degraders have a much faster effect. Sometimes we can see the degradation in just a few hours,” Tang says. What’s more, the effect may last longer because it takes the body time — hours, days, or even weeks — to replace the degraded proteins.

In collaboration with UW–Madison oncology researchers, including Jing Zhang and Wei Xu, Tang’s group has successfully targeted multiple cancer-related proteins. In papers published in the last two years, they have shown that PROTAC degraders can reduce cell proliferation in myeloma and breast cancer cell lines. This August, Tang received a grant from the National Institutes of Health to apply a similar approach to target the SARS-CoV-2 virus that causes COVID-19.

Tang is also the principal investigator for a UW2020 project that received support in July to build a targeted protein degradation platform that will speed basic and translational research at UW–Madison. With this funding, his team is creating libraries of partially pre-assembled PROTACs that are ready to be combined with ligands against researchers’ proteins of interest. The tools are applicable to many research areas where protein knockdown is desirable, he says. “Then collaboration is key. We create the tools that biologists can use to advance their studies.”

However, a challenge with small molecules is that they are slow and difficult to develop. Whereas reagents for genetic methods such as those used for RNA interference can be ordered from biotech companies, small molecules must be synthesized. And with three components per degrader, Tang says, “it’s very labor-intensive to develop a PROTAC molecule for a given protein target.” He is using his experience in medicinal chemistry to lower that barrier and make these tools more accessible.

Each PROTAC consists of three parts: a molecule that binds to an ubiquitination enzyme, a molecule that binds to the protein of interest, and a linker that joins the two to bring them into close proximity. When fully bound, the molecule recruits an enzyme that attaches a molecular tag called ubiquitin to the protein of interest, marking it for destruction by the cell’s protein recycling system.

The synthesis process involves building multiple candidates for each component and experimenting with linkers of different lengths and different chemical properties. It can take a chemist several months or even years to develop an effective degrader from several dozens of candidates, Tang says.

To accelerate the process, his group spent a year assembling a library of PROTAC building blocks during a pilot study. Now an individual can produce roughly 100 PROTACs against a selected protein in just a few days by combining the library with a selection of appropriately functionalized ligands of the protein of interest. Tang’s group has also developed methods, published this spring in ACS Chemical Biology, to rapidly screen through the resulting PROTACs to identify the most effective degraders.

“We can generate dozens to a couple hundred molecules, and then this can be used for any target,” he says.

They are also in the process of expanding the number of ubiquitination enzymes used in PROTACs to make the molecules even more versatile. There are more than 600 different of these E3 ubiquitin ligases coded in the human genome, but just two — cereblon and VHL — are now widely used for targeted protein degradation. These have been extremely useful for advancing the technology, Tang says.

“Based on our and others’ experiences, more than 75 percent of protein targets can be degraded using ligands of these two E3 ligases,” he says. But he is working to develop additional E3 ligases and expand the pool of binding molecules to better overcome resistance issues and improve selectivity.

“Drug discovery is a complex issue. You cannot predict which compound will actually make it through all the hurdles and get to the market,” Tang says. “The more tools you have, the better chance that you have success down the road.”