A Carbohydrate-Based Solution to Ovarian Cancer 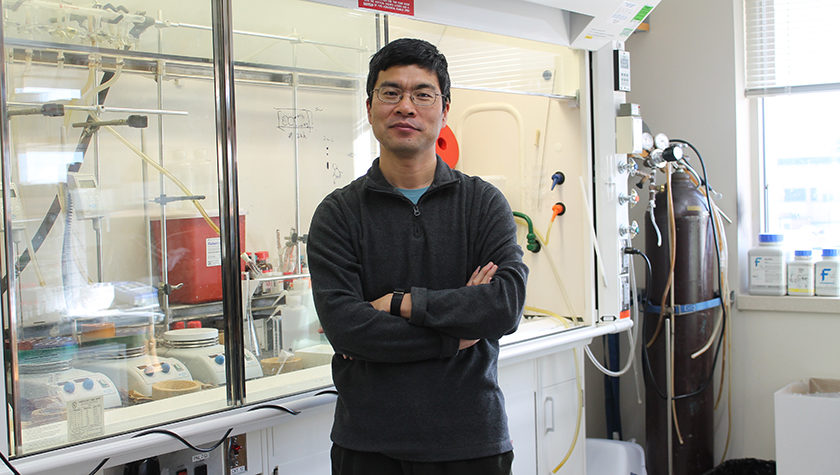 Weiping Tang, professor in the School of Pharmacy's Pharmaceutical Sciences Division and director of the Medicinal Chemistry Center.

According to the American Cancer Society, ovarian cancer affects just under one in 80 women. Current treatments, such as chemotherapy, radiation, and hormone therapy, work for ovarian cancer, but not as effectively as for other common cancers.

One of the prevailing theories behind why ovarian cancer is so difficult to treat is that these cells are essentially able to hide from the human immune system.

“The human immune system has the ability to attack abnormal, aka cancerous, cells,” says Professor Weiping Tang, Janis Apinis Professor in the University of Wisconsin–Madison School of Pharmacy’s Pharmaceutical Sciences Division and director of the Medicinal Chemistry Center. “However, certain cancer cells — like those in ovarian cancer — have developed mechanisms to avoid being attacked by our immune system.”

Tang, with collaborator Manish Patankar, a professor in the UW School of Medicine and Public Health, will soon explore these mechanisms in the search for new methods to treat ovarian cancer. Specifically, with grant funding from the UW Carbone Cancer Center, Tang and Patankar will be looking at carbohydrates as a potential key to uncloaking ovarian cancer.

“Certain cancer cells — like those in ovarian cancer — have developed mechanisms to avoid being attacked by our immune system.”
—Weiping Tang

The synthesis of complex carbohydrates has become a major focus of the Tang Lab, and he’s quickly become a renowned expert in the area. In recent years, he’s received numerous grants for his innovative research, including a prestigious U01 grant from the National Institutes of Health to develop new synthetic methods and an exploratory R21 grant to develop a general approach to streamline the process of accessing challenging carbohydrates.

Tang explains that carbohydrates, particularly a complex kind known as sialic acid-containing oligosaccharides, are involved in the interactions between immune cells and many other cells, including ovarian cancer cells.

“Dr. Patankar has a long history of studying sialic acid binding proteins, and his knowledge complements what we already know about the relationship between carbohydrates and cancer,” says Tang. “Together, our goal is to develop novel small molecules that can reactivate the body’s immune cells to kill cancerous cells.”

Ovarian tumor cells feature a protein on their surface called MUC16, and this protein bears nothing but bad news: MUC16 promotes the metastasis of ovarian tumors throughout the peritoneal region, which includes the abdominal and pelvic cavities, hinders the efficient treatment of tumors by therapeutics, and prevents immune cells from recognizing the tumor. In essence, MUC16 is an immunological invisibility cloak that doesn’t allow immune cells to recognize and subsequently fight cancer cells.

Like a majority of proteins, MUC16 is glycosylated, which means that multiple carbohydrates are attached to it. Some of these carbohydrates are sialic acids, which bind to proteins called Siglec-9 that are featured on the surface of immune cells. Unfortunately, when Siglec-9 binds to sialic acid residues on MUC16, it initiates an inhibitory signal that dampens the body’s natural immune response to foreign bodies. Tang and Patankar hypothesize that disrupting the interaction between MUC16 and Siglec-9 could reactivate the body’s natural defense system.

“Our carbohydrate chemistry expertise matches perfectly with Dr. Patankar’s glycobiology and cancer immunotherapy expertise,” Tang said. “We look forward to a better understanding of how the MUC16-Siglec-9 binding event influences the ovarian tumor microenviroment and the body’s immune response.”

Thanks to his recent Vilas Mid-Career Investigator Award, which allowed him to hire a lab manager with a master’s degree in biomedical engineering, the Tang group acquired the capability to use phage display as a screening platform. Phage display is a technology where billions of phages that have been genetically engineered to each express a different peptide sequence on their surface can be screened against potential target proteins of interest. Tang plans to employ this powerful platform to identify compounds that can potentially interrupt MUC16-Siglec-9 binding.

“It has become very clear to everyone in the field that just using one drug is probably not going to be enough.”
—Manish Patankar

“Through the Vilas award, we developed the capability to create and screen billions of novel DNA-barcoded glycopeptides derived from bacteriophage,” says Tang. “Now, we will use this glycopeptide library to identify therapeutic candidates that will interrupt the binding event and ideally prevent the inhibitory effect of MUC16 on the immune system.”

The preliminary data from this grant will provide the foundation for additional grant applications to fuel future work with both in vitro and in vivo models.

If Tang’s plan for Siglec-9 works, the ligands could be applied to other cancers beyond ovarian cancer. Pancreatic tumors, for example, also produce high levels of MUC16, meaning the compounds could be effective for those cells as well. The phage display strategy can also be extended to many other protein targets involved in tumor or other disease processes.

“Our long-term goal is to develop new strategies against ovarian cancer,” Patankar said. “It has become very clear to everyone in the field that just using one drug is probably not going to be enough. We will have to use combination therapies that will include not only a straightforward type of chemotherapy agent but also some type of therapy that will induce the immune cells to react against the tumor.”