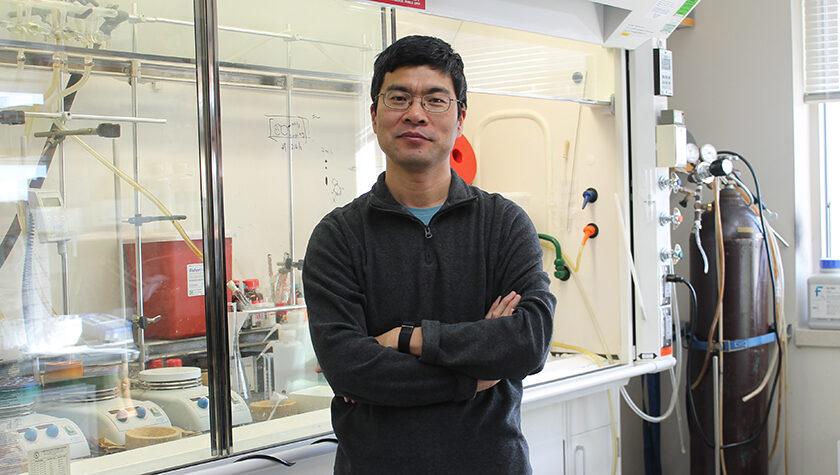 Scientists at the University of Wisconsin–Madison have developed a way to use a cell’s own recycling machinery to destroy disease-causing proteins, a technology that could produce entirely new kinds of drugs.

Some cancers, for instance, are associated with abnormal proteins or an excess of normally harmless proteins. By eliminating them, researchers believe they can treat the underlying cause of disease and restore a healthy balance in cells.

The new technique builds on an earlier strategy by researchers and pharmaceutical companies to remove proteins residing inside of a cell, and expands on this system to include proteins outside or on the surface of liver cells.

“In the past, to develop a new drug, we often needed to find a molecule that bound to the protein of interest and also changed the function of the protein. But there are many potential proteins associated with diseases whose function you cannot block easily,” says Weiping Tang, a professor of pharmacy and chemistry at the University of Wisconsin–Madison who led the new research. “With the targeted protein degradation strategy, we can go after many of those proteins.”

Tang, with colleagues in the UW–Madison School of Pharmacy, demonstrated the new method in proof-of-concept experiments on lab-grown liver cells. They were able to neutralize multiple extracellular proteins, including EGFR, a cancer-associated protein. The scientists published their findings March 4 in the journal ACS Central Science.

The technology works much like a city’s trash-collection system. Antibodies attach tags for destruction to specific proteins, marking them as unwanted. A shuttle protein on the liver cell, serving as a kind of garbage truck, recognizes these markers, engulfs the protein, and ferries it to the protein-digesting compartment of the cell, which breaks down the protein into reusable parts.

Many researchers over the past several years, including the Tang group, have developed tools to selectively target for destruction certain cellular proteins found on the inside of cells, named PROTACs. Multiple PROTAC-based drugs are now in clinical trials to treat several cancers.

The Tang lab is now expanding the scope of targets to additional proteins found outside of or on the surface of the liver cell. They have turned to the lysosome, a compartment of the cell that digests and destroys all kinds of materials, including what the cell engulfs from outside. Since the liver is the primary organ that breaks down proteins in the body, it is an ideal tissue to selectively degrade undesired proteins.

“I believe there’s a great future ahead of us, but we need to invest our resources and time to investigate the protein degradation strategy further,” says Tang.

To gain access to the lysosome, the researchers relied on a lysosome shuttle named ASGPR. The shuttle is primarily found on the surface of liver cells. It recognizes certain sugars on proteins and delivers the proteins to the lysosome for digestion.

To help encourage ASGPR to recognize and help destroy disease-causing proteins, researchers in earlier studies learned they could attach three specific sugars to the proteins. But first they had to figure out how to go about attaching them to the proteins they wanted to eliminate.

Tang’s group focused on antibodies, which are ideal candidates since they recognize and bind to specific proteins. The team attached the sugary tag that would activate ASGPR to an antibody that would track down the specific proteins they hoped to destroy. In this way, the scientists could shuttle the protein to the lysosome of liver cells with this highly targeted trash-collection system.

They tested their technology against several proteins, including EGFR, which tumors produce in excess. By attaching the sugary tag to an EGFR antibody, the scientists were able to deplete a significant amount of the protein that otherwise accumulated outside of cancerous liver cells grown in the lab.

Tang’s lab is now working to refine the ASGPR method by making it more effective, and to expand the strategy to destroy proteins on the surface of other types of cells. They are also interested in collaborating with other researchers to help them test the removal of a wider array of disease-associated proteins.

“I believe there’s a great future ahead of us, but we need to invest our resources and time to investigate the protein degradation strategy further,” says Tang.