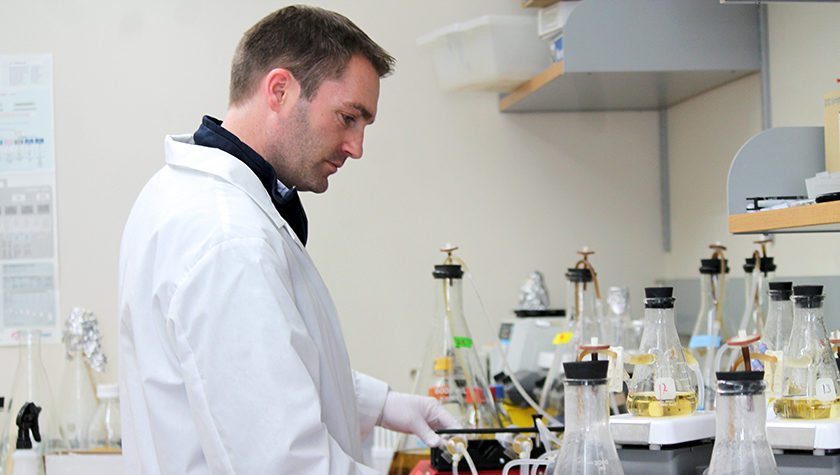 Associate Professor Warren Rose in his lab in the School of Pharmacy's Pharmacy Practice and Translational Research Division.

In 2017, methicillin-resistant Staphylococcus aureus, known more commonly as MRSA, caused more than 320,000 hospitalizations and nearly 11,000 deaths in the United States alone. Because of MRSA’s growing resistance to first-line antibiotics — including beta-lactams, widely considered to be the most successful antibiotic class ever discovered — the U.S. Centers for Disease Control has placed it among the top antibiotic resistance threats.

But new research by University of Wisconsin–Madison School of Pharmacy Associate Professor Warren Rose, published in Antimicrobial Agents and Chemotherapy (AAC), finds that select strains of MRSA might be vulnerable to beta-lactams in human-like environments.

“We are looking at ways that bacteria can respond to antibiotics, even though the routine lab tests for susceptibility says it’s resistant,” says Rose, who is in the School’s Pharmacy Practice Division. “We can screen them in different, more realistic ways and actually show an effective response.”

The routine test for MRSA susceptibility to antibiotics has remained largely unchanged since the 1960s: Bacteria are grown in a standard media, and antibiotics are introduced into the environment and their effects are measured.

But because this routine test doesn’t accurately represent a human host environment, Rose believes that some beta-lactam antibiotics could still be effective against MRSA.

“[Beta lactams] are an unparalleled drug class, and we want to evaluate whether we can bring them back.”
—Warren Rose

“One thing that’s always been a concern with standard media is that it is optimized for bacterial growth,” says Rose. “It contains soy digest with some animal proteins and is meant to maximize bacterial replication, which is in no way similar to the conditions within any vertebrate host.”

For the study published in the AAC journal, the Rose Lab substituted an alternative media in the routine tests that is designed to be a better predictor of therapeutic response in vivo. This media naturally contains amino acids and bicarbonate, a molecule naturally found within in the body that can turn off the gene that confers antibiotic resistance to MRSA. Bacteria still grow in this alternative media, which more closely mimics a human host environment, but not as vigorously as in standard media.

“We wanted to see if we could have an effect with a normal level of bicarbonate, which is around 20 to 25 mmol/L (millimoles per liter), or if we would have to augment patients’ levels with an additional supplement,” says Rose. “In our studies, we get a better response the more bicarbonate that’s present in the media, but we still get very effective activity even at a normal physiological concentration.”

Building on previous research that found oxacillin and cefazolin activity against two strains of bicarbonate-sensitive MRSA, Rose and his collaborator, Arnold Bayer at the University of California, Los Angeles Biomedical Institute, simulated a common real-world infection to investigate how this method would translate to an even more realistic environment.

Endocarditis, a complication caused by MRSA, occurs when bacteria attach themselves to damaged heart valves, resulting in a growth known as a vegetation. The bacteria in the vegetation can further damage the heart valves, all while releasing additional bacteria into the bloodstream.

“We are using the SEV model as screening tool to understand the extent of beta-lactam activity,” says Rose. “The SEV model allows us to replicate different doses that might be administered to patient and better understand a human response.”

Moving forward, Rose and Bayer hope to reintroduce these two antibiotics in a clinical environment, for patients with susceptible MRSA strains.

Rose’s research to breathe new life into current antibiotics, particularly beta-lactams, is crucial, because resistance is occurring faster than new drugs can be developed.

“If you look at antibiotics as a whole, there are limited options being developed because of economic reasons,” says Rose. “Besides antibacterial effects, beta-lactams are safe to administer in large doses, known to boost innate immune responses, and are very potent when bacteria are susceptible to them. They are an unparalleled drug class, and we want to evaluate whether we can bring them back.”