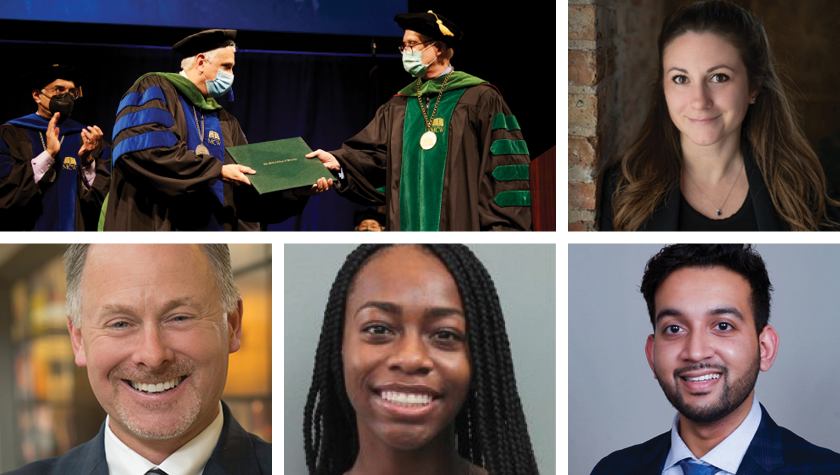 Cierra Brewer (PharmD ’21) has matched with a PGY1 residency program at the Orlando VA, starting in June 2022.

Miranda Bowers (PharmD ’20) has accepted a position as a critical care pharmacist at Duke University Hospital in Durham, N.C.

Lee Vermeulen (MS ’92) has been selected as American Association of Colleges of Pharmacy executive vice president and CEO.

Joohyun Park (MS ’17, PhD ’19) has been named one of the University of Wisconsin–Madison School of Pharmacy’s 2022 Five of the Future, which recognizes recent alumni who are shaping their fields.

Jevon Oliver (MS ’18) is featured as one of the University of Wisconsin–Madison School of Pharmacy’s 2022 Five of the Future, which recognizes recent alumni who are shaping their fields.

Dalia Saleh (PharmD ’14) is featured as one of the University of Wisconsin–Madison School of Pharmacy’s 2022 Five of the Future, which recognizes recent alumni who are shaping their fields.

Ed Portillo (PharmD ’14) is awarded a five-year grant from the Veterans Health Administration to support the expansion and evaluation of his COPD CARE (chronic obstructive pulmonary disease coordinated access to reduce exacerbations) service.

Laurel Legenza (PharmD ’13) is on a winning team in the 2021 National Center for Health Statistics/AcademyHealth Data Visualization Challenge. Their winning visualization compares overdose and suicide rates.

Richard Gantt (PhD ’12) is featured as one of the University of Wisconsin–Madison School of Pharmacy’s 2022 Five of the Future, which recognizes recent alumni who are shaping their fields.

Anna Engstrom (BS ’11) is featured as one of the University of Wisconsin–Madison School of Pharmacy’s 2022 Five of the Future, which recognizes recent alumni who are shaping their fields.

Kate Hartkopf (PharmD ’08) is honored as a 2022 Master Preceptor by the American Association of Colleges of Pharmacy.

Erin Narus (PharmD ’03): “I recently finished my master’s degree in jurisprudence, health and hospital Law from Seton Hall University, all while continuing to lead the Alaska Medicaid Pharmacy Program and serving a key role on the COVID-19 vaccine rollout team for the state in 2020-2021. Definitely a busy past 2 years!”

Allison Gardner (BS ’99) is honored as the University of Wisconsin–Madison School of Pharmacy’s 2022 PharmTox Alumnus of the Year.

George MacKinnon III (BS ’88, MS ’90) received the honorary degree, Doctor of Medical Sciences, from the Medical College of Wisconsin, alongside the PharmD Class of 2022 on May 20, 2022. In 2021, he was recognized as one of the “Notable Heroes in Health Care,” by Milwaukee BizTimes for his work in immunizations.

Tom McCourt (BS ’80) is honored with the 2022 President’s Award from the American Society of Gastrointestinal Endoscopy.

Joshua Diamond (PharmD ’21): “I have started working for Molina Healthcare in a remote position and have been able to spend much more time with my wife and travel. We have gone to Hawaii and Las Vegas most recently.”

Kishan Patel (BS ’17): “To fellow members of the Wisconsin School of Pharmacy,

It has been a journey after my time at UW–Madison. Since 2018, I have been completing my education in medicine at the Medical College of Wisconsin. In the coming months, I will be graduating medical school and applying for Radiation Oncology Residency. I look forward to what the next phase of life entails and am grateful for the support of my peers. I wish everyone success in their ambitions.”

Jessica Muth (PharmD ’12): “I just had a baby girl named Paige in January! Big brother Noah (3) is so excited!”

Robert Reichert (BS ’54): “It was an challenge going through pharmacy school at UW–Madison. I loved my occupation as a pharmacist, always happy to go to my pharmacy practice, which continued for 25 years. Every day was an adventure. I had six children, and only one followed my profession.”

Sarah Bland (BS ’86) passed away in May 2022. She spent many years of her career at the Wisconsin Poison Control Center, where she helped optimize antibiotic use. She later served as director of pharmacy at the Richland Center Hospital, as well as worked as a consultant to improve electronic medical records for patient safety. She was a wonderful baker and cook and used her talents to help people feel at home.

James Ehlers (BS ’77) passed away in March 2022. Originally intending to become a veterinarian, James was instead swayed into pharmacy school in his second year of college. He felt his pharmacy colleagues were his family, and practiced around Wisconsin, including Menomonee Falls, Marinette, Fond du Lac, Milwaukee, Mauston, and more. He enjoyed cruises with his family and visiting his Florida home with family.

Mark O’Connell (BS ’77) passed away in May 2022. After pharmacy school, he started his career at Strudell Pharmacy in Sun Prairie, Wis., and 10 years later, took ownership of the pharmacy and renamed it O’Connell Pharmacy. Later, he also acquired Holt Pharmacy. When not behind the pharmacy counter, he enjoyed reading, fishing, sports, spending time in his Las Vegas home, and cherishing family moments.

Trudi Makoid (BS ’68) passed away in May 2022. She loved the outdoors, botany, drawing plants, and spending time with her two children. In her practice, she particularly enjoyed serving the veteran community in the Madison area and hearing their stories.

John Hughes (BS ’61) passed away in March 2022. He served the military for two years in France, beginning in 1962, and was later reassigned to Fort Dix, N.J., to begin a training program to handle casualties in the field. After his service, he opened Hughes Pharmacy in Lancaster, Wis., with his cousin. He had many hobbies, including recreational aviation, motorcycling, boating, and traveling.

Karl Marquardt (BS ’59) passed away in March 2022. After pharmacy school, he received a Juris Doctorate in law and became a patent attorney for Dow Chemical, executive director of the Pharmacy Examining Board, and attorney for the Wisconsin Department of Agriculture – Trade and Consumer Protection. He also spent time as a naval officer in the Naval Medical Service Corps and chief of pharmacy services at the U.S. Naval Hospital in Charleston, S.C. He was very active in his community, loved spending time with his four children and grandchildren, travel, reading, skiing, and more.

Donald Dreier (BS ’58) passed away in April 2022. Throughout his career in Appleton, Antigo, and Shawano in Wisconsin, including his own Dreier Pharmacy, he was focused on serving his customers with kindness. He enjoyed spending time outside and on water, as well as working on the farm and raising Arabian horses.

Wayne Hoffman (BS ’56) passed away in May 2022. After graduating pharmacy school, he married his wife, Margaret, with whom he would spend 64 years. Together, they would take over Bowman’s Drugstore in Port Washington, Wis., which they ran for many years. He enjoyed being active in his community, playing horseshoes and golf, and traveling with his wife to 47 states and many countries.

Frank McNamara (BS ’56) passed away in May 2022. An Army veteran, he was a Rho Chi graduate of the School of Pharmacy. For more than 40 years, he was owner and operator of Home Care Pharmacy, the Beloit Clinic Pharmacy, and McNamara’s Pharmacy until he retired in 1996.

Robert Hebl (BS ’53) passed away in March 2022. A Korean War veteran, he worked for more than 20 years at Rennebohm Drug Store in Madison, Wis., before owning Service Drug Store in Portage, Wis., in 1972.

Jean Bauer (BS ’50) passed away in June 2022. She practiced as a pharmacist in Rockford, Ill., as well as Waukesha and Milwaukee, Wis., for more than 40 years. In her retirement, she served on the board of St. Vincent de Paul and volunteered at the Sauk Prairie Hospital. 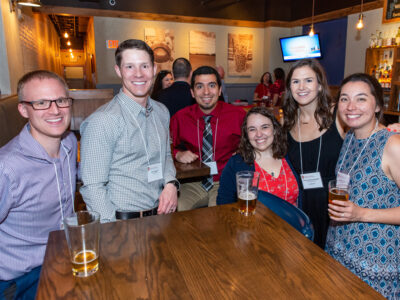