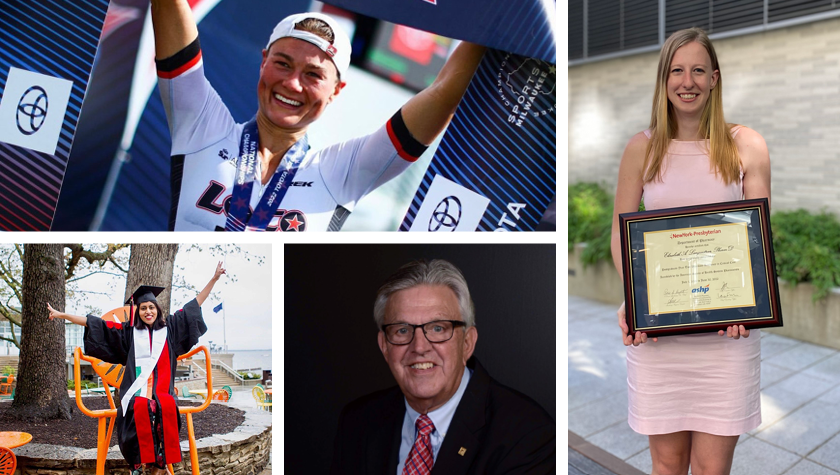 Drew Dretske (PharmD ’20, MS ’22) is starting a new role as the specialty pharmacy manager at Children’s Health in Dallas, Texas.

Owen Miller (PharmD ’22) is starting a clinical neurology research fellowship at the Skaggs School of Pharmacy and Pharmaceutical Sciences.

Elizabeth Langenstroer (PharmD ’20) recently completed a PGY2 in critical care at NewYork-Presbyterian and is excited to start her new role as a critical care pharmacist at Vidant Medical Center in Greenville, N.C.

Niyanta Kumar (PhD ’18): “I started a new role as principal scientist, DMPK, at Mersana Therapeutics in Cambridge, Mass., working at the cusp of large and small molecules to help bring the next generation of antibody drug conjugates to the fore. I look forward to connecting with fellow Badgers in the Boston-Cambridge area!”

Olufunmilola Abraham (MS ’11, PhD ’13) has been promoted to associate professor in the UW-Madison School of Pharmacy’s Social and Administrative Sciences Division.

Casey Gallimore (PharmD ’05, MS ’13) has been promoted to full professor in the UW-Madison School of Pharmacy’s Pharmacy Practice and Translational Research Division.

Michael Nagy (PharmD ’16) is honored with the Pharmacy Society of Wisconsin’s 2022 Curtis A. Johnson award.

Anita Kashyap (PharmD ’12) is honored with the Pharmacy Society of Wisconsin’s 2022 Young Pharmacist of the Year award.

Maria Wopat (PharmD ’10) is honored by the UW-Madison School of Pharmacy’s Pharmacy Alumni Association as the 2022 Young Alumnus of the Year.

Beth Martin (BS ’90, MS ’03, PhD ’06) was part of a team that earned the Best Collaborative Publication Award from the American Association of Colleges of Pharmacy, for a paper detailing a team-based approach to effective early warning and intervention.

Sarah Sorum (PharmD ’05) is honored by the UW-Madison School of Pharmacy’s Pharmacy Alumni Association as the 2022 Alumnus of the Year.

Nate Rickles (MS ’99, PhD ’03) has been selected as a 2022 Academic Leadership Fellow of the American Association of Colleges of Pharmacy.

Jason Lau (PharmD ’01) is the 2022-23 president of the UW-Madison School of Pharmacy’s Pharmacy Alumni Association.

Michelle Farrell (BS ’99, PharmD ’00) is named the Community Pharmacy Enhanced Services Network’s (CPESN) 2022 Most Valuable Pharmacist. Farrell is also honored with a 2022 Citation of Merit from the UW-Madison School of Pharmacy.

Julie Thiel (BS ’98) is honored as the Pharmacy Society of Wisconsin’s 2022 Pharmacist of the Year.

Jeanine Krueger (BS ’80) is honored with the Pharmacy Society of Wisconsin’s 2022 Bowl of Hygeia Award.

Ron Sorkness (BS ’72) is honored with a 2022 Citation of Merit from the UW-Madison School of Pharmacy.

Jack Hunter (MS ’63): “Pat and I moved to an assisted living home in San Ramon, Calif., in the east Bay Area after 55 years in Bellevue, Wash. I had my lower right leg and foot amputated a year ago, and I am doing well with a prothesis. We live near our daughter and family in San Ramon. I retired as a pharmacist from Rite Aid in 2004. A fun game part of my job for eight years was team pharmacist for the Seattle Seahawks of the National Football League. I can be reached by old acquaintances at jack.b.hunter@gmail.com or 425-213-4587.”

David McKee (BS ’74) passed away in July 2022. He was a dedicated pharmacist for many years in the Fort Atkinson, Wis., community, but his true “calling” was being a full-time grandpa.

Arden Thorsbakken (BS ’54) passed away in August 2022. After graduating from the School of Pharmacy, he served as a 1st Lieutenant in the Army during the Korean War. When he returned to Wisconsin, he practiced pharmacy for several years until he decided to pursue a career in dentistry. He holds eight patents, wrote several children’s books, and loved spending time with his family.