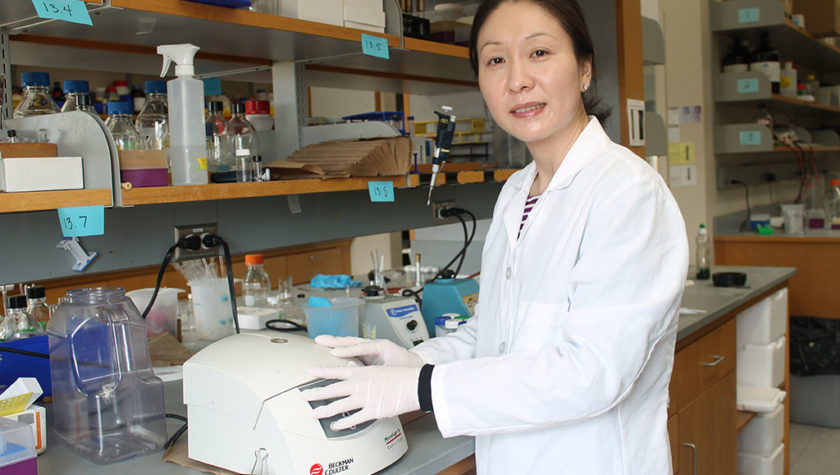 Jiaoyang Jiang is deep into the investigation of a biological whodunit—except, in this case, she already has two suspects. But she needs to uncover the how, the where, and the when to potentially change the way we understand and treat significant human diseases, ranging from Alzheimer’s to cancer.

As an assistant professor of pharmaceutical sciences in the University of Wisconsin–Madison School of Pharmacy, Jiang studies how chemical modification of proteins affects their function. She has dedicated herself to understanding two enzymes, OGT and OGA, that hold the clues to a system that defies many of the usual expectations of protein biology.

In some ways, OGT and OGA act like typical protein-modifying enzymes: They move a particular type of sugar-based chemical group, called N-acetylglucosamine (GlcNAc) onto or off of protein molecules. The process, called O-GlcNAc modification, can have dramatic effects on the target proteins’ properties and activity. But OGT and OGA are very atypical in that they’re the only two enzymes that can make these changes on thousands of proteins inside our cells.

Tacking extra molecular groups onto proteins is very common in biology—one of nature’s ways of finessing the activity of a finite number of proteins to accomplish a seemingly infinite number of tasks. There are dozens of types of these molecular add-ons—sugar groups, phosphate groups, amino groups—and hundreds of enzymes in our bodies dedicated to adding and removing them from different proteins.

For O-GlcNAc, however, there are only two: OGT, a transferase, attaches GlcNAc onto protein molecules. OGA, a hydrolase, clips the sugar group off again. It seems simple at first glance.

But that apparent simplicity is one of its most surprising aspects, says Jiang. Why would our biological systems devote just two enzymes to controlling the modification of thousands of proteins that are essential for life and health?

“It’s totally odd. In the human body, we have nearly 300 enzymes for adding sugars. Why bother to just have one for this particular sugar modification?” Jiang says. “It’s an area waiting for new tools, new approaches, and new discoveries.”

O-GlcNAc modification plays an essential role in a vast array of cellular processes. Combined, OGT and OGA modify at least 4,000 different proteins in the human body, Jiang says. If you disable OGT in a developing cell or animal, the cell dies. And O-GlcNAc dysregulation has been identified in Alzheimer’s disease, Type II diabetes, cardiovascular disease, and nearly every type of cancer.

To further complicate the critical function of this unusual system, O-GlcNAc modification is also unusually dynamic. Other types of sugar modification use more of a “one and done” approach, where once a sugar group is tacked onto a protein, it stays there for the lifetime of the protein. O-GlcNAc can be added and removed quickly and repeatedly, allowing it to regulate protein functions in response to conditions such as stress and nutrient levels.

In addition, OGT and OGA don’t seem to follow the usual rules of protein modification. Normally, such enzymes hone in on a characteristic sequence of amino acids in their target proteins. These so-called conserved sequence motifs can be used to identify likely recipients of the modification. But OGA and OGT don’t appear to use conserved sequences. In fact, Jiang and other researchers haven’t yet been able to identify any strict sequence motifs in where OGT and OGA act.

“We are talking about a unique type of sugar modification,” Jiang says. “It has very broad implications in human health. My lab is trying to understand how OGT and OGA regulate this modification on so many proteins and what roles this modification plays in health and disease.”

This brings us back to the how, when and where of the mystery. What determines where the sugar is added, or when it is removed? How does O-GlcNAc affect proteins once it is attached? To tackle such broad questions, Jiang’s group is using as many different techniques from as many disciplines as possible.

A multidisciplinary approach “is very important for our research because we are not limited to what techniques we know to answer questions,” Jiang says. “We can ask the questions we are most interested in, and then keep learning new things that can address those questions.”

She strives to populate her lab with students and postdoctoral researchers with varied backgrounds: biochemistry, organic chemistry, structural biology, chemical engineering and proteomics, for example. Together, they create a “highly interdisciplinary and highly collaborative” environment where students can work together and learn from each other, she says.

Jiang also builds collaborations both on and off campus to expand the team’s pool of expertise. She is part of a new collaboration that recently won funding through the Wisconsin Alumni Research Foundation’s UW2020 program to bring to UW–Madison a powerful technology for analyzing protein binding and molecular interactions. The new capability will allow them to analyze protein binding and protein-sugar interactions with greater sensitivity and speed than previously possible.

“We can ask the questions we are most interested in, and then keep learning new things that can address those questions.” –Jiaoyang Jiang

Those improvements are especially important as she looks toward potential therapeutic applications, where specificity and sensitivity are critical. Many existing drugs for cancer and other diseases target other protein modification pathways. But there are not yet any FDA-approved drugs that target O-GlcNAc modification.

Jiang hopes to help change that. But first, researchers need to know a lot more about what controls the enzymes’ activity and specificity. One way to do that is to examine their structure.

As dynamic parts of a working machine, our body’s proteins are in constant motion: morphing shape, shifting location, connecting and releasing binding partners in a cellular dance. Protein structures can provide important clues to their functions, but their dynamic nature can make it hard to get a good look at them. Like a frustrated parent’s photos of an active toddler, images often end up blurred and out of focus.

For a finer view of a protein’s structure, scientists must crystallize it. A crystal structure is like a freeze-frame in a movie, where time suddenly stands still and the camera rotates around the protagonist mid-action. For proteins, this allows scientists to peer more closely at the molecular structure as captured in one moment in time.

But it’s a difficult process, requiring a large amount of extremely pure protein. Some proteins lend themselves to the process more easily than others. Large human proteins are often harder, as are those that naturally have floppier, more flexible structures. OGA and OGT have both of those challenges. Jiang helped solve the crystal structure of the active portion of OGT and study how it works while she was a postdoctoral fellow, but OGA was more elusive.

Scientists had been trying to crystallize human OGA ever since its discovery in 2001, Jiang says, but were stymied for more than 15 years. Finally, last year, her group and two others simultaneously solved the first crystal structure, successfully crystallizing a shortened version of OGA that contained the functional core of the enzyme. The three studies independently confirmed yet another surprise: OGA works as a pair, with dual copies of the protein nestling together like two cupped hands to form the sugar-handling pocket.

Jiang’s group also went a step further and crystallized OGA in combination with some of its binding partners, including a small molecule that acts as a potent inhibitor of the enzyme and five different O-GlcNAc-modified substrates.

What they’ve learned about the structure is giving them a better understanding of how the enzyme physically interacts with O-GlcNAc-tagged proteins as it prepares to clip off the sugar—and how it can recognize so many different substrates. With funding from an R01 grant from the National Institutes of Health (NIH), her group is exploring additional binding interactions to look for molecular signatures of dysregulation.

“Hopefully this knowledge will help us to understand in the future how cleaving the sugar modification off certain substrates would be faster or more favorable than others,” she says, as well as to develop molecules that selectively interfere with specific targets.

In recognition of the magnitude of her early accomplishments, Jiang was recently selected as the winner of the 2019 David Y. Gin New Investigator Award from the American Chemical Society (ACS). The award recognizes a single early-career scientist each year who has made outstanding contributions to research in carbohydrate chemistry. Jiang will give an award lecture at the 2019 Spring ACS conference to be held in Orlando, Florida.

Jiang’s growing understanding of OGA’s structure has also caught the attention of the pharmaceutical industry.

“This is a potential target for Alzheimer’s and it may have potential for other diseases,” Jiang says. “We think it could be very promising to use to work toward clinical trials.”

Her group is also investigating OGT and exploring its role in human disease. The unique characteristics of the O-GlcNAc system have prevented Jiang’s team from using many of the techniques traditionally used to study protein interactions. Fortunately, Jiang doesn’t let technical challenges stand in the way of a good scientific question.

Supported by a second NIH R01 grant, her group is now developing new tools, including a small chemical probe that binds to both OGT and its protein targets during the sugar transfer process. As OGT tacks a sugar onto a protein, the probe locks it in place. With this connection fused, then the scientists can tap back into the strength of some of the traditional ways to analyze substrate identification and binding.

The probes should help them study how the enzyme recognizes its binding partners and what happens when things go awry, Jiang says. “We hope they can help us understand the role of OGT in disease development.”

So far, each answer has led to more questions—which suits Jiang just fine.

“This is a challenging field, and relatively young,” she says. But clue by clue, she’s piecing together a better understanding of this biological mystery.

Learn more about research in the Jiang Lab. 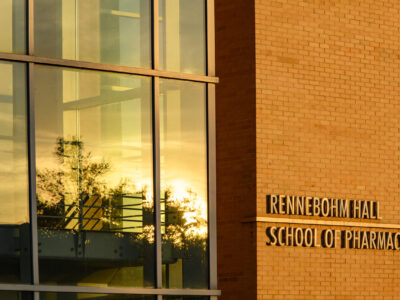