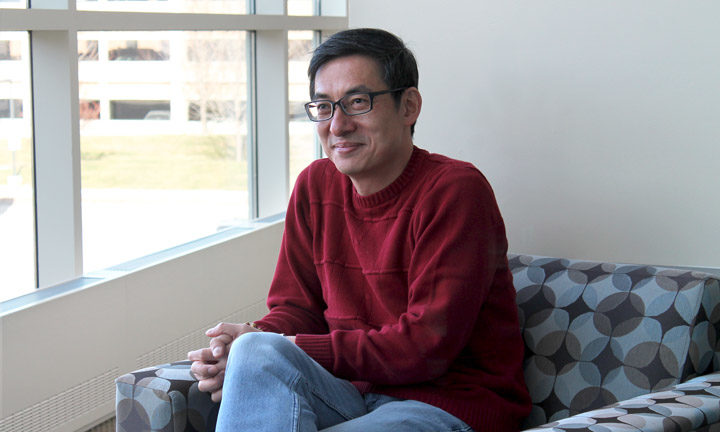 University of Wisconsin–Madison School of Pharmacy Professor Richard Hsung, the Laura and Edward Kremers Endowed Chair in Natural Products Chemistry, has been honored as a Vilas Distinguished Achievement Professor for 2017, a prestigious recognition of research contributions by professors who are nationally and internationally renowned.

“I’m honored and very appreciative of the recognition,” says Hsung. “The School of Pharmacy is a great place to do science, and I’m proud and happy to be part of it.”

“This is a competitive award and a testament to Richard’s research accomplishments,” says Burnette. “Richard is internationally well-known and extremely highly cited. His H index is over 50; he’s published extensively in very influential journals. His research is par excellence.”

The Pharmaceutical Sciences Division of the School of Pharmacy is comprised of three groups: drug discovery, drug action, and drug delivery. As part of the drug discovery group, Hsung’s research program has been focusing on developing new building blocks and methods amenable to rapid and economical assembly of structurally complex organic compounds. These chemical entities are either naturally occurring or de novo synthetically, and possess a diverse array of interesting biological activities as well as medicinal values, including anti-dementia potentials.

Hsung began his career as a solidly trained organic chemist, with some background in medicinal chemistry and understanding of certain disease areas. His first tenure-track faculty position was at the University of Minnesota, where he spent 10 years before joining the faculty at the UW–Madison School of Pharmacy in 2006.

At the University of Minnesota, Hsung’s interest in naturally occurring products from marine sources and terrestrial plants led his research group to a major finding: two functional groups, ynamides and allenamides. In organic chemistry, functional groups are atoms that give organic compounds their characteristic properties. Examples of functional groups include alcohol and ether.

“We found two functional groups, which are really just the building blocks people use to develop methods to construct more complex systems that can lead to drug discovery and materials discovery,” says Hsung. “We did something that the chemical world became interested in. After we came to Wisconsin, it took off.”

Now, Hsung estimates that about 100 research groups around the world, in fields including materials science, methods, and drug discovery, are following those two functional groups that his research group discovered.

“We made the initial finding, figured out how to make them expeditiously, and published the functional data with two or three people,” says Hsung. “We were overwhelmed when suddenly, dozens, and then a few hundred, research groups were working on it.”

When Hsung was recruited to come to UW–Madison, he was brought in as a senior faculty member at the level of full professor to work with Professors Ben Shen and Jon Thorson to establish a Wisconsin center for natural products-based drug discovery.

Burnette explains that Hsung’s expertise in novel synthetic schemes provides UW–Madison School of Pharmacy researchers, as well as other researchers worldwide, ways to develop compounds that would be very difficult, or even virtually impossible, to do otherwise.

“This gets down to developing a viable drug program,” explains Burnette. “It’s all about efficient, safe, economical synthetic schemes that can be scaled up, and the more you can do that, the cheaper the product is, and more people can ultimately have access to it.”

Instrumental in setting up the School of Pharmacy’s Medicinal Chemistry Center, which has led to collaborations throughout the university, particularly with the Carbone Cancer Center, Hsung serves on the advisory board.

“The Medicinal Chemistry Center allows synthesis of lead compounds and functional modifications of that, which can hopefully become better drug candidates,” says Burnette. “It’s the starting point for a very elaborate process in which drugs are discovered and their mechanism of action is determined, followed by formulation.

“Richard is hugely valuable to our faculty because of his stature, and this Vilas award further enhances that,” says Burnette. “It helps us recruit top graduate students and top faculty. Arguably, one could say that because he’s so well known, it makes our whole PharmSci Division well known, at least in the chemistry world.”

Hsung says supporting junior colleagues is important to him and benefits everyone.

“This place already rocked and has a long-standing tradition of excellence in pharmaceutical sciences, but I was here to do what I could to help to improve it even further,” Hsung says. “My mission became supporting the young faculty members we hired. When the whole place is elevated, everyone is elevated, so you must do everything you can to ensure that they become successful.”

Burnette says that two of the School of Pharmacy’s most successful tenure-track faculty, one of whom is now a full professor and the second of whom is close to becoming a full professor, have benefitted from Hsung’s guidance in submitting grants and publications.

“His stature and experience helps him guide younger investigators to become successful,” says Burnette. “This award captures that—because it’s not only his publications, it’s also his mentoring skills. These are the things that make him stand out.”

Hsung refuses to take any credit for his role in other faculty members’ successes, however.

“I cannot take a shred of credit for their success—their innovative ideas, how they creatively pursued those new ideas, how they worked around the clock to become successful—that was all them,” Hsung says. “The best thing I did was to not stand in their way.”

“It doesn’t matter how smart an advisor is or how great their ideas are, we are only as good as our students,” says Hsung. “Good, smart, hardworking, intelligent, creative students bring different values and packages to the table for the success of a research group.”

Burnette says he values Hsung’s ability to discern who would be a good graduate student, particularly among foreign graduate students. Hsung explains that he learned how different countries assess students as a result of extensive time spent overseas.

“I had the fortune of traveling a lot in Europe and Asia for visiting professorships, talks, and conferences, so I got to know many people, as well as different countries’ systems, in terms of how they evaluate universities and students,” says Hsung. “For example, in China, looking at students’ rankings within their graduating class and the rankings of their schools is a more accurate way to evaluate them than, say, GRE scores or ESL exams like TOEFL.”

Hsung says he’s proud of the high quality of graduate students at the School of Pharmacy.

“Our graduate applicant pool is more sophisticated now, in number and quality of both American and international students,” Hsung says. “I’ve been fortunate enough to have been part of the process that brought in a lot of these very bright young people, in addition to the people who were already here.”

Hsung’s curiosity and diverse interests have taken him to many different areas of science. While his research group has been as large as 32 members, he is focusing on new challenges. Hsung is currently working with just one student on new projects in molecular cell biology, inspired by his wife, a molecular cell biologist.

The Vilas professorship provides $75,000 of flexible funding over five years, so Hsung will be able to use it toward his new research projects.

“It’s exciting to feel like a junior faculty member again,” says Hsung. “Once again, I’m pounding nails and getting stuff started, in a very different field that’s not my training.”

Previous School of Pharmacy honorees of the Vilas Professorship include Professors Lingjun Li and Jeff Johnson in the Pharmaceutical Sciences Division.