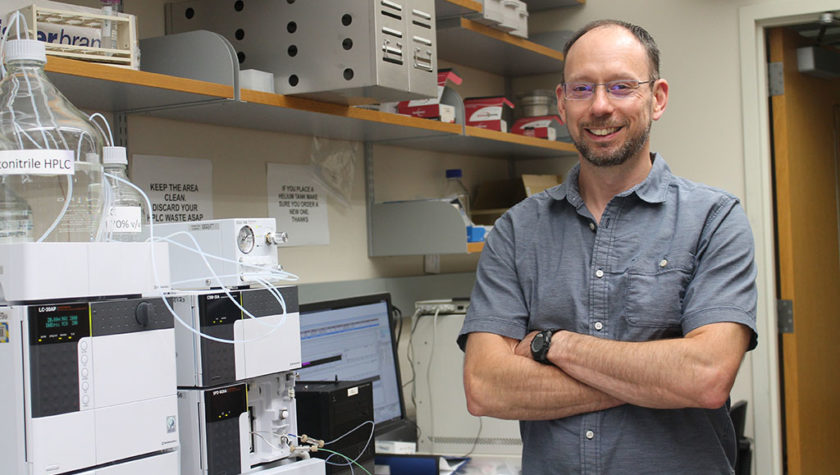 Professor Tim Bugni in his lab in the School of Pharmacy's Pharmaceutical Sciences Division.

By combing the ocean for antimicrobials, scientists at the University of Wisconsin–Madison have discovered a new antifungal compound that efficiently targets multi-drug-resistant strains of deadly fungi without toxic side effects in mice.

The new molecule was discovered in the microbiome of a sea squirt from the Florida Keys as part of an effort to identify novel antimicrobials from understudied ecosystems. Scientists named the antifungal turbinmicin, after the sea squirt from which it was isolated, Ecteinascidia turbinate.

Disease-causing fungi continue to evolve resistance to the small number of drugs available to thwart them. As a result, more people are dying from previously treatable diseases, such as candidiasis or aspergillosis, which are caused by common fungi that sometimes turn virulent. Identifying compounds like turbinmicin is key to developing new and effective drugs. However, while turbinmicin is a promising drug candidate, additional study of the molecule and extensive preclinical research must be performed before a new drug can become available. 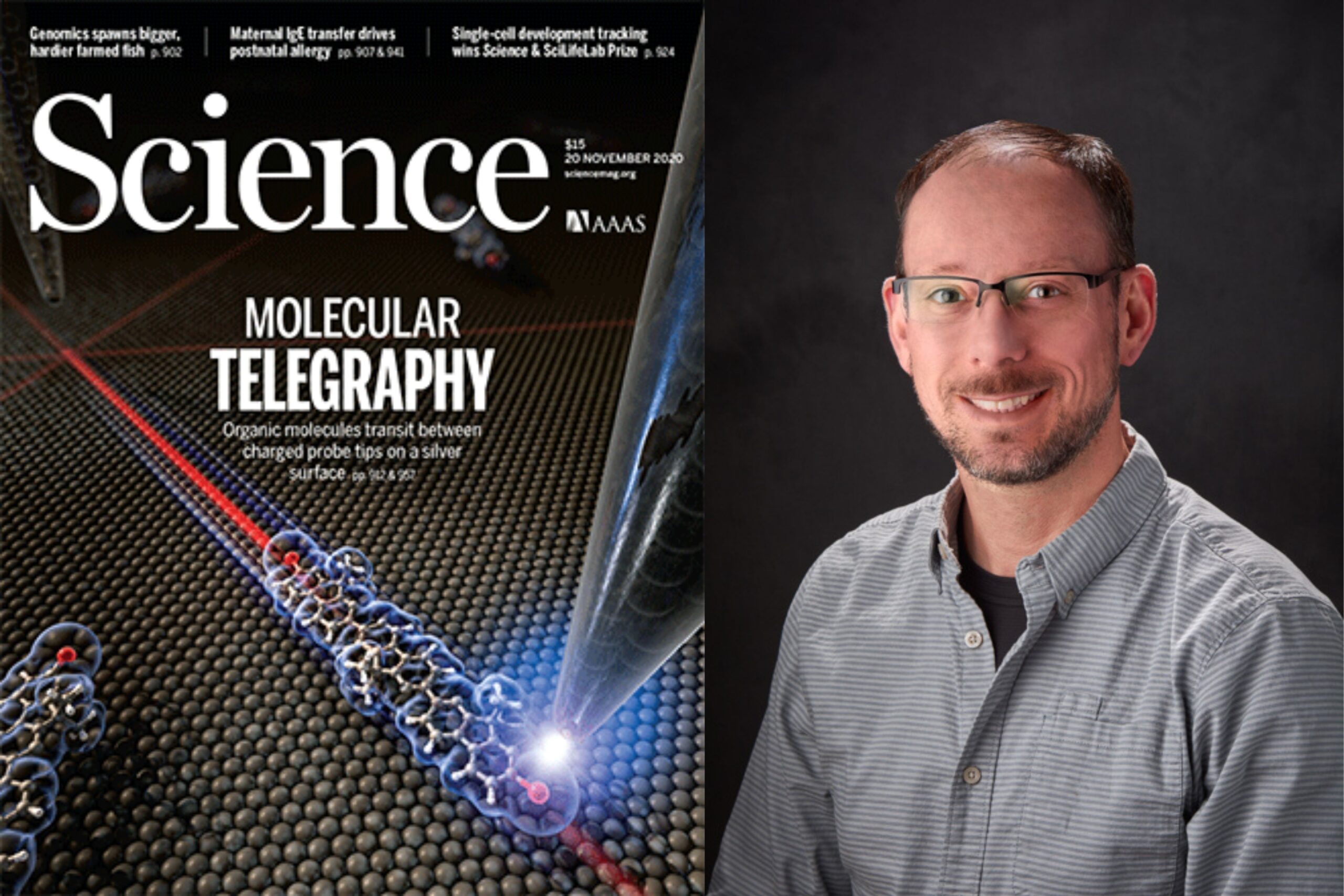 A collaboration of chemists, biologists, and physicians from UW–Madison published their findings Nov. 19 in the journal Science. The discovery of turbinmicin is the most tangible output yet of the group’s five-year, $30 million grant from the National Institutes of Health to glean useful new antimicrobial drugs from bacteria living in overlooked environments.

The majority of existing antimicrobials were isolated from soil-dwelling bacteria. As scientists continued probing these bacteria for new drugs, they often turned up the same molecules over and over again.

“Bacteria in particular are rich sources of molecules. But a lot of the terrestrial ecosystems have been pretty heavily mined for drug discovery,” says Tim Bugni, a professor in the UW–Madison School of Pharmacy who led the turbinmicin project. “There’s immense bacterial diversity in the marine environment and it’s barely been investigated at all.”

To correct for that oversight, Bugni partnered with UW School of Medicine and Public Health infectious disease professor David Andes, UW–Madison bacteriology professor Cameron Currie, and their colleagues to search neglected ecosystems. Specifically, they sought to discover novel bacteria from marine animals and then screen them for new kinds of antimicrobial compounds.

To identify turbinmicin, the research team began by collecting ocean-dwelling invertebrates from the Florida Keys between 2012 and 2016. From these animals, they identified and grew nearly 1,500 strains of actinobacteria, the same group of bacteria that has produced many clinical antibiotics. Using a screening method, they prioritized 174 strains to test against drug-resistant Candida, an increasingly prominent and dangerous disease-causing fungus. Turbinmicin stood out for its effectiveness.

“Candida auris in particular is pretty nasty,” says Bugni. Nearly half of patients with systemic Candida infection die. “The Candida auris strain we targeted in this paper is resistant to all three classes” of existing antifungals.

The researchers tested purified turbinmicin against a slate of 39 fungi isolated from patients. These strains both represented diverse species and encompassed all the known ways that fungi have evolved resistance to existing drugs. In lab experiments, turbinmicin halted or killed nearly all fungal strains at low concentrations, indicating a potent effect.

“Now we have the tools to sort through candidates, find promising strains and produce molecules to do animal studies.”
—Tim Bugni

Similar experiments in mice infected with drug-resistant strains of Candida auris and Aspergillus fumigatus also demonstrated turbinmicin’s ability to attack resistant fungi. Because fungi and animals are closely related, and thus share similar cellular machinery, antifungals can prove toxic to animals as well. Yet, turbinmicin did not show toxic side effects in mice, even at concentrations 1000 times higher than the minimum dose. The effective dose would work out to tens of milligrams for an average-weight adult, less than for many other antibiotics.

Based on experiments in yeast led by SMPH biomolecular chemistry professor Anjon Audhya, turbinmicin appears to target the cellular packaging and organizational system of fungi. Turbinmicin blocks the action of the protein Sec14p, with the end result that yeast like Candida cannot bud to reproduce. Other kinds of fungi, when exposed to turbinmicin, may have a difficult time shuttling cellular contents around to grow. 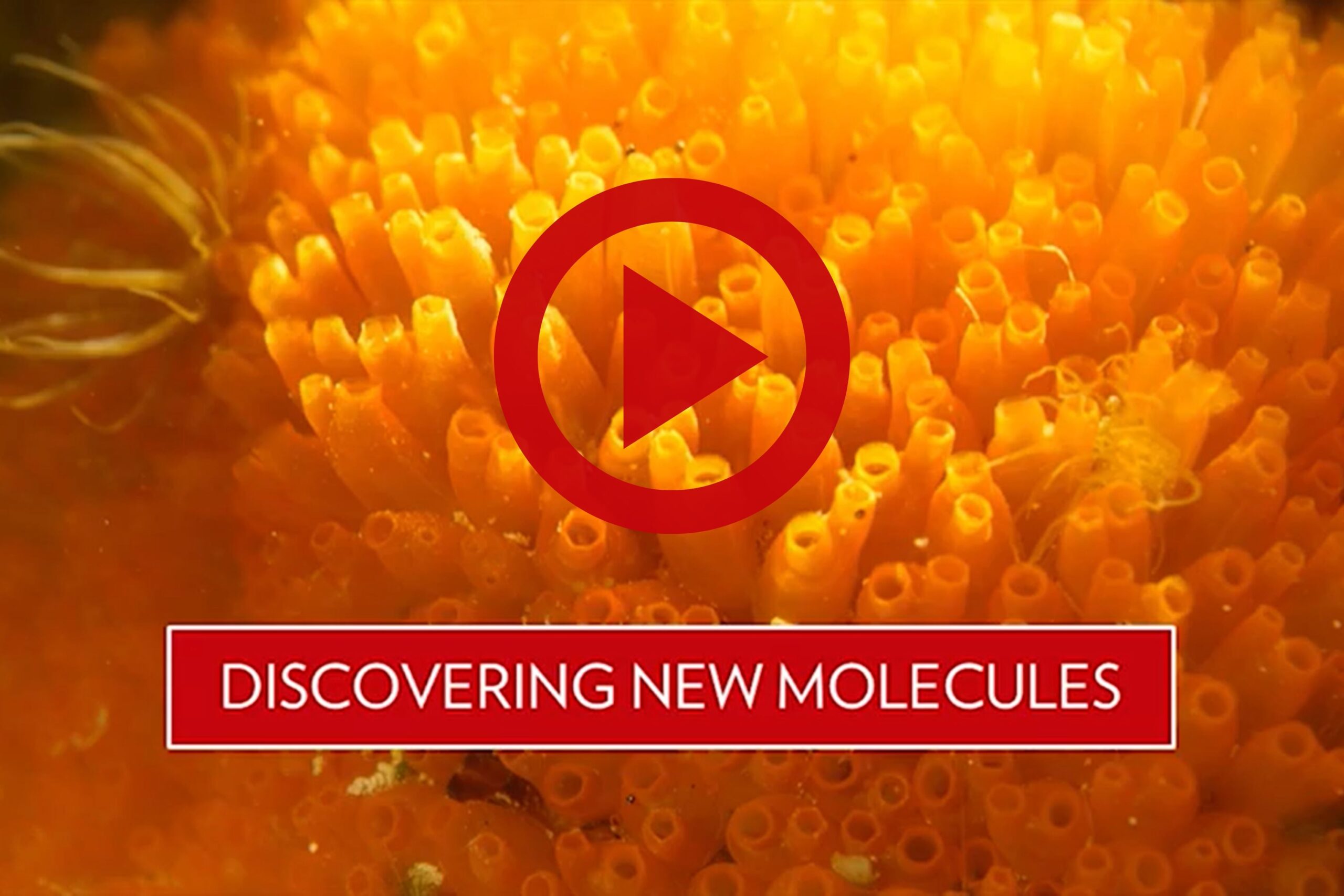 The researchers have submitted a patent for turbinmicin and have now turned their attention to improving the molecule by making small alterations to its structure that could increase its effectiveness as a drug.

The discovery of turbinmicin also serves as a proof-of-concept for the collaboration’s efforts to explore new ecosystems and screen thousands of candidates to identify new, effective antimicrobial candidates.

“Now we have the tools to sort through candidates, find promising strains and produce molecules to do animal studies,” says Bugni. “That’s the key for targeting multi-drug resistance: you need unique molecules.”

Watch this video about Dr. Bugni and his research in natural products drug discovery.

Learn more about the Bugni Lab. 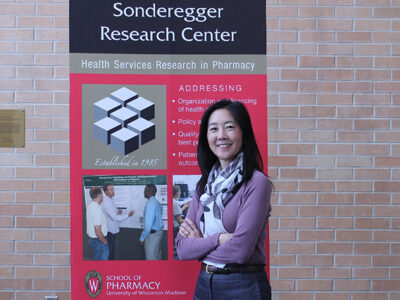 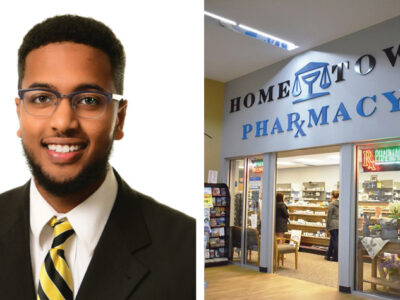