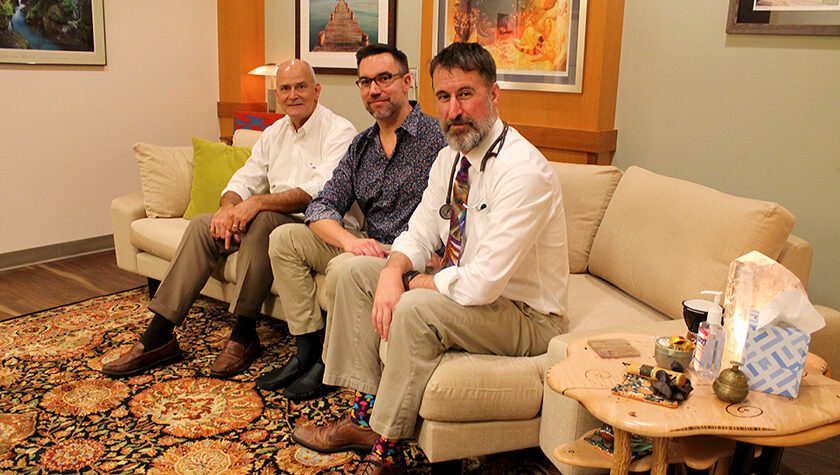 Housed at the School of Pharmacy, the Center leverages clinical and transdisciplinary expertise in emerging field of psychedelic-assisted therapy

In 2014, the University of Wisconsin–Madison campus became the site of the first Phase 1 clinical trial for psilocybin. Since that study, which was led by UW–Madison School of Pharmacy Professor Paul Hutson, the campus has steadily become a powerhouse of psychedelic research aimed at treatments for mental health conditions ranging from severe post-traumatic stress disorder (PTSD) to opioid use disorder.

“We are one of a handful of academic sites in the U.S. that have a history of doing research with psychedelics,” says Hutson. “And we’re one of even fewer to do it at a quality and caliber high enough to be acceptable by the U.S. Food and Drug Administration for a New Drug Application.”

“From cannabis to psilocybin (magic mushrooms) and MDMA (ecstasy), psychoactive agents are the new frontier for potential new therapies and medications.”
—Paul Hutson

To provide infrastructure and other resources to stay on the cutting edge of this emerging field, the School of Pharmacy is launching the UW Transdisciplinary Center for Research in Psychoactive Substances. Although housed within the School, the new center reaches across campus to accelerate scholarly research into the science, history, and cultural impact of psychedelic agents, in addition to the potential therapeutic use of psychoactive substances.

Nationally and internationally, we’re seeing a growing a recognition of the possible benefits of psychedelics, says Hutson.

“Early studies have showed a dramatic impact on depression from one dose of psilocybin in a structured research setting. Similarly, when combined with psychotherapy for the treatment of PTSD we’re seeing dramatic benefits of the inclusion of MDMA, with a tripling of the response rate or remission rate for PTSD,” he says. Importantly, the MDMA was not used alone, but as part of active, professional psychotherapy.

Some of those studies were done right here at UW–Madison. Earlier this year, School of Medicine and Public Health faculty Randall Brown and Christopher Nicholas co-authored a paper published in Nature reporting that MDMA helped 67 percent of study participants drop below the diagnostic criteria for PTSD and 33 percent meet the criteria for remission.

“There appears to be real promise in the treatment of a number of often refractory conditions related to addiction and mental health,” says Brown. “We have a lot to learn yet about possibilities and about optimal implementation and dissemination.”

Four clinical trials in phases 1 to 3 are currently underway at UW–Madison to prepare for submitting applications for new drugs to the Food and Drug Administration, such as studying the efficacy of psilocybin as treatment for major depression and opioid addiction.

Cody Wenthur, assistant professor in both the School of Pharmacy’s Pharmaceutical Sciences and Pharmacy Practice Division and a member of the Center’s executive committee, is also seeking ways to make ketamine a better therapeutic for depression by blocking some of the drug’s negative impacts. He is collaborating with Hutson and Nicholas to find out if it’s possible to observe therapeutic effects of psilocybin in the absence of memory of the psychedelic experience.

In addition to his findings about MDMA and PTSD, Brown is also working toward the therapeutic use of psilocybin for opioid use disorder and major depressive disorder. Nicholas is applying psychedelic therapy to methamphetamine use disorder.

“I anticipate FDA approval of psilocybin and MDMA within the next five years, and the UW Transdisciplinary Center for Research in Psychoactive Substances will help meet the need for more research into these applications, as well as others, that could dramatically improve patients’ lives,” says Hutson.

As the clinical evidence mounts for promising potential therapeutics, the new UW Transdisciplinary Center for Psychoactive Substances Research is one of less than 10 research facilities like it worldwide.

“We’ve been at the forefront of this work for about 10 years now, so we bring more experience than most institutions,” says Brown.

Even among the small cohort of institutions engaged in this area, the broad expertise at UW–Madison stands out. At the School of Pharmacy, in addition to Hutson and Wenthur, center members include Assistant Professor Natalie Schmitz, whose research centers on cannabinoids use for cancer supportive care, and Associate Professor Lucas Richert, George Urdang Chair in the History of Pharmacy and historical director of the American Institute of the History of Pharmacy.

“We’ve been at the forefront of this work for about 10 years now, so we bring more experience than most institutions.”
—Randall Brown

Across the UW–Madison campus, there are eight more units with faculty and staff who are currently engaging in research related to psychedelics or psychoactive agents, ranging from the School of Human Ecology to the Latin American, Caribbean, and Iberian Studies program, and from the Department of Asian Languages and Cultures to the Department of Dairy Sciences.

“As someone whose work spans from organic synthesis to ethical implementation research, the thing that excites me most about this Center is that it’s not purely clinically focused,” says Wenthur. “The University of Wisconsin is the perfect place to do this because we have a large campus that provides local access to world-renowned expertise across nearly the entire breadth of scholarly disciplines.”

Although numerous researchers around campus are already engaging in this work, the Center will help provide infrastructure to help them expand their studies and even attract new researchers.

“Similar to other types of chemical or biological research that need specific, expensive instrumentation, doing work with psychedelic-assisted psychotherapy requires dedicated infrastructure — trained guides, a study space, proper DEA licensing — all of the things that surround the study design itself,” says Wenthur.

Center members will have access to the School of Pharmacy’s current study space, which is one of few facilities like it in the world. Set up like a living room, it’s equipped with the comforts of home alongside monitoring devices to ensure participant safety and study replicability.

Studies involving psychoactive agents require keeping a close eye on participants, both their physical and mental state. For each study, one or two trained guides or therapists protect the space and take care of the patient throughout their dosing session. The Center hopes to have one trained psychotherapist on staff to serve as a treatment guide and will also offer trainings to members of research groups.

“By having these resources available to other investigators, we can potentially increase the number of available grants that are awarded to UW,” says Wenthur.

Another benefit of the Center is in the paperwork: Hutson is one of few researchers who hold the necessary investigational new drug exemption and Schedule 1 license for clinical projects that involve drugs like marijuana, psilocybin, and LSD. By collaborating with the Center, researchers will be able to leverage Hutson’s proven expertise and licensing.

Over the past two decades, just 2.5 percent of psychedelic-assisted psychotherapy study participants were African American, 2.1 percent were Latinx, and 4.6 percent were Indigenous. Without adequate racial and ethnic representation in clinical trials for new therapeutics, study findings may only be applicable to a narrow set of individuals, exacerbating a gap in mental health treatments. Finding ways to increase participation by BIPOC community members is central to the Center’s mission.

“The Wisconsin Idea is really forefront, and that’s one of the reasons why I want to get broad representation on our executive and advisory committees, not only with Black and Hispanic populations but also with First Nations and in particular the tribes of the Northwoods,” says Hutson.

Indigenous cultures have long used psychoactive compounds like peyote and ayahuasca for healing and ceremony, and including these groups in clinical trials and strategy can yield new insights. Modern clinical trials have even borrowed best practices from Indigenous groups, such as the presence of a trained guide to stay with the patient throughout treatment. 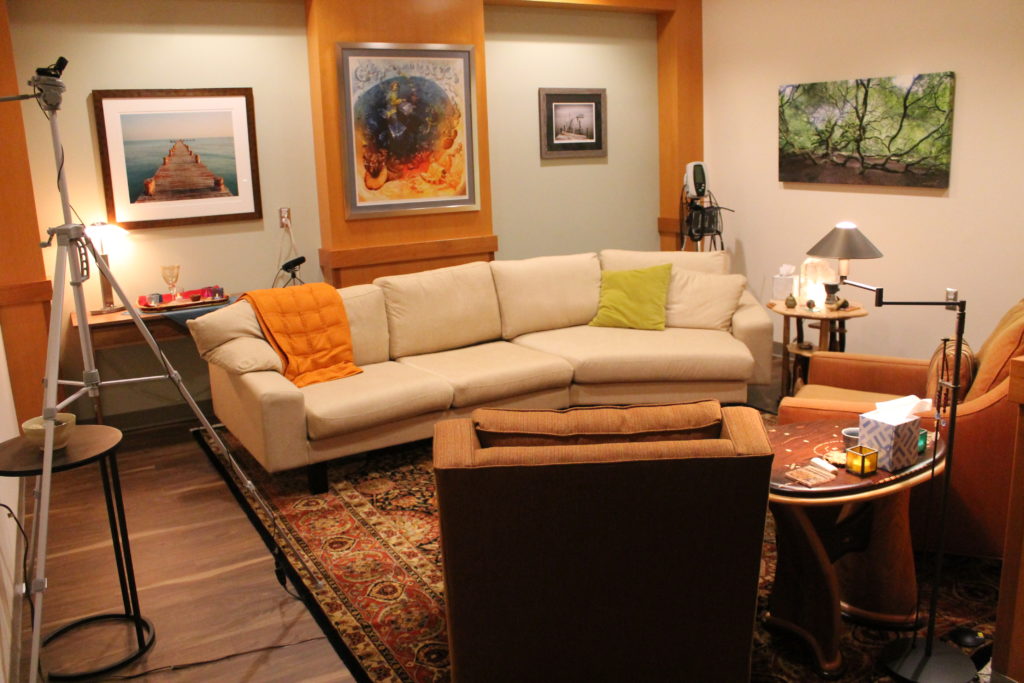 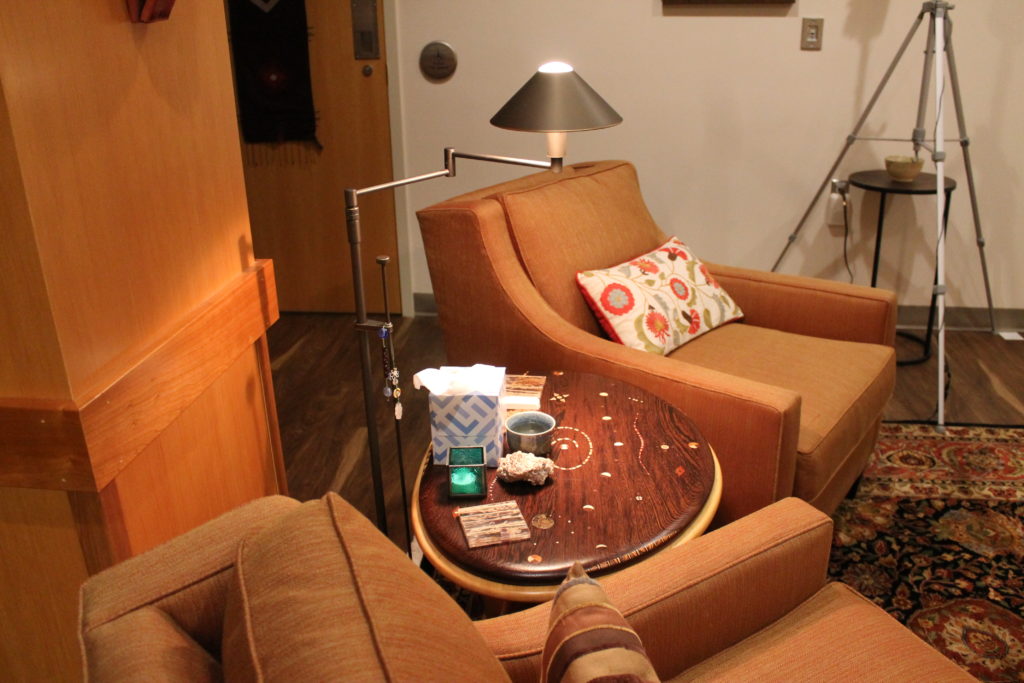 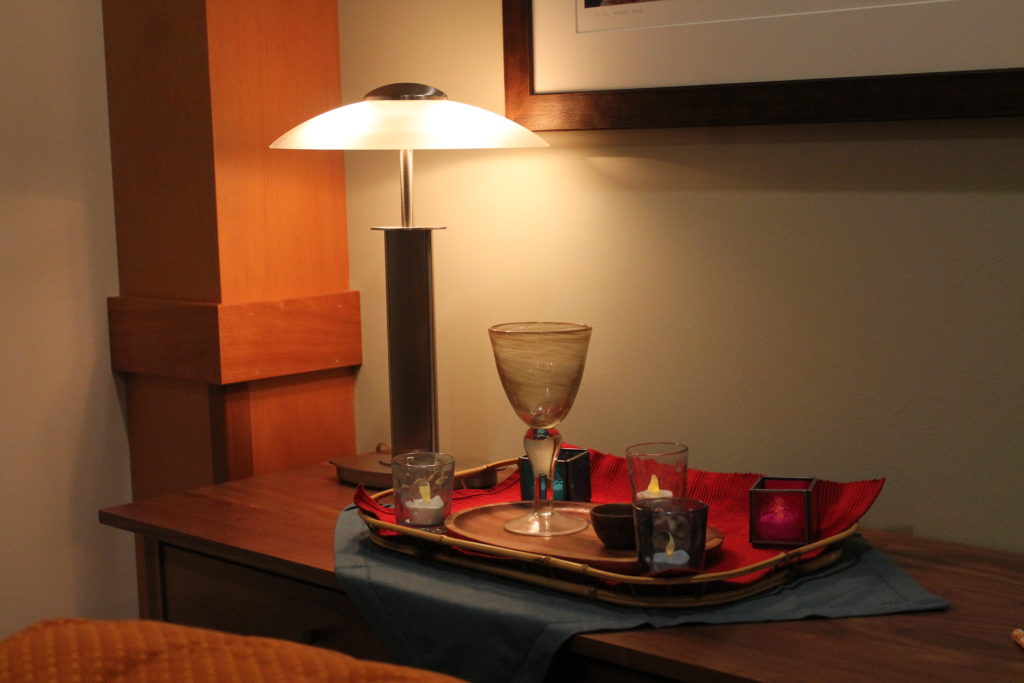 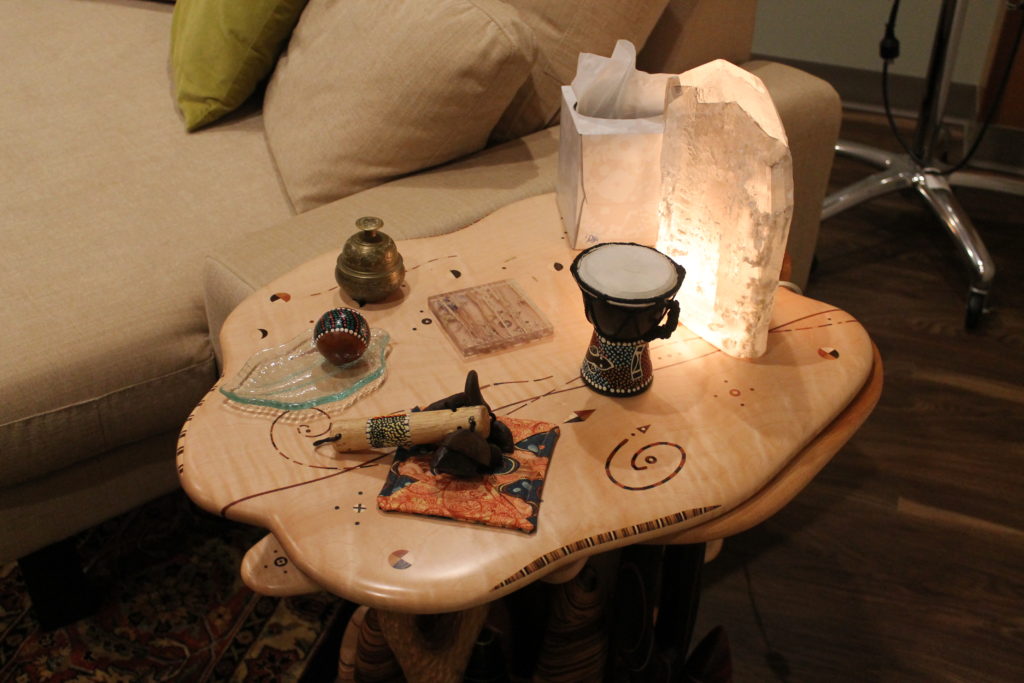 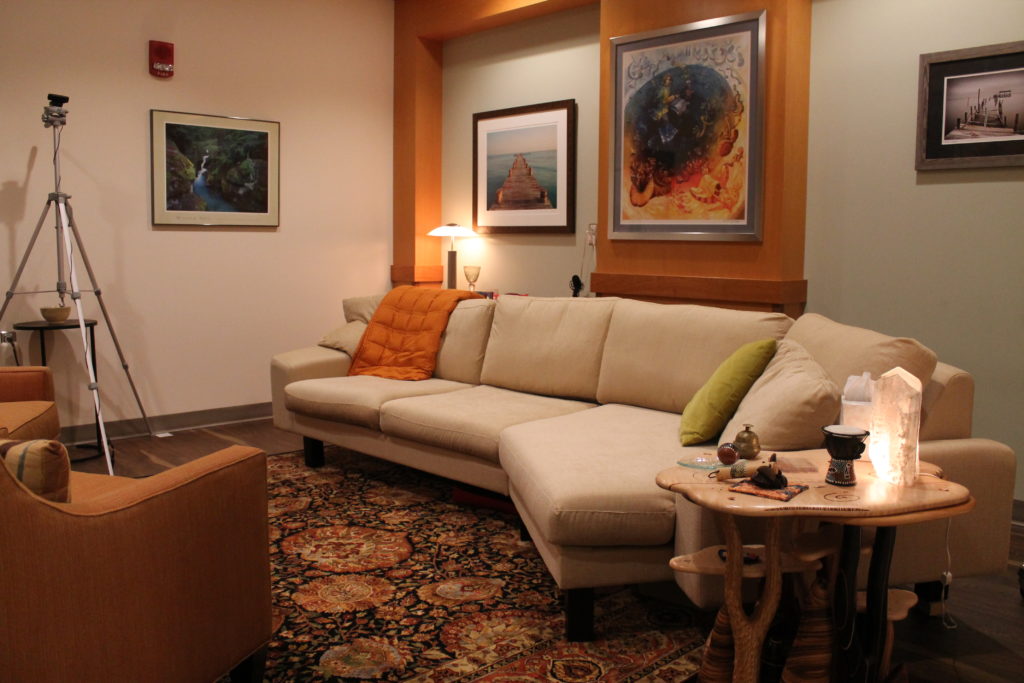 Wenthur recently launched a study in collaboration with center members that’s geared toward understanding the basis for asymmetric participation and increasing representation by measuring the effects of increasing participant engagement in personalizing the study space and incorporating cultural competency training on study recruitment and results.

“Closing health equity gaps must be a priority if we want to effectively address the heavy burden of mental health disorders present in America right now,” says Wenthur.

To help overcome barriers to recruitment and participation, the Center will seek to add more study locations — in addition to the School’s facility — that will be easier for people to access.

“It’s hard for people in some socioeconomic situations to access these trials,” says Hutson, citing work schedules, childcare, and transportation as hurdles to the numerous appointments for preparatory sessions, treatments, and follow-up visits.

“More accessible study sites and more trained guides will help accelerate and augment this research on the UW–Madison campus, because those are the pinch points that are currently keeping us from moving forward,” says Hutson.

Paving the way for future breakthroughs

“The Center dovetails very nicely with our recently launched master’s program, particularly because the education needs to be supported by real-world expertise,” says Wenthur, who is the director of the PPI program. “The Center and the master’s program work synergistically to provide an integrated vision for improving mental health.”

Hutson aims to position the UW–Madison campus as a training site, both for clinical facilitators and for students in the School’s PPI and capstone programs, which will continue to fuel future research. But the educational goals don’t end there. He also prioritizes educating the community about the work being done through the Center to raise the profile of this cutting-edge work and assuage concerns about its legitimacy.

“The University of Wisconsin is the perfect place to do this because we have a large campus that provides local access to world-renowned expertise across nearly the entire breadth of scholarly disciplines.”
—Cody Wenthur

“I might hope that the establishment of the center will enhance the credibility and visibility of this important scientific area,” says Brown, “As I say, there is still much work to be done, and it will require funding and infrastructure to make it happen in a scientifically rigorous way.”

Although the National Institutes of Health awarded its first grant to medicinal psychedelic research just earlier this year, most studies into the therapeutic use of psychoactive substances rely on private donors or non-profit organizations, such as the Madison-based Usona Institute. To offer more researchers an opportunity to pursue and expand their projects, the Center has created the Wisconsin Psychedelic Research and Education Fund, open to donors who want to maximize the impact of emerging area of medicine.

“Having this center gives us a home to engage in the future of scholarship, breaking down silos between traditional disciplines and asking tough questions at the interface of science, humanities, the arts, and the human condition,” says Wenthur.

Learn more about the Wisconsin Psychedelic Research and Education Fund. 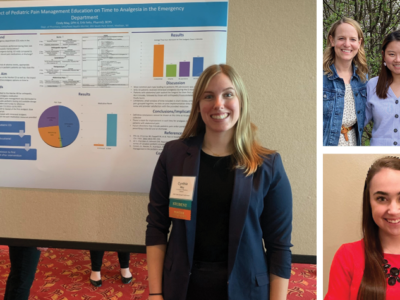 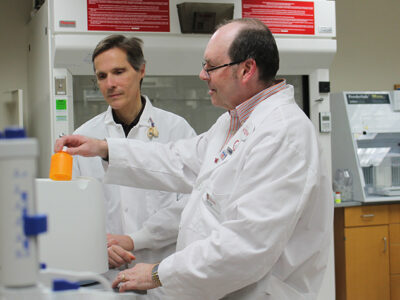