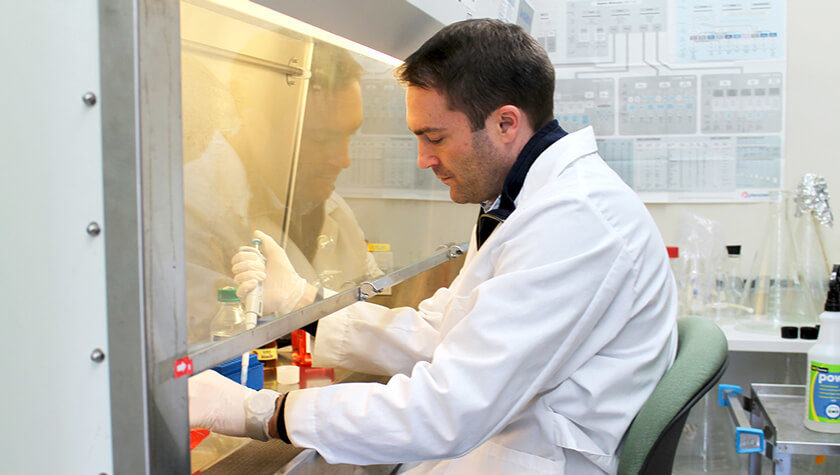 Assistant Professor Warren Rose, working in his lab at the School of Pharmacy.

U.S. hospitals wait over a year on average to begin prescribing newly developed antibiotics, a delay that might threaten the supply or discourage future development of needed drugs.

A survey of how 132 hospitals prescribed six new antibiotics from 2014 to 2018 found that the average time to prescribe any one of the new drugs was 398 days. Teaching and research hospitals and large hospitals tended to prescribe the drugs more quickly than smaller, non-academic hospitals.

That gap period delays the payback of research and development costs in the crucial months following federal approval of a new drug. Those challenges could reduce the likelihood that companies develop new antibiotics, which are essential for treating pathogens that develop resistance to existing antimicrobials.

Warren Rose, associate professor in the University of Wisconsin–Madison School of Pharmacy’s Pharmacy Practice Division, who led the recent study, says this delay shows the need for market-boosting incentives to buoy new antibiotics during this sensitive period to ensure a robust supply of fresh antibiotics in the coming years and decades.

He points to the pharmaceutical company Achaogen, which filed for bankruptcy earlier this year after its first drug, an antibiotic, failed to gain a market foothold.

“If companies fail, then even if you call for drugs, they won’t make them,” says Rose. “As clinicians, we are hypocritical, because we call for drugs and then don’t use them.”

Rose conducted the study with Lucas Schulz (PharmD ’08), the infectious diseases coordinator in the Department of Pharmacy at UW Health, Seok Yeong Kim, a student at the School of Pharmacy, and Alyssa Hartsell from the health care consulting company Vizient. The team published its findings June 22 in the journal Diagnostic Microbiology and Infectious Disease.

“As clinicians, we are hypocritical, because we call for drugs and then don’t use them.” –Warren Rose

In response to the growing problem of antibiotic resistance, which affects millions of people in the U.S. each year, public and private organizations have provided funding and support to boost the development of new antibiotics. That support has worked — 12 new antibiotics have received approval by the Food and Drug Administration since 2010, reversing decades of declining development.

Those drugs include several Qualified Infectious Disease Products, an FDA label for antibiotics that are eligible for extended exclusive sale protections and rapid approval as incentives for development. Rose and his team tracked the prescription of six QIDPs over four years using a Vizient database.

While the average time to use one of the new drugs was longer than a year, it varied widely from less than two weeks to more than four years. Hospitals with more complex patient needs, which tended to be larger hospitals and those associated with universities, prescribed the new drugs more quickly.

Prescribing time also varied by region. The South prescribed all six drugs within two years on average, while the Northeast region took more than three and a half years to meet the same mark.

It’s not entirely clear what drives this delay. These new drugs are much more expensive than legacy antibiotics — up to $1,000 a day versus pennies for some older drugs — which may account for some of the reluctance to begin prescribing them.

More importantly, antibiotics work best when they are only used for the right patient at the right time, and there may be barriers to including the new drugs in these protocols. Many of the recently developed antibiotics target a wide range of bacteria, which means they do not meet antibiotic stewardship guidelines that recommend targeting pathogens with narrowly active antimicrobials.

There are also few tests available for helping doctors determine whether a patient is a good candidate for these new drugs, which means they may only be prescribed after other antibiotics have failed to cure an infection. In all, these new antibiotics appear to function as a drug of last resort, delaying their use.

Rose says current incentives for companies to produce new antibiotics end before the drugs are approved and go on sale, leaving companies in the lurch if uptake is slow. “Those incentives might not be enough,” says Rose. “We have to think about things differently.”

Programs that push drugs to market could be combined with incentives that pull new antibiotics forward once they receive FDA approval, Rose says. Government stockpiling of drugs or a cash reward for meeting that milestone might help companies bridge the year-plus gap to a stable market.

A recently proposed bipartisan bill in Congress, the DISARM Act, aims to institute some of these pull incentives. These sorts of programs could help ensure a steady stream of new antibiotics by providing more security after the drugs are approved.

“I don’t know if this study has all the answers, but it starts the conversation,” says Rose.

Read about Rose’s recent R01 grant from the National Institutes of Health to unlock old antibiotics in MRSA treatment.