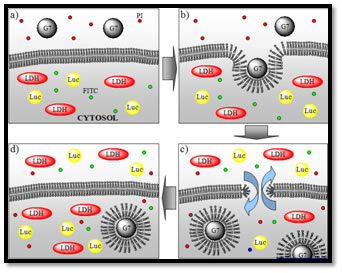 In order to develop effective delivery systems, it is essential to develop a more fundamental understanding of nanomaterial-cell interactions. We have found that positively-charged polyamidoamine (PAMAM) dendrimers and other polycationic polymers induce the formation of transient pores in cellular membranes. This phenomenon plays a key role in cellular uptake of these materials, competing with endocytic mechanisms of uptake. 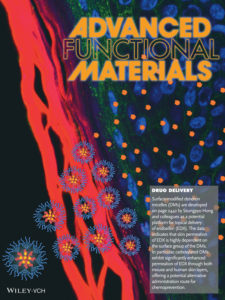 Using our basic understanding of nano-bio interactions we have prepared engineered polymeric nanoparticles combining advantageous properties of multiple systems. Micelles self-assembled from linear and dendritic amiphilic copolymers represent a promising class of nanocarriers. We have developed dendron-based micelles consisting of a hydrophobic, biodegradable poly(ε-caprolactone) core, a hyperbranched generation 3 polyester dendrimer, and a poly(ethylene glycol) outer layer. Owing to the hyperbranched dendron structure, our micelles demonstrated enhanced thermodynamic stability, a high degree of surface PEG coverage, and are able to maintain ligand-mediated cell targeting in the presence of serum proteins. The dendron micelles further allow for control over the surface distribution of targeting ligands. 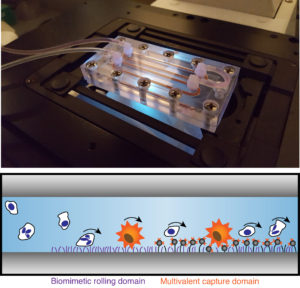 Metastatic cancer colonies are initiated with an adhesion mechanism hijacked from the inflammation response. The first step in this process involves transient, reversible, adhesive interactions between selectin molecules expressed on the endothelial venules and glycoprotein receptors on the leukocyte/invasive cancer cell, resulting in cell rolling. By exploiting this natural process, circulating tumor cells (CTCs) may be selectively captured on devices containing selectins and other cancer cell specific ligands. To translate this technique to realistic devices, capturing surfaces need to be non-fouling, stable, and controllable with minimum batch-by-batch variations, which are major drawbacks of current immobilization methods of the ligands, i.e. physisorption. Covalent immobilization of cell-specific ligands using non-toxic chemical reactions can enhance these properties as compared to physisorbed surfaces both in model and in vitro studies. The results suggest that cancer cell specific capturing devices based on cell rolling can be achieved if the ligands are covalently immobilized in a controlled way and present high specificity against their targets. An optimized, polymer-based nanovector is employed for this application in order to enhance the specific capturing capacity of the devices via multivalent effects.