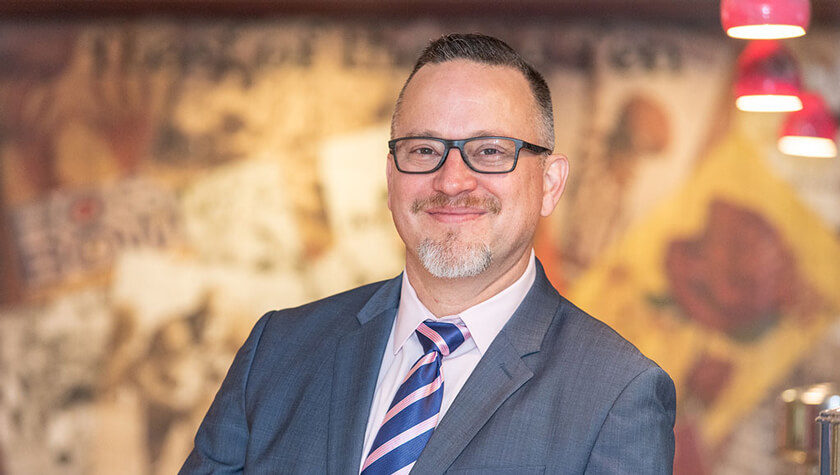 If you cut yourself shaving or fall down and scrape your knee, you form a scab that later falls off, revealing fresh skin without much scarring.

“The liver has its own version of that,” explains Gavin Arteel (BS ’93). “It’s a similar process to skin healing, but it’s not well understood.”

Arteel, a graduate of the University of Wisconsin–Madison School of Pharmacy’s Pharmacology and Toxicology program, has devoted his research career to understanding how the liver’s matrix drives injury and recovery, especially as it pertains to factors like obesity and alcohol use.

“As the main detoxifying organ in the body, the liver has a high likelihood of toxic injury, and it has several lines of defense that protect (or rebuild) from this injury. It’s only when these defense systems break down, or are overwhelmed, that you see significant liver injury,” he says. “This process has always fascinated me, and my work to this day focuses on trying to better understand the underlying mechanisms that lead to the chronicity of liver disease.”

His research in this area has earned him several commendations, including the George L. O’Donaghue Memorial Predoctoral Fellowship from the American Liver Foundation, 2004 Young Investigator Award from the Research Society on Alcoholism, and induction as a fellow of the American Association for the Study of Liver Diseases in 2015. Arteel also sits on the editorial boards of several high-impact scientific journals, including Hepatology, Alcohol, and the World Journal of Gastroenterology.

“As long as I continue to have fun doing research, that’s what I’ll be doing.” –Gavin Arteel

Most recently, he’s also earned an accolade a bit closer to home: Arteel is the School of Pharmacy’s 2019 PharmTox Alumnus of the Year.

Arteel accepted the award recognizing his vast contributions to the field of pharmacology and toxicology at the 2019 Pharmacology and Toxicology Graduation Breakfast, where he had some advice for the graduating class:

“When you find your passion, stick to the path,” he says. “Make choices that don’t limit your future options, and don’t second-guess yourself. As long as I continue to have fun doing research, that’s what I’ll be doing.”

Getting a flavor for PharmTox

Growing up in Manitowoc, Wis., Arteel loved math and science and knew wanted to pursue a STEM education in college, and an advanced degree program after that. As a high school student, he received a brochure from the UW–Madison School of Pharmacy’s Pharmacology and Toxicology program and was intrigued.

“It seemed like a perfect fit,” he says. “The major would meet the prerequisites for medical school, veterinary school, or graduate school, which were still all on the table for me.”

After taking prerequisite courses his first two years at UW–Madison, Arteel applied to the PharmTox program and was admitted, joining 15 other students in the major.

“We took pharmacotherapeutics with the more than 400 students in the PharmD program, and took specialty PharmTox courses on the pharmacology side and graduate-level toxicology courses,” he says.

Research is a huge component of the PharmTox curriculum, and Arteel found himself taking to it like a fish to water. Rick Lindroth, professor in the UW–Madison Department of Entomology, lectured in one of Arteel’s core biology courses and invited students to contact him afterward if they were interested in conducting ecotoxicology research in his lab — and Arteel jumped at the opportunity.

“He was a fantastic mentor and did a lot to shape my enthusiasm for science,” says Arteel. “He gave me a project that led to me becoming the first author on an academic paper by the end of my sophomore year.”

As a PharmTox student, Arteel also received a highly selective Hilldale Undergraduate Research Fellowship from UW–Madison, as well as an award from the National Science Foundation’s Research Experiences for Undergraduates program.

“I liked the entomology work in Dr. Lindroth’s lab a lot, but as I got deeper into research, I began to lean more toward medical toxicology, and that’s what got me into my doctoral work, liver and alcohol research,” says Arteel. After graduating from the PharmTox program, he earned his PhD in toxicology from the University of North Carolina (UNC).

Considering that he had been taking graduate-level toxicology courses as an undergraduate at the School of Pharmacy, Arteel felt well prepared to take the next step in his educational career.

“The PharmTox program gave me the material I needed to move forward in toxicology,” he says. “Many of my graduate courses felt like a review of what I had already learned as an undergraduate, which gave me a leg up. It put me on the upward trajectory I’ve followed since.”

Arteel’s first lab rotation at UNC was with Ron Thurman, who ended up becoming his doctoral mentor and who focused on liver and alcohol research.

“I was drawn to it because it was biochemistry,” explains Arteel. “The liver is the perfect organ for biochemical research because of its detoxifying role.”

After spending years in academic research labs, Arteel realized he didn’t want to leave — he wanted to retain the flexibility to let his curiosity guide his research, while helping future researchers reach their goals. Even a well-paid stint reviewing records of toxicology studies for Novartis didn’t dissuade him from pursuing academia.

After earning his PhD at UNC in 1997, he was awarded an Alexander von Humbolt Postdoctoral Fellowship in 1998, to work with Helmut Sies at the Heinrich-Heine University in Duesseldorf, Germany. Afterward, he returned to UNC for further postdoctoral research and was later hired as a research professor. Then the University of Louisville came knocking.

“Louisville was in a strong building phase, and I liked the enthusiasm and energy around the university and program,” says Arteel. “I liked the department chair and wanted to go and learn from him.”

“The PharmTox program gave me the material I needed to move forward in toxicology.” –Gavin Arteel

Arteel was a professor at Louisville for 16 years, where he was named a Distinguished University Scholar in 2010 — one of the University of Louisville’s highest faculty honors — and became vice chair for research. Louisville is also where he met one of his most important collaborators: his wife, Juliane Beier, who is also a researcher focused on the impact of environmental toxins on liver disease.

“We loved the city and university,” he says. “They were very supportive of me and my career.”

A little over a year ago, Arteel and his wife moved their research group to the University of Pittsburgh School of Medicine to take advantage of the university’s Pittsburgh Liver Research Center.

“It’s a very collaborative translational research environment, with access to clinical samples and databases that are unique to the Pittsburgh-UPMC (University of Pittsburgh Medical Center) system,” Arteel explains. “For what I’m doing now, that is an absolute bonus.”

Arteel, now a professor and associate chief for basic science in the University of Pittsburgh’s Division of Gastroenterology, Hepatology and Nutrition and the Pilot and Feasibility Core director of the Pittsburgh Liver Research Center, is currently working on better ways to diagnose and treat alcoholic liver disease, which is hard to diagnose early in the disease progression, leading to decompensated liver failure.

Arteel and Beier brought one graduate student with them from Louisville and have added two undergraduate fellows, three postdoctoral researchers, and a lab manager to their research group.

“We’re looking at prognostic indicators to determine which patients need to be treated most aggressively, and we think we have a new diagnostic tool for that,” he says.

Arteel’s research group is also studying the extracellular matrix metabolism, which is the interstitial tissue between cells, to understand how the liver repairs itself. In the same project, Arteel is looking at alcohol-induced lung damage, which shares similar mechanisms and might be interdependent with liver damage. These insights can inform future therapies.

Alcohol consumption is a risk factor for acute lung injury (ALI) and acute respiratory distress syndrome (ARDS). Both events are serious clinical concerns, with very high mortality rates, he says. But at the moment, little is known about who will develop ALI/ARDS, or how to treat them.

“We’re investigating a potential axis between the liver and the lung, in which the liver injury is releasing factors that drive injury and inflammation in ALI/ARDS,” Arteel explains. “With better understanding of this interaction, we may be able to detect or target these factors in the clinics, thereby potentially saving lives.”

Learn more about the Pharmacology and Toxicology undergraduate program.