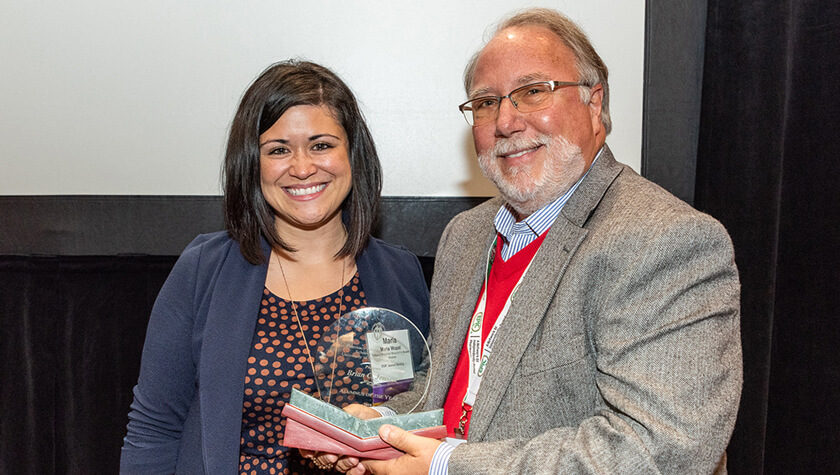 Brian Jensen (BS ’80) has been a pharmacist for 39 years, and for every one of those years, he has focused on making a positive difference in patients’ lives and driving the pharmacy profession forward in meaningful ways.

For his decades of commitment to innovation in pharmacy, the University of Wisconsin–Madison School of Pharmacy’s Pharmacy Alumni Association is honoring Jensen as the 2019 Alumnus of the Year.

“As I reflect on my journey as a pharmacist, I was fortunate to have had visionary mentors that provided early exposure to a philosophy of patient-centered collaborative care, helping me to see the pharmacy profession from a different perspective and to embrace change,” says Jensen. “Indeed, I stand on the shoulders of those who have come before me.”

Jensen, who founded and ran his own practice for years, has held a multitude of influential leadership positions — including serving on the School’s Board of Visitors and on the board of directors for both the Community Pharmacy Foundation and the Pharmacy Quality Alliance — through which he’s shaped the pharmacy landscape in Wisconsin and beyond.

For example, Jensen was key in ushering the Asheville Project into Wisconsin, and he started the state’s first pharmacy-based vaccination program and community pharmacy residency program.

Even after all these years, he’s still working on changing the future of pharmacy practice, through a new project called Flip the Pharmacy.

“I’ve never been more excited about a program and its impact,” says Jensen.

Jensen describes his pharmacy career as a journey with three phases: For the first 10 years, he developed his practice philosophy, centered on outcome-focused care. In the second phase, he explored and honed an innovative practice model to match his philosophy. In the current third phase, he is contributing to professional boards and projects that represent the future of pharmacy he wants to see.

“The theme of my career is to do what I can do, dream, and be at the cutting edge of pharmacy.” –Brian Jensen

He spent that first phase in a hospital pharmacy setting, where he worked in teams to provide clinical services using a decentralized pharmacy platform. “I began in acute care, supported a drug information center in a hospital, and moved into hospital administration,” Jensen explains. “I learned to work in teams and get things done as a group, and I understood that delivery of patient-centered, collaborative care requires a team.”

Jensen describes the work as rewarding and cutting-edge, and he began to explore ways he could do more to serve patients directly. At this time, pharmacists’ roles began to expand integrating principles of pharmaceutical care. Jensen seized on this evolution and the opportunity to bring his experience and insight into a new type of community pharmacy practice.

That’s when Jensen kicked off the second stage of his career, which lasted about 20 years. He founded Lakeshore Apothacare Inc. in Two Rivers in 1992, where he pioneered a sustainable, team-based practice model, in which pharmacists collaborated with providers and payers to meet patient needs. This is where Jensen established the first community pharmacy practice residency program in Wisconsin and the first pharmacy-based vaccination program.

“I had the chance to move into a community practice setting, and at that time, it was rare to have a team-based perspective, so I was able to take those skills and apply them in a community setting,” Jensen explains. “Over time, I worked to take what I did in my practice and expand it around the state.”

Jensen helped develop the American Pharmacists Association (APhA) Principles of Practice for Pharmaceutical Care in the early 1990s and partnered with the Wisconsin Pharmacists Association (now Pharmacy Society of Wisconsin, or PSW) in developing the Wisconsin Center for Pharmaceutical Care (WCPC) to train community pharmacists as leaders and change agents. Accelerating the change process, PSW and the UW–Madison School of Pharmacy developed and promoted community pharmacy practice residencies in Wisconsin.

As payers and providers realized they needed to shift focus away from component cost reduction strategies and onto outcomes, the Asheville Project, an innovative chronic disease model that was payer-driven and patient-centered, launched in Asheville, North Carolina, in 1997. The program provided education and personal oversight for city employees with chronic health problems such as diabetes, asthma, hypertension and high cholesterol and was recognized by APhA as a foundational model for future practice expansion.

Moving from the Asheville “test tube” to the “mini-plant” stage, Lakeshore Apothacare was one of the five original practice groups. Jensen was then part of the team that taught and replicated the Asheville model around the U.S.

“I learned that if you can identify shared goals and align incentives to achieve those goals, you can achieve positive outcomes,” says Jensen. “We baked this idea into the Asheville model, and that’s why it’s still considered the prototype for collaborative care programs. As you increase the quality of care, the cost of care goes down.”

Now in the third phase of his career, which he jokingly dubs “the board phase,” Jensen turned the practice keys over when he sold to his colleagues Marv (PharmD ’02) and Joylyn (PharmD ’04) Moore.

Jensen still works in the pharmacy one day a week, while serving on the board of the Community Pharmacy Foundation (CPF), the Pharmacy Quality Alliance (PQA), the PQA Executive Research Advisory Council, the Center for Pharmacy Practice Accreditation Standards Development Committee, and a number of civic groups. He has also provided pharmacy services to a medical mission clinic in Guatemala for the past 10 years.

“I continue to keep my pharmacy practice skills current while still seeing the patients I love to take care of at the pharmacy and have time to go to board meetings and work on other projects,” he says. “I am quite proud that the practice continues to thrive and is actively advancing patient care initiatives.”

Jensen emphasizes the importance of balance among work, family, and community. Married 42 years to his wife, Barb, the wisdom of making time to spend with family — parents, children, and his grandson, Beckett, a future Badger — is underscored.

Jensen, who was the first elected president of the Pharmacy Society of Wisconsin (PSW), expressed this commitment to patient care as a founding member and contributor to the Wisconsin Pharmacy Quality Collaborative (WPQC). His focus has now shifted to projects with PQA and CPF.

“CPF is an idea incubator that invests in models of practice, and PQA defines, measures, reports, and compares the quality of these practices,” explains Jensen, who has served on the CPF board of directors over 10 years and on the PQA board of directors for eight years. He is also on a newly formed Executive Research Advisory Council, which provides insight into research initiatives for PQA. “My current research interests include consumer-level comparative practice reporting and pharmacist attribution of care inside of collaborative teams.”

Both organizations aim to advance pharmacy by creating and supporting sustainable ways to optimize pharmacists’ clinical and patient-care abilities.

Flipping the future of pharmacy

CPF will oversee the funding, implementation, and measurement of the new Flip the Pharmacy initiative, a five-year, nationwide program intended to move community pharmacy practice and pharmacists’ roles beyond filling prescriptions to providing long-term patient-focused, outcomes-driven care. As a longtime member of both PQA and CPF’s boards of directors, Jensen has been closely involved in the development of Flip the Pharmacy’s processes and business models.

“With Flip the Pharmacy, we have resourced an infrastructure that is being built, so we can see it through and build it to be sustainable,” says Jensen. “There are teams in over 40 states. This is huge.”

“The theme of my career is to do what I can do, dream, and be at the cutting edge of pharmacy,” says Jensen. “That’s exactly what we’re doing with Flip the Pharmacy. I tell the student pharmacists and residents I work with, ‘This is your future being built.’”

Read about the Pharmacy Alumni Association’s 2019 Young Alumnus of the Year.

See previous winners of the PAA Alumnus of the Year award.