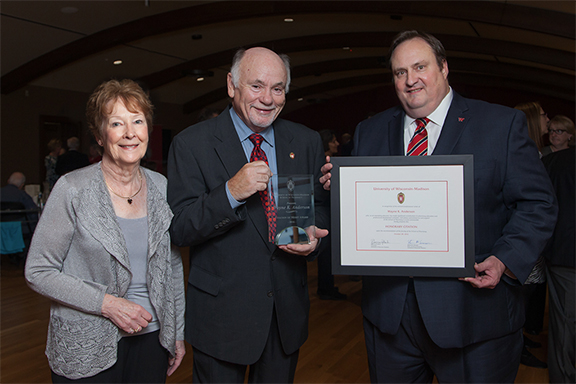 In his almost 40 years of service he significantly advanced the scholarship, research and teaching missions of the school. He established combined BS/MS program in the department of Pharmaceutical Sciences and obtained industry and philanthropic support to enhance opportunities for post-graduate training. He established the PharmD program at UB, and worked to secure its approval by the New York State Department of Education; this was first professional degree program of its kind in the state. He collaborated with the New York State Department of Health and other SUNY health professional programs to help meet the need for medication therapy management for New York’s Medicaid program. His leadership allowed for the continued success and diversification of the post-PharmD residency program and was also instrumental in the creation of fellowship programs with the pharmaceutical industry.

Dr. Anderson’s impact on research has been equally impressive. Over the course of his tenure as dean, research support grew substantially, enabling the school to be recognized as one of the most research intensive in the nation. He established the Pharmacotherapy Research Center (PRC), a central major instrumentation resource, the Center of Excellence in Pharmacokinetics and Pharmacodynamics, and the Center for Protein Therapeutics. A skilled administrator, he was a longtime campus leader in development, leveraging considerable support from alumni and the private sector. Through his leadership, UB’s new home—John and Editha Kapoor Hall evolved from a blueprint to bricks and mortar, opening in 2012.

As a faculty member and researcher in medicinal chemistry, he trained nearly 40 MS/PhD students, 30 postdoctoral scholars, and over 50 undergraduate and honor students. His prolific research program in drug discovery, supported continuously by the National Institutes of Health (NIH) for 25 years, has yielded over 100 manuscripts and eight patents; several anti-HIV and anti-cancer compounds have reached advanced preclinical or clinical trial stages. He served in numerous professional organizations, regional, statewide and nationally. He was the founding Chairman of the Board of Directors of the Erie/Niagara Area Health Education Center and member of the NY Executive Committee. He served on standing committees in the National Institutes of Health, National Academy of Sciences, US Army Medical Command and other related agencies. 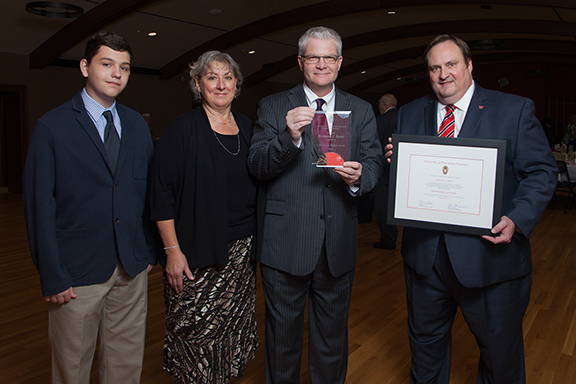 Industrial scientist Richard (Rick) Bertz, PhD, is currently Vice President and Head of Clinical Pharmacology and Pharmacometrics at Bristol-Myers Squibb, responsible for facilitating decision making and driving strategy, overseeing a group of PharmD, MS, MD and PhD scientists. He received a BS in Pharmacy from the University of Wisconsin, worked as a Clinical Pharmacist for 5 years at Columbia Hospital in Milwaukee, Wis., and then earned his PhD in Pharmacokinetics/Pharmacodynamics from the University of Pittsburgh Clinical Pharmaceutical Scientist Graduate Program. During his 20+ year career in pharmaceutical industry, which began at Abbott Laboratories, Dr. Bertz has been involved in all phases of clinical drug development, with a focus on the analysis and interpretation of clinical pharmacology and pharmacometrics data.

During his career, Rick has mentored, coached, managed and developed numerous Clinical Pharmacologists. He has co-taught several academic and industry courses, including a ten year tenure team teaching ‘An Introduction to Drug Metabolism’ short course at the University of Wisconsin-Madison Extension Services in Pharmacy. He has been integrally involved in the completion of components of NDA submissions that have led to worldwide regulatory approval for 3 drugs, 2 to treat HIV and one for HCV. He and several colleagues at Abbott Labs received the Intellectual Property Law Association of Chicago Inventor of the Year Award in 2004. He has a passion for developing life-saving drugs for patients that are in need. 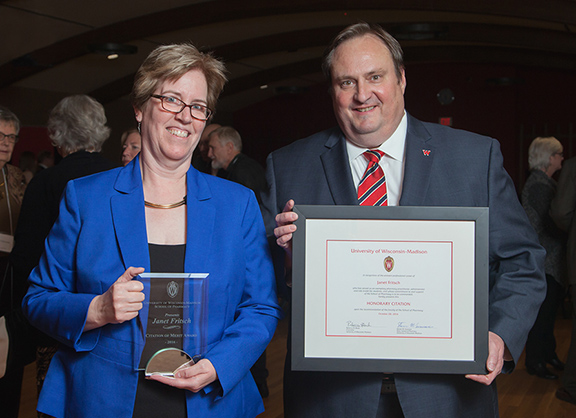 Pharmacist Janet Fritsch graduated from the University of Wisconsin-Madison School of Pharmacy, with honors, class of 1987. The entirety of her professional career has been in independent community pharmacies. She started in Dodgeville, moved to Portage, and for the last 24 years has owned Corner Drug Store in Baraboo. She also owns Corner Drug Clinic Pharmacy in Baraboo.

Janet loves community pharmacy because it not only allows her to serve her patient’s health needs, it also allows her to be a vital part of their lives in the community. In addition to counseling patients about medications and delivering prescriptions to home-bound patients, she also sells tickets for local events in the community and sponsors other community events such as the Santa wagon in the downtown Christmas parade. Corner Drug is the only independent community pharmacy in Baraboo. Corner Drug was the first and still the only pharmacy in Baraboo to blister pack for assisted living facilities in Baraboo and the surrounding area. The pharmacy also provides blister packs for medication management for 80 in-home patients.

Janet has received many community awards throughout the years including the Sauk County Small Business of the Year Award, the Sauk County Historical Society Preservation Award, and the Baraboo Chamber of Commerce President’s Award. She serves the Baraboo community on the Diabetic Advisory Board at St. Clare Hospital, speaks and gives presentations for various community groups on medication management, and sponsors various events for the community. Janet is a clinical instructor for the UW-Madison School of Pharmacy. She enjoys and values sharing her love of community pharmacy with students (or anyone who will listen). Janet is currently on the Pharmacy Society of Wisconsin’s Board of Directors. She has served as a liaison to the PSW Technician Board and was a member of the PSW Technician Task Force and the PSW Re-Branding Task Force. It has been an inspiration and a joy to be part of the PSW Board.

Janet cherishes her 3 daughters and their families: Paige and Luke with their son, Jaxon; Bethany and Bruce, with their daughter, Aubri; and Karissa, currently in pharmacy school at UW-Madison. Janet also serves on the First Presbyterian Church board, finance ministry, and as church treasurer. 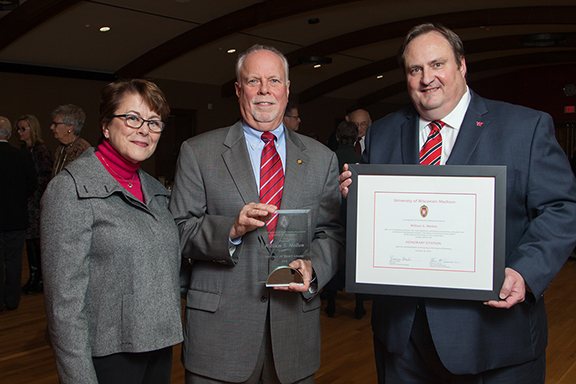 Pharmaceutical sciences educator and researcher William S. Mellon received his BS degree in pharmacy from Northeastern University in 1969 and the PhD in pharmacology with minor emphasis in medicinal chemistry from The Ohio State University in 1977 under the tutelage of Professor Dennis R. Feller. He held an NIH Postdoctoral Fellowship from 1977-1979 at the University of Wisconsin-Madison in the Department of Biochemistry in the laboratory of Professor Hector F. DeLuca.

Dr. Mellon is currently Emeritus Professor of Pharmaceutical Sciences. He served as the Associate Dean for Research Policy in the Graduate School University of Wisconsin-Madison for nine years. In the latter position he has been responsible for a breadth of research-related activities including: development of research policy, chair of the Principal Investigator Committee, aspects of industrial partnerships and Intellectual Property, the Responsible Conduct of Research Program, oversight of Conflict of Interest, Innovative and Economic Development Research Program, research integrity, Export Controls, and research involving animals, human subjects, stem cells, and select agents including aspects of biosafety, biosecurity and dual use. He is the past Chair of the Pharmaceutical Sciences Department, Associate Dean of Graduate Studies and Research and Senior Associate Dean for Academic Affairs in the School of Pharmacy, University of Wisconsin-Madison.

Dr. Mellon held a visiting professorship at Mahidol University in Bangkok, Thailand and is a past Fellow of the Committee on Institutional Cooperation Academic Leadership Program. His research interests include characterizing hormone receptor dynamics and their transcriptional and posttranscriptional regulation of target genes to understand the molecular mechanism of hormone action. Other areas of research emphasis include the elucidation of cellular differentiation of hematopoietic and immune cells induced by sterol hormones, peptides and prostanoid-induced inflammation. His research has been funded from the National Institutes of Health, private industry and foundations. He has mentored 11 graduate students, 2 postdoctorals, and has provided independent laboratory experiences for nearly 80 undergraduates. He has taught pharmacology at both the undergraduate and graduate level and also has been involved with teaching in the biology curriculum on the Madison campus and received several teaching awards from the School of Pharmacy, University of Wisconsin-Madison. He has been a member of the American Society of Biochemistry and Molecular Biology, the Endocrine Society and the American Chemical Society.