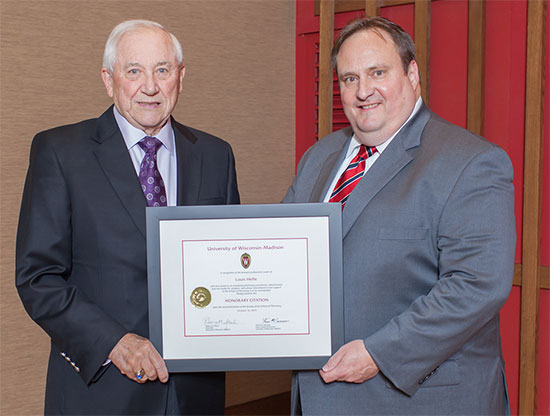 Upon returning from four years of military service during the Korean War, Louis Hefle entered the University of Wisconsin-Madison School of Pharmacy. Following graduation in 1958 with a BS degree in pharmacy Hefle was employed as a staff pharmacist in both community and institutional pharmacies. During this time he served as a resource faculty member for the UW-Madison Extension Services in Pharmacy at the Fall and Spring Institutes and the Education Telephone Network.

For 29 years he was a full-time faculty member at the Milwaukee Area Technical College developing basic pharmacology and drug administration curriculum and continuing education programs for eight health occupations. This included teaching classes in nursing, dental hygiene, respiratory therapy, medical assisting, occupational therapy and surgical technician programs. He developed the pharmacy section of a pilot Medication Assistant program for the Wisconsin Department of Health. He also developed the curriculum for a one year diploma program for pharmacy technicians. Until his retirement in 2013, he was self-employed as a pharmacy services consultant to small and specialized hospitals, as well as numerous long term care facilities. He served on the steering committee for the University of Wisconsin-Madison Pharmacy Project for Life Long Learning for Pharmacists and was a member of the Pharmacy Society of Wisconsin Technician Project. He was also involved with the UW Extension in Nursing—instructing at various campuses. Additional past involvement as a pharmacist on health-related committees included corporate member of the Health Systems Agency of Southeastern Wisconsin, co-chairman of the Regional Facilities committee, Chairman of the Nursing Review committee, member of the AD Hoc committee for Nursing Home Guidelines, and member of the Ozaukee County Public Health Home Health Committee. Through his Ozaukee County Public Home Health Committee he partnered with the Ozaukee County Nutrition and Public Health program to provide instruction on management of medications to senior audiences.

Included in his other board service is a member of the Board of Directors for Autism, Brain Injury and the Epilepsy Association of Southeastern Wisconsin, member of the Ames National Diabetic Council for which he provided articles for the “Diabetes In The News” publication. Hefle’s experience and expertise has been recognized through national speaking invitations including keynote speaker at the National Convention of the American Pharmaceutical Association in Montreal on Consultant Pharmacy in Long Term Care Facilities, teaching the Pharmacy Section of the state wide Nursing Home Administrators Licensing Course, and presentations to the American College of Nursing Home Administrators. Hefle has been active in his community as a Plan Commissioner for 12 years for the Town of Grafton, member of the Ozaukee County Pandemic Committee, and member of the Ozaukee County Smart Growth Committee. His horticultural know-how has allowed Hefle to continue to provide leadership and mentoring in an area that gives him great joy—roses. He is a member of the American Rose Society, and was recently awarded the “Master Rosarian Certification.” He is the recipient of the North Central District of the American Rose Society 2014 “Outstanding Consulting Rosarian Award,” member of the Greater Milwaukee Rose society and past president of the organization, member of the UW Extension Master Gardener Program, Certified Master Gardener, and presently chairman of the Education Committee of the Ozaukee Master Gardeners. 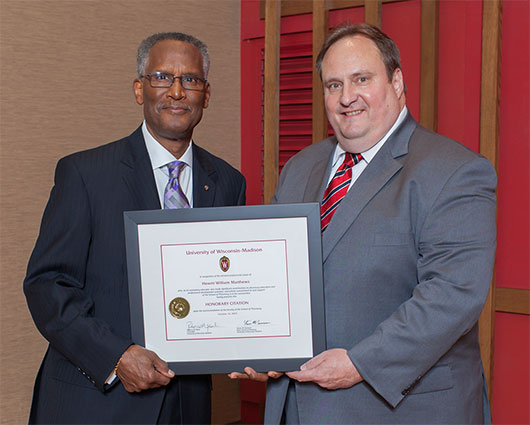 Hewitt W. “Ted” Matthews is Dean of the Mercer University College of Pharmacy in Atlanta, Georgia and the Hood-Meyer Professor of Pharmacy Distinguished Chair. With more than 25 years of service, Matthews is one of the longest serving deans at the same pharmacy school in the nation. Through his leadership, the pharmacy program has gone from being unranked to being ranked the fourth best private pharmacy school in the nation by U.S. News and World Report. In 2012 Dr. Matthews was named Senior Vice President for Health Sciences, overseeing the Mercer University Health Sciences Center where he directs the cooperative initiatives among the University’s health sciences schools and colleges, which include the school of medicine, college of pharmacy, school of nursing, and the college of health professions (composed of physical therapy, physician assistant, and public health programs).

He has served as President of the National Pharmaceutical Association as well as Founder and Chairman of the Board of Directors of the National Pharmaceutical Association Foundation (NPhAF). Since the inception of the NPhAF in 2000, the Foundation has awarded over 289 scholarships and over 75 book awards, totaling more than $350,000 awarded to undeserved pharmacy students, strictly on merit base. In addition NPhAF has given more than $500,000 to pharmacists and pharmacy students for continuing education support. He serves on several editorial boards of scientific publications, has over 100 publications, given more than 300 national and international presentations, and been awarded over $2 million in research grants and contracts.

Dr. Matthews received a BS in chemistry from Clark Atlanta University and a BS in pharmacy from Mercer University. He received his MS and PhD in pharmaceutical biochemistry from the University of Wisconsin-Madison where he was a National Institutes of Health Pre-Doctoral Fellow and a Fellow of the American Foundation for Pharmaceutical Education. Matthews also received the Rennebohm Teaching Assistant Award as a graduate student at the University of Wisconsin-Madison School of Pharmacy. He did his postdoctoral work at the Centers for Disease Control and Prevention. 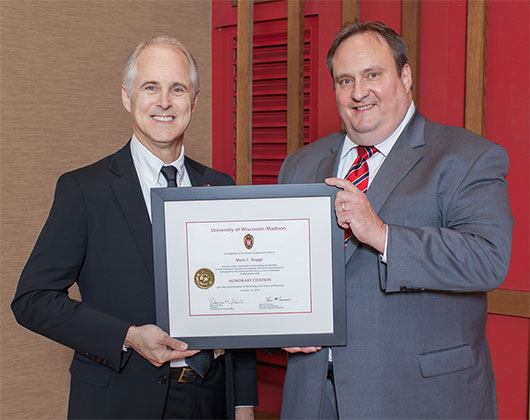 Mark C. Rogge is Senior Director for Early Development Sciences at Biogen Idec Corporation in Cambridge, Mass. He received BS and MS degrees in pharmacy from the University of Wisconsin-Madison in 1982 and 1984 respectively. He also received a MS degree in pharmaceutics and PhD degree in pharmacy from the University of Michigan. Prior to joining Biogen Idec in 2007, he worked for ZymoGenetics and Immunex in Seattle, Wash.

His drug development accomplishments include being a member of teams that developed Levaquin™, Avonex™, Enbrel™, Tecfidera™, and provided oversight on the development of Recothrom™, Plegridy™, Eloctate™, Alprolix™ and Zimbryta. Dr. Rogge is a Fellow in the American College of Clinical Pharmacology (ACCP), has chaired the Pharmacokinetics, Pharmacodynamics and Drug Metabolism Section of the American Association of Pharmaceutical Scientists (AAPS), and is currently the chair of the Clinical Pharmacology Leadership Group for the International Consortium on Innovation and Quality in Pharmaceutical Development. He has served on the Editorial Advisory Board for the Journal of Pharmaceutical Sciences since 2001. He has 48 peer-reviewed publications, nine invited international plenary presentations, 60 podium/poster presentations, three patents, and was co-editor for the book Preclinical Drug Development. As a volunteer he has served on the University of Washington School of Bioengineering Advisory Board, is a founding member of BioSafe (BIO Expert Preclinical Safety& PK/PD Scientific Advisory Committee), serves on a USP Expert Panel on Complex Molecules, and was a founding Leadership Planning Committee member for the University of Wisconsin-Madison Land O’Lakes Conference on Drug Metabolism/ Applied Pharmacokinetics.

Dr. Rogge’s work in biotechnology was fundamental in defining the preclinical and clinical pharmacology properties of therapeutic glycoproteins. This work, in part, defined the regulatory pathway for development of complex molecules and provided a framework for the approval process of biosimilar products. These broader activities, and his specific efforts with the UK National Centre for the Replacement, Refinement & Reduction of Animals in Research, provided significant support for a reduction in animal testing of biotechnology drugs. 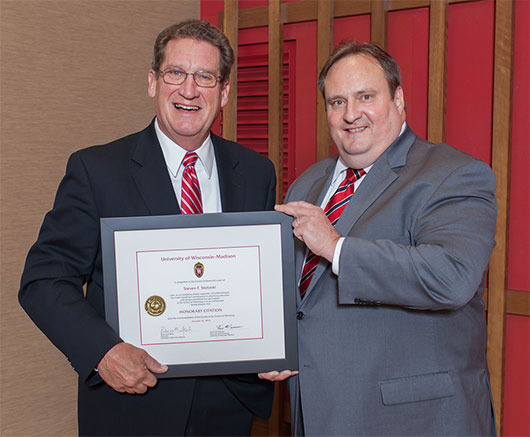 For Steven F. Skolaski, his relationship with UW-Madison pharmacy and pharmacists began in the early 1960’s when he worked with his uncle Robert Vanderpoel, pharmacist and owner of a drug store on the corner of Olin Avenue and Park Street in Madison, Wis. In 1965 he began his career with Rennebohm Drug Stores holding several positions. The same year he started with Rennebohm he began a six year service in the Wisconsin Air National Guard. He received his BBA degree in accounting from University of Wisconsin-Madison in 1971 and was named Controller at Rennebohm in 1972. He assumed the role of CFO in 1976 and remained there until it was sold to Walgreens in 1980.

Following Rennebohm’s, Skolaski worked at Master Graphics, one of the Midwest’s leading providers of technology solutions for the manufacturing, building, civil and education industries, eventually serving as president and owner. The company was sold to employees in 2003. Under his leadership, Master Graphics received numerous business awards from companies including James River, Xerox, Autodesk, and the Trane Company.

In 1985 Skolaski was named Director of the Oscar Rennebohm Foundation. Since 1987 he has served as President and Treasurer. In his capacity as President and Treasurer of the Rennebohm Foundation, Skolaski has played a key role in advancing critical projects within the UW-Madison School of Pharmacy. Working closely with the Rennebohm Foundation board and seven deans at the school, he has been instrumental in securing financial support to establish the Rennebohm Lecture Room, Lenor Zeeh Computer Lab, John Sonderegger Research Lab, the annual Rennebohm Lecture Series—which will celebrate its 65th year in 2016, the Rennebohm Teaching Assistant Awards, the Rennebohm Dissertation Award and the St. Vincent de Paul charitable pharmacy. Mr. Skolaski, along with Mr. Lenor Zeeh, endorsed the UW-Madison School of Pharmacy request to the Oscar Rennebohm Foundation for the lead gift toward the construction of Rennebohm Hall and the Lenor Zeeh Pharmaceutical Experiment Station. The most recent example of Skolaski’s support of the School was his work with Lenor Zeeh for a major gift that would help to support and advance the programs of the Lenor Zeeh Pharmaceutical Experiment Station into the future. Skolaski’s dedication to the community and philanthropic efforts is evident through other board service including the Hilldale Board of Directors, Edgewood College Board of Trustees, University of Wisconsin Foundation Board of Directors, University of Wisconsin Foundation Audit Committee Chair, University of Wisconsin Medical School Board of Advisors, and Kelab Director. In recognition of his service to the community Skolaski received the Paul Harris Fellow Award from Madison Downtown Rotary in 1985.