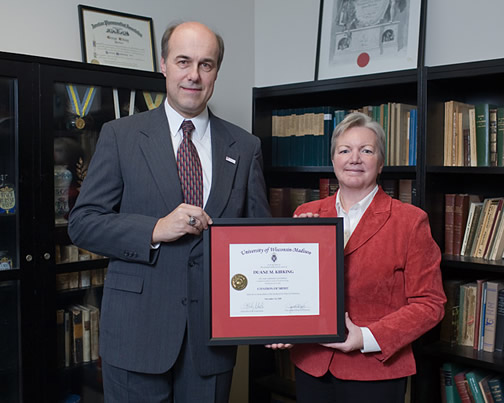 Duane M. Kirking received his BS in pharmacy from the UW School of Pharmacy in 1974. He went on to earn his doctor of pharmacy degree at the University of Kentucky (’77), as well as a master of arts degree in public administration (’79) and a doctor of philosophy degree in Administrative and Social Sciences (’80) at Ohio State University. Kirking joined the University of Michigan faculty as an assistant professor of medical care organization at the School of Public Health and as an assistant professor of pharmacy administration. Kirking served as the department chair and professor of social and administrative sciences until his recent retirement after a 27 year career at Michigan.

During his career, Kirking distinguished himself as an accomplished researcher, academician, and leader. He has presented and published widely on a variety of topics and conducted research related to appropriate medication use and cost-effective medication therapy.

Kirking’s record of research and publications, service to the profession through his professional organizational leadership, and distinguished academic career made him a deserving candidate for recognition. He has remained truly loyal to his Wisconsin roots, despite his academic career at the University of Michigan. He and his wife, Marilynn, have contributed generously to the new building fund, to the Wiederholt Distinguished Graduate Fellowship and to an award in Joe Wiederholt’s name to recognize graduate student research. 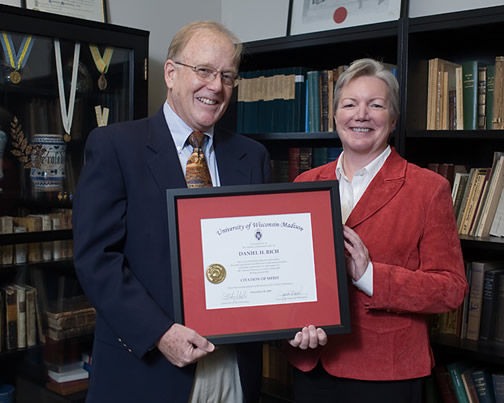 Daniel H. Rich received his BS degree in chemistry in 1964 from the University of Minnesota and his PhD in organic chemistry in 1967 from Cornell University. He held postdoctoral appointments at Cornell and at Stanford University before joining the faculty at the University of Wisconsin-Madison School of Pharmacy in 1970. He was promoted during his 37-plus year career at the UW-Madison to professor of medicinal chemistry and held an affiliate appointment as a professor with the Department of Chemistry. He served as assistant dean of graduate studies from 1976-1980 and, in February 2005, was appointed associate dean for research and graduate studies.

Rich’s research focused on the synthesis and conformational analysis of cyclic peptides and the design and synthesis of inhibitors of therapeutically important enzymes. His pioneering work in the aspartic protease field laid the groundwork for the development of the HIV protease inhibitors used to treat HIV infections and AIDS and opened up a new arena of research in medicinal chemistry. He has published well over 250 articles and trained 35 PhD and 100 postdoctoral associates, many of whom have risen to leadership positions in the pharmaceutical industry.

Rich has presented numerous invited lectures both nationally and internationally and served as a consultant in drug design and discovery, especially in the area of design of protease inhibitors for all of the major pharmaceutical companies. He is the author or co-author of more than 250 publications in the fields of synthesis, conformation and mechanism of biologically active peptides and design of enzyme inhibitors.

He has demonstrated exceptional leadership skills in administrative roles at the University of Wisconsin-Madison and as president of the American Peptide Symposium. Other professional involvement includes membership and service as chair in the bioorganic and natural products study section for NIH, as associate editor for the Journal of Medicinal Chemistry and as an active member within the Medicinal Chemistry Division of the American Chemical Society.

Rich retired in July 2006, leaving an extraordinary legacy, and his accomplishments will not soon be matched nor surpassed. 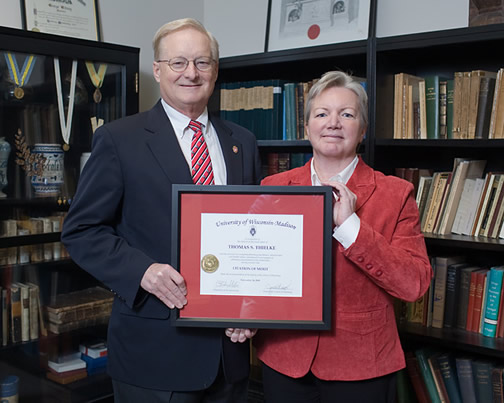 Thomas S. Thielke received his BS from the UW-Madison School of Pharmacy in 1967 and completed the pharmacy administrative residency at UW Hospital and Clinics (UWHC), earning his master’s degree in hospital pharmacy from the UW-Madison in 1969. Thielke has spent his career at UWHC. During his almost 40-year tenure, he has served in a variety of roles, including assistant director of pharmacy and central services, associate director of pharmacy and central services, director of pharmacy and, in his current role, he is the vice president for professional and support services. The comprehensive pharmacy services provided at UW Hospital and Clinics are recognized as among the best in the country, and many were developed under Thielke’s leadership. During his distinguished career, Thielke has been a member of the UW School of Pharmacy faculty as a clinical professor.

Well known as an innovator and leader in pharmacy, Thielke is a sought-after speaker and has made numerous presentations to both domestic and international audiences on a broad range of topics. He is also a widely-published author whose work has appeared in the American Journal of Health-System Pharmacy, Topics in Hospital Pharmacy Management and JAMA. Thielke has been extraordinarily active in pharmacy organizations and is a past president of both ASHP and the Wisconsin Society of Health-System Pharmacists. He was instrumental in the formation of the One Voice-One Vision steering committee that ultimately resulted in the formation of the Pharmacy Society of Wisconsin and served as the first chairman of the board for the new organization. He is also a member of the American Pharmacists Association and the Academy of Managed Care Pharmacists.

On an international level, Thielke also has distinguished himself as a leader in the International Pharmaceutical Federation (FIP). He has been an active participant in FIP congresses around the world and served as the vice president and president of the FIP hospital pharmacists section. Over the years, Thielke has been recognized by his peers and colleagues with numerous awards and honors. Twice named Hospital Pharmacist of the Year in the state of Wisconsin by the Wisconsin Society of Hospital Pharmacists, he has also been recognized as a fellow of the American Society of Health-System Pharmacists and as Innovative Pharmacy Practitioner of the Year by the Wisconsin Pharmacists Association. He received the Presidents Award from WSHP and was chosen as recipient of the Winston J. Durant Lecture Award and the Medication Safety Leadership Award from McKesson. Most recently, Thielke was recognized as the Harvey A.K. Whitney Lecture Award winner by ASHP in 2005 and received the Donald E. Francke Medal from ASHP in 2006.

This year, Thielke was awarded the John W. Webb Lecture Award by ASHP. This award recognizes a hospital or health-system pharmacy practitioner or educator who has distinguished herself or himself through extraordinary dedication to fostering excellence in pharmacy management. Thielke’s long-time involvement with the UW Hospital and Clinics pharmacy administrative residency program is the most prominent example of this dedication. An early graduate of the residency program, Thielke followed in the footsteps of Winn Durant and Dave Zilz as director of the program, which recently celebrated its 45th anniversary. The program has graduated more than 250 pharmacy leaders who hold leadership positions in hospitals and health systems in nearly every state in the country.

Thielke’s career demonstrates the strength of his commitment to the pharmacy profession and the development of a new generation of pharmacy leaders. There are few graduates of the University of Wisconsin-Madison and the School of Pharmacy who have consistently demonstrated Thielke’s enthusiasm for his profession, his alma mater and his beloved Badgers. His regular encouragement to pharmacy students and his pharmacy colleagues to “FIRE UP!” helps to ignite the passion for the pharmacy profession in all of us.