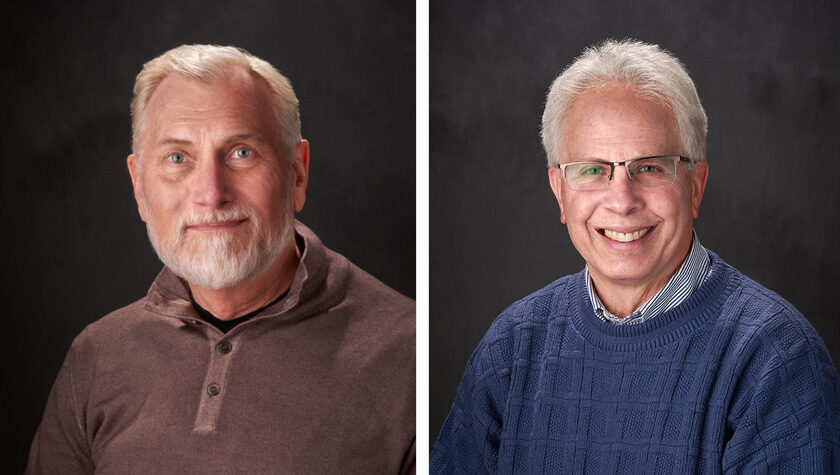 Ron Sorkness and Bob Breslow have left a lasting impact on practice, research, and teaching

The University of Wisconsin–Madison School of Pharmacy is celebrating the careers of two faculty members as they retire from the School: Professor Ron Sorkness and Associate Professor Bob Breslow.

Both were members of the Pharmacy Practice Division for decades, and both have contributed to shaping the careers and expertise of generations of pharmacists. The two also share another likeness: They are both alumni of the School of Pharmacy and have experienced the evolving curriculum as both student and teacher.

They and their School of Pharmacy colleagues share reflections on their careers spent in research and patient care, what they’ve enjoyed about teaching, and what’s on the horizon.

Sorkness started as a student at the UW–Madison School of Pharmacy in 1969. Fifty-one years later, he is retiring after leaving his mark on hundreds of pharmacists, pulmonary disease research, and countless colleagues.

As a professor, researcher, and mentor, Sorkness has been a part of the School for 43 years, four of which were spent as chair of the Pharmacy Practice Division, and he has served on numerous committees to guide and shape the School’s programming.

“Ron is parsimonious with his words, but when he speaks, he’s not speaking just to talk and to show up — he always has excellent insight,” says Professor Barry Gidal, who chaired the Pharmacy Practice Division until July 2019. “He can help find answers to whatever question you’re debating, and you can always count on Ron to be able to cut through the haze.”

As a student, Sorkness was interested in healthcare and chemistry, and he had planned to get a PhD and carve out a career in research. But during his time as an undergraduate, clinical pharmacy was gaining traction, and Sorkness found himself fascinated by the evolution of pharmacists’ roles. After he graduated, he became the first resident at UW Hospital to pursue an emphasis in clinical pharmacy and teaching. While he was there, he developed an interest in critical care.

“Critical care at UW Hospital was just beginning to expand and become more of a central unit, and I quickly found that becoming my practice focus,” says Sorkness.

He started his first full-time faculty job at the SUNY-Buffalo School of Pharmacy as an assistant professor and became the first clinical pharmacy specialist at the E.J. Meyer Memorial Hospital, now the Erie County Medical Center, where he developed clinical rotations for students and collaborated with internationally renowned trauma expert John Border’s research group.

Since joining the School, Sorkness has extensively studied asthma and airway obstruction and authored more than 100 peer-reviewed publications, reviews, and book chapters, and he says that his biggest achievements are these contributions to research.

“The ability to create something new, some new knowledge that hasn’t been there before, and you have that published — that’s there forever,” says Sorkness. “Those are lasting achievements that won’t go away.”

One of his chief research breakthroughs is in the understanding of different forms of asthma. In collaboration with Robert Lemanske, professor of pediatrics and medicine at the UW School of Medicine and Public Health, he studied rat models to examine the effects of allergic inflammatory responses on lungs and developed methods to measure lung function. Sorkness, with his colleagues from the Severe Asthma Research Program (SARP), identified key physiological differences between severe and non-severe forms of asthma to show “why individuals with severe asthma do not respond well to treatment.”

“The ability to create something new, some new knowledge that hasn’t been there before, and you have that published — that’s there forever. Those are lasting achievements that won’t go away.”
—Ron Sorkness

One of the most poignant memories of Professor Beth Martin (BS ’90, MS ’03, PhD ’06) from her time as a young faculty member is a conversation with Sorkness that changed her perspective on teaching.

“As an instructor, you imagine students wearing Velcro suits with me throwing tennis balls at them and trying to make all the information stick,” says Martin, who is now assistant dean of Assessment, Teaching, and Learning and current chair of the Pharmacy Practice Division. “Ron said, ‘Every year, I take more material out of my lectures to focus on three elements I really need to have to stick with students so that when I see them on clinical rotations, they will remember these three things.’ It was such a good philosophy to have, especially as a new instructor.”

Sorkness says the School has advanced on many fronts since he helped implement and expand the PharmD program in the late ‘80s and early ‘90s as accreditation requirements shifted away from a bachelor’s degree and toward a PharmD. The new PharmD curriculum was four years, with one full year of clinical rotations, plus at least two years of undergraduate work before beginning the PharmD program.

“When we first started as clinical faculty, all of our time was spent in practice and teaching,” says Sorkness. “Over the years, that has really evolved to include a greater involvement in creative activities such as research and program development.”

“He can help find answers to whatever question you’re debating, and you can always count on Ron to be able to cut through the haze.”
—Barry Gidal

Retirement is a time for relaxation — but for Sorkness, that means pursuing hobbies old and immersing himself in new environments and experiences.

Among his plans for the coming years, he’ll be brushing up on new techniques and compositions for classical and jazz guitar, both of which he’s been playing for decades.

Sorkness also likes to read and travel, and though his plans for the summer and fall were disrupted by the COVID-19 pandemic, he hopes to resume traveling in 2021. For more cultural exploration, he’s going to expand his linguistic capabilities.

“I need to keep my brain stimulated, so one of the first things I’m going to do is study some languages,” says Sorkness. “I’m going to start with Italian and we’ll see how that goes.”

Breslow — known for his humility and teamwork — has inspired students and helped patients improve their health for 44 years.

He joined the School in 1997 to coordinate the non-traditional Doctor of Pharmacy program. As pharmacy schools nationwide transitioned to doctor of pharmacy programs, many universities, including the School of Pharmacy, developed a shortened program designed to deliver the additional coursework to practicing pharmacists who had already earned a bachelor of pharmacy and wanted the new credential.

For the next 10 years, he worked on the program and was slowly absorbed into the Pharmacy Practice Division of the School, while maintaining a specialized practice in geriatric pharmacy. He became a permanent member of the division in 2007.

“Bob has always been very humble about his talents,” says Martin. “He never gives himself enough credit for what he knows and how he shares that knowledge, and he has added so much to the research I’ve done with him because of his skill set in solving problems.”

Although Breslow has dedicated more than four decades to pharmacy practice and holds his time serving patients as one of his favorite achievements, he first started out at UW–Madison with a major in political science and plans for law school.

While considering other marketable career paths, he left it up to chance and flipped a coin, which led him to the School of Pharmacy.

“It all started with the flipping of the coin, and it’s been a pretty good life for 44 years,” he says.

As a pharmacy intern, he discovered his deepest interest was in hospital pharmacy, and after graduating he worked at St. Mary’s Hospital in Madison for five years, and then moved to UW Hospital for 16 years, until he joined the School in 1997.

As he built a reputation in practice, he grew into leadership roles with a broad influence. In the ‘90s, he was elected the second president of the Pharmacy Society of Wisconsin and served as the president of the School’s Pharmacy Alumni Association.

“I’m very proud of those times, being able to have an impact on not only the profession of pharmacy but the practice itself,” says Breslow.

“Much of what I remember and appreciate is the satisfaction that I got and the acknowledgement from patients that I was doing something to help them — that I cared for them, paid attention, and tried to help them be healthy and overcome their health issues.”
—Robert Breslow

A few years ago, the School held camps for students before the start of classes. And Breslow was the first to address all students.

“We did that very purposely because we talked about engaging with older adults for the entire first year, and Bob was the expert since he has geriatrics as a specialty,” says Martin. “He has a lot of enthusiasm about his topic and his level of interaction — you can’t replicate it.”

“He was amazing in his teaching,” says Gidal, who has taken continuing education programs led by Breslow and hosted by the School’s Division of Pharmacy Professional Development. Breslow was also a frequent lecturer in Gidal’s pharmacotherapy course on neuropsychology. “He is truly a very gifted teacher, and I walked away learning a lot about things that I thought I knew already.”

Through his many years of teaching, Breslow says what has stuck out to him most is the impact on students’ careers.

“It was wonderful to receive the acknowledgement by students that what we provided in terms of their education was meaningful and helped them to be better practitioners at the time of graduation,” he says. “It reinforced that what I and other colleagues were doing was quite meaningful and would make a difference in improving the quality of clinical practice around the country.”

As he looks back on his career, Breslow recalls his interactions with patients as some of his fondest moments.

“Much of what I remember and appreciate is the satisfaction that I got and the acknowledgement from patients that I was doing something to help them — that I cared for them, paid attention, and tried to help them be healthy and overcome their health issues,” says Breslow. “Their comments were really a pat on the back, and it was meaningful knowing that my colleagues and I were making a difference in patients’ lives.”

“He never gives himself enough credit for what he knows and how he shares that knowledge, and he has added so much to the research I’ve done with him because of his skill set in solving problems.”
—Beth Martin

He and his wife have horses, and they often travel with them. Like Sorkness, he plans on traveling post-pandemic to Australia and New Zealand, and a river cruise in Europe.

In addition to travel, Breslow is looking forward to volunteering in free clinics as a pharmacist. He has always been interested in carpentry, and he plans on pursuing that in his leisure time.

“I picture Bob riding off on a horse right into the sunset, because that’s what he does,” Martin says. “He and Ron have both been an amazing success as being part of the School in their own different ways.” 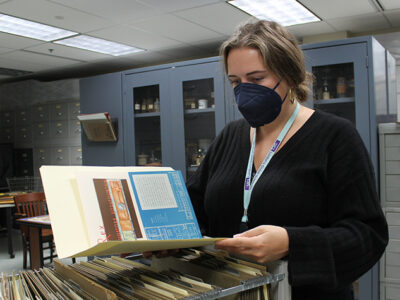