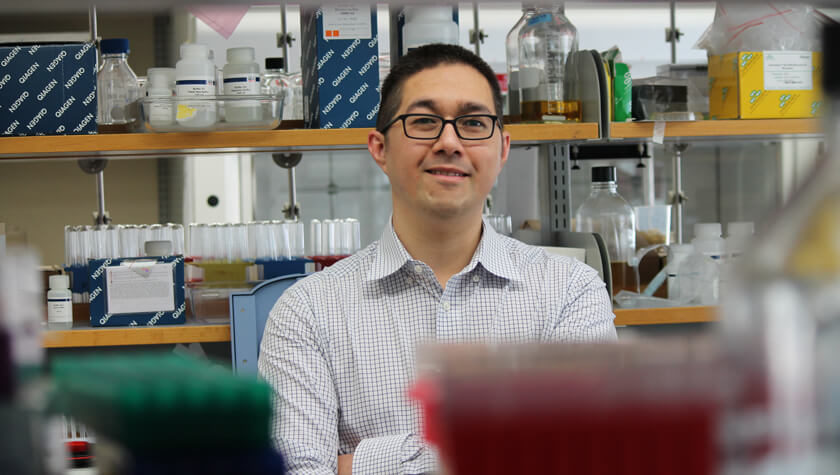 Jason Kwan is an Assistant Professor within the Pharmaceutical Sciences Division at the School of Pharmacy.

Life is tough if you’re a beetle.

Things want to eat you, and you can’t much stop them. You’re very small in a big, big world. And even if you’re lucky enough to reproduce, a nasty fungus might come by and destroy your eggs. Bummer.

Fortunately for the liltingly named Lagria villosa beetle found throughout South America, its ancestors long ago picked up some bacteria with quite a trick. The bacteria contained a gene sequence that taught it to make the fungus-fighting chemical lagriamide. So Lagria learned to coat its eggs with the bacteria, helping them survive the dangerous fungi lurking in the soil. An alliance was born.

In new research, scientists in the University of Wisconsin–Madison School of Pharmacy reveal the genetic history of this beetle-bacteria partnership. They found that the lagriamide-producing microbe has steadily lost a trove of genes — and gained several from other bacteria — as it and the beetle became more dependent on one another.

This kind of genetic detective work can help researchers decide where and how to look for new drugs.

“Half of the drugs we use today were discovered in natural molecules first, but the question is where to look for new kinds of chemicals,” says Jason Kwan, a UW–Madison professor of pharmacy who led the new study. “We’re trying to understand how and why small molecules evolve, because that will allow us to work out what kinds of environments to look for specific types of molecules that do certain things.”

Kwan collaborated with researchers in Germany to complete the work, which was published Feb. 25 in the journal mBio.

Of the estimated one trillion species of bacteria in the world, just a fraction can be grown in the lab. A lot of symbiotic bacteria can never be isolated, because they have lost the ability to grow outside of the plants or animals that host them. Yet hosts keep these bacteria around precisely because they produce useful chemicals, ones that might be useful to humans as well.

So, Kwan turned to advanced genetic sequencing to reveal the genomes of every bacterial species in the Lagria beetles collected by his German colleagues. Soybean pests in South America, Lagria beetles have evolved structures for harboring bacteria that allow them to pass the bacteria on to their offspring. Scientists believe that lagriamide is what drives this partnership, and Kwan’s team wanted to know which bacteria made the antifungal.

Sifting through all the genetic information, the researchers saw that the beetle hosted a number of bacteria known as Burkholderia. The most abundant Burkholderia species was also the only one capable of making lagriamide, and this species had already lost a lot of key genes. Its genome had been reduced to just a quarter the size of the genome of its closest, free-living relative.

Kwan’s team found that the bacteria acquired a suite of genes that allowed it to make lagriamide sometime between five and 10 million years ago. The bacteria picked up the genes from some other, unknown microbe. This kind of gene swapping is common among bacteria.

“So, we think that these lagriamide genes were acquired by a free-living ancestor of this symbiont. And then the symbiosis was established because making lagriamide gave a survival advantage to the beetle, perhaps because more of its young could survive fungal infections,” says Kwan.

Over the eons, as the bacteria and beetle became more dependent on one another, the microbe shed most of its genes. Surviving inside a host just doesn’t require as many genetic tools as living alone does, and those unnecessary genes mutate until they dissolve altogether.

But even as the bacteria dispensed with genes it no longer used, it still picked up new genes from related microbes harbored by the beetle. That loss-and-gain is a sign that the smaller genomes common in symbionts aren’t just a one-way street toward decline as has been thought before.

The lesson, Kwan says, is that researchers searching for new drugs should trust evolution, which has honed potent symbiotic partnerships over millions of years.

“This study is an example of what evolution can do in terms of shaping bioactive molecules,” says Kwan. “But it also illustrates that some of the most important molecules are likely made by symbionts that can’t be cultured in the lab. So, it underlines the importance of studying all the microbes out there, not just the ones we can grow.”

This research was supported in part by the National Science Foundation-funded UW–Madison Center for High Throughput Computing.