Professor Ron Burnette Retires from the School of Pharmacy 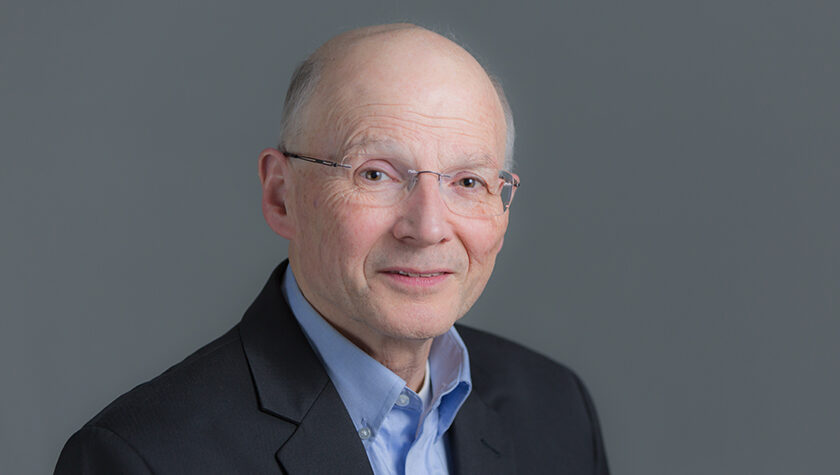 Burnette has spent nearly 40 years researching, leading, and teaching at the School

“Well, it’s a bit unusual,” says Professor Ron Burnette of his path to the University of Wisconsin–Madison School of Pharmacy.

He started his educational career as an electrical engineer, but while he was in graduate school at Stanford, he took a course on bioelectronics, which he found fascinating. At the time, in the 1970s, the main application of his engineering specialty — lasers — was military, specifically missile guidance systems.

That path wasn’t attractive to him, and he was instead drawn to more people-centric fields. After speaking with the instructor of the bioelectronics course, Burnette decided to pursue pharmacy.

“I’ve always loved chemistry, and pharmacy seemed more helpful to mankind,” says Burnette. He simultaneously studied pharmacy and pharmaceutical chemistry at the University of California San Francisco, at the encouragement of the dean of the school.

“Enrolling in both programs was the best advice I ever received,” says Burnette. “The two fields are synergistic and gave me an advantage when explaining concepts to pharmacists — and my future pharmacy students.”

Burnette’s journey with the School of Pharmacy began in 1983, as an assistant professor of pharmaceutics, shortly after completing his PhD in pharmaceutical chemistry.

“UW–Madison was very attractive to me primarily because of its highly interactive research environment and the ability to teach at multiple different levels,” he says.

In April 2021, after 38 years with the School of Pharmacy, Burnette is retiring. Over the elapsing years, Burnette has built an active research group that produced 30 publications, held multiple leadership positions at the School of Pharmacy — including chair of the Pharmaceutical Sciences Division for nine years and associate dean of faculty affairs for more than a decade — delivered lectures at several international conferences, trained eight graduate students, and taught hundreds more undergraduate, PharmD, and graduate students.

“I feel very fulfilled that I was able to research and also teach in that area over most of my career,” says Burnette.

Burnette might have left the electrical engineering profession, but his training in that area informed his research at the School.

“I was hired at the School of Pharmacy because of my research in transdermal drug delivery,” says Burnette. “I developed an artificial blood substitute and different methodologies for using electric currents to deliver drugs through the skin, namely iontophoresis.”

In iontophoresis, Burnette used an electric field to increase the permeability of the skin, which allowed the transport of molecules. The skin acts as an impermeable barrier for most drugs, but he developed an iontophoretic device to bypass that barrier.

Through electrostatic repulsion and electroosmosis, his device could drive drug molecules through the skin and into systemic circulation.

“I have a very unique combination of abilities, and I was able to use that to do something that others hadn’t really done before,” says Burnette of his background in electrical engineering.

His early work at the School extensively revolved around transdermal drug delivery, Burnette’s research evolved to also focus on pharmacokinetics, trying to answer one question: How does a particular drug behave once it’s in the body?

“The third area of research I developed, in addition to transdermal drug delivery and pharmacokinetics, was understanding how to go from pharmacokinetics — a very macroscopic way of dealing with how drugs distribute, metabolize, and are absorbed in the body — all the way down into the molecular and atomic level,” says Burnette.

His most recent publication — a collaborative paper with the UW Department of Medical Physics — combines computation chemistry and quantum theory with pharmacokinetics to predict how drugs exist in the body and change over time.

Despite a breadth of publications and research, Burnette, who earned a dozen Outstanding Teacher of the Year awards and a Teaching Innovation award, deems teaching his greatest achievement. In addition to his lab work, he taught several pharmacokinetics courses to both undergraduate and graduate students and in industry.

Burnette also spent a great amount of his time at the School in leadership positions, as associate dean of faculty affairs, chair and vice chair of the Pharmaceutical Sciences Division, and a member of several committees and boards to enhance research and education around the campus as a whole.

“The main thing I miss is my interactions with all my colleagues, not only in the Pharmaceutical Sciences Division, but throughout the School. We have a wonderful group of faculty and staff,” says Burnette, who began to step back from these roles in July 2020. “Serving as division chair was very, very fulfilling because I was able, in some small way, to help the division as whole.”

Even in retirement, Burnette is dedicating his time to teaching and exploring new areas in science.

Burnette’s wife works with the Kumon Math and Reading Center, on Madison’s west side, which is a teaching program for pre-K through high school students that is centered around the Japanese curriculum. Over the years, he has participated in the program to teach students math and robotics, specifically how to program. Since his retirement, he’s been able to spend more time with the children in this program and is working on a new way to get them to realize the possibilities of math.

“My retirement is still evolving,” says Burnette. “What I’m spending most of my time on right now is developing an understanding of the use of solar energy and its impact on climate change.”

“That’s how I’m spending my retirement — helping children see the application of what they’re learning, and hopefully motivating them to go into a field that can help the world.”
—Ron Burnette

For solar energy, scientists can manipulate different parameters, such as the way the solar panels are tilted and how the energy is converted to see different results. Burnette has gone through three different college-level textbooks on meteorology and climate change and is currently on his fourth. He’s developing a series of questions and problem sets that are keyed to different levels of math — all the way from elementary school to calculus — that relate to climate change.

“The point of it is to allow the kids who are interested — we have about 300 students currently enrolled in the Kumon program — to have a chance to see that the math they’re learning can be used to address one of the some really significant problems that the world faces right now, which is trying to mitigate climate change,” says Burnette. “One way to do that is through the use of solar energy.”

Circuit design, such as those in solar panels, is an area that Burnette has always been interested in, and he continues to draw from his electrical engineering training to further the students’ understanding of solar energy through the development of hands-on interactive demonstrations.

“That’s how I’m spending my retirement — helping children see the application of what they’re learning, and hopefully motivating them to go into a field that can help the world,” says Burnette.