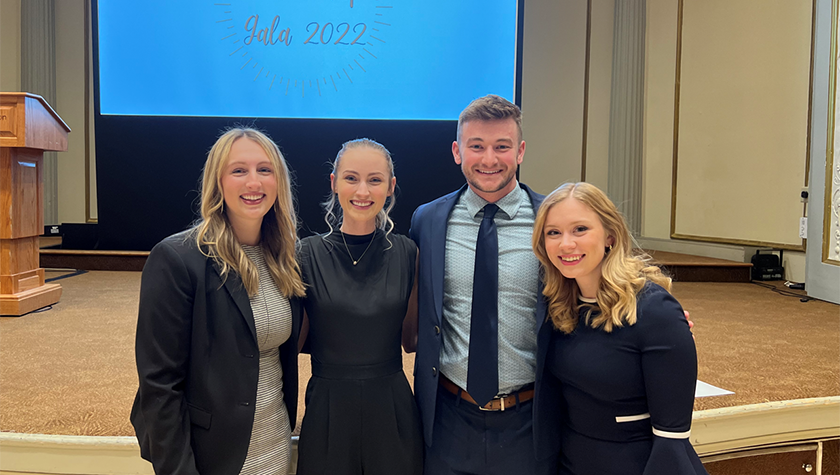 “It is really exciting to see the recognition of our AMCP students for their many great accomplishments,” says Social and Administrative Sciences Division Associate Professor Kevin Look, faculty advisor to the School’s AMCP chapter. “They have put a lot of time and hard work into learning the nuances of many aspects of pharmacy that are not covered in depth in traditional pharmacy curricula.”

As a pharmacy intern at pharmacy benefit manager Navitus, third-year PharmD student Trey Jones was handed the reins to a project concerning adults with Type-2 diabetes: a campaign of mail-to-prescriber letters for patients who were prescribed duplicative antidiabetic therapies. The letters were designed to get prescribers to reconsider the dual medications and work with their patient to exclusively take one or the other.

“The agents we targeted were GLP-1 receptor agonists and DPP-4 inhibitors, which can be unsafe when used together and are extremely expensive,” says Jones.

Used in combination, the drugs show no additional therapeutic benefit and can cause adverse effects, such as gastrointestinal and hypoglycemic symptoms. Additionally, these medications represent two of the most expensive antidiabetic drug classes, so deprescribing this redundancy would yield significant savings for the patient.

Working with his Navitus preceptors, Marnie Wickizer (PharmD ’03), director of clinical services and residency program director, and Agata Siwak, who also holds a PharmD and is Navitus’ population health pharmacist and residency program coordinator, Jones reviewed the letters, which included a list of claims for the drugs in question, safety risks, and the contact information for prescribers. With his preceptors, Jones also completed the Institutional Review Board submission to allow the project to move forward, wrote the abstract, created the research poster, and presented internally at Navitus.

The letters were sent three times over the 12-month study period, and then Jones helped to analyze data and outcomes from the following four months. They found that the letters led to a 17 percent success rate in deprescribing one of the two medications, as well as a 28 percent savings in patients’ out-of-pocket costs and 22 percent savings for the health plan. Because of the many benefits, Navitus will continue to use these letters in the future.

Jones presented these findings at the 2022 AMCP Annual Meeting and, due to the design, validity, and innovation and his mastery of the topic, he earned the Best Student Poster Award, out of more than 100 student posters and many more research abstract submissions.

“This award reflects the quality of instruction provided to students at the School of Pharmacy,” says Jones, who hopes to work in managed care pharmacy after graduation. “It shows me that I’m a capable student and that my preceptors who worked with me are fantastic.”

Wickizer is proud of Jones’ national achievement and excited for the impact it has had on not only patients but also Jones’ career.

“Importantly, Trey enjoyed the project and learned about himself through the process, as well as getting experience with outcomes research, and ways to construct research projects,” says Wickizer. “Those research experiences are valuable and can sometimes feel few and far between for students.”

In AMCP’s largest competition for student pharmacists, teams from across the country act as experts on a particular medication and develop a presentation about the medication, its alternatives, and what a theoretical health plan would cover for the medication. The competition this year centered around the drug Ponvory, a once-daily pill to treat relapsing forms of multiple sclerosis (MS).

Out of 64 teams and through rounds of local and national competition, the School of Pharmacy’s students reached the top 15 and participated in the semifinals.

“Our student competitors have all demonstrated high levels of initiative, collaboration, and leadership that will help them be successful professionals in non-traditional areas such as managed care, pharmacy benefit managers, industry, and consulting pharmacy,” says Look.

The team — consisting of third-year PharmD students Austin Stark, Emily LaMonte, Taylor Shufelt, and Abbey Woodward — has been competing together in the AMCP P&T competition for three years. This is their first time reaching the semifinal level.

“It was definitely exciting because we had done this competition our first and second years,” says Stark, president of the School’s AMCP chapter. “It was exciting to move beyond the local rounds and being selected for the semifinals was even more exciting.”

The team met over Zoom to coordinate their presentation and combined their research into a 50-page manuscript, summarized in a presentation that was recorded and submitted to the judges.

The team collectively took a drug literature course at the School of Pharmacy in the spring semester of their second year, which Woodward believes contributed to their better performance at the competition this year.

“During our first year of pharmacy school, we hadn’t really developed any therapy knowledge yet,” says Woodward. “We hadn’t done drug literature, so it took us a lot longer to formulate an opinion the first year and even second year too, and then this year, because of our coursework, we were more prepared with how to go about finding the data and formulating a stance on it.”

Shufelt and Woodward both note the growth the team has experienced at the School of Pharmacy, and attribute this to their success at the competition.

“I am so proud of us and how much we have grown over the past couple of years in our clinical skills, ability to review and analyze scientific evidence, and ability to work on a team,” says Shufelt.

Every member of the team is interested in going into ambulatory care after residency. LaMonte feels the School has prepared her well to work in the field and in residency. 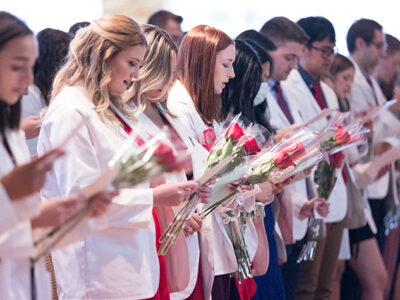 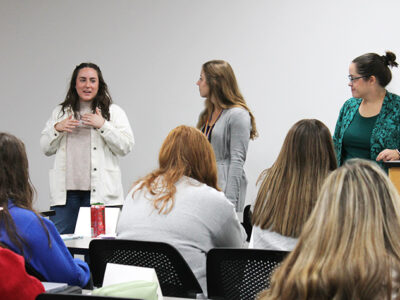