Pharmaceutical Sciences and the New Age of ‘Comfort’ Foods 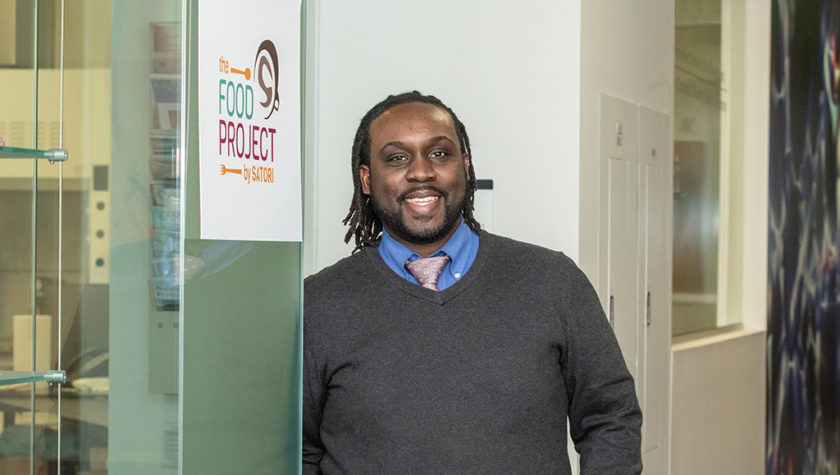 Kwadwo Owusu-Ofori (PhD '10), graduate of the Pharmaceutical Sciences program and founder of the Satori Food Project.

Nearly two-thirds of Americans start their day with a cup of coffee. What if sipping that morning brew could prevent anxiety and help them increase their productivity?

Kwadwo Owusu-Ofori (PhD ’10) has a unique approach to exploring that idea through a combination of his personal and professional experiences in food science and pharmaceutical sciences. In 2016, six years after graduating from the University of Wisconsin–Madison School of Pharmacy, he created the Milwaukee-based startup company Satori Food Project, which makes family-friendly foods that have mental health benefits.

“Anxiety is an illness that transcends socio-economic status, race, education level, gender, and geography—none of these labels seem to matter,” Owusu-Ofori says. “Everyone has to manage stress and anxiety. Everyone.”

Currently, Satori offers a vanilla coffee creamer and a hot chocolate mix fortified with vitamins and minerals that support calm and productive mental states. Satori plans to begin clinical testing of its products next year in hopes of moving one step closer to approval from the U.S. Food and Drug Administration (FDA), with the ultimate goal of giving health care providers a new category of therapeutic options to help patients manage their anxiety and attention-deficit disorders.

Owusu-Ofori has a clear vision for his company and its products, but the career path that led him to where he is now—pharmaceutical scientist, inventor, entrepreneur—wasn’t always so evident. Satori, which is a Zen Buddhist term for an “ah-ha moment,” can refer to Satori’s desired therapeutic effects, or Owusu-Ofori’s own realizations that eventually led to the formation of the Satori Food Project.

From food to pharma

Owusu-Ofori grew up in Greensboro, NC. After earning his bachelor’s degree in biochemistry from North Carolina State University, he worked in a USDA food science lab developing laboratory techniques to analyze the nutritional value of a wide variety of sweet potatoes to evaluate their potential as cash crops in North Carolina. While working on that project, he applied to the Pharmaceutical Sciences PhD program at the UW–Madison School of Pharmacy, and decided to pursue a life-long dream of his—to cure a disease.

“I knew I was eventually going to make a career transition into pharmacy. I’ve always wanted to invent a new type of medicine,” says Owusu-Ofori. “I was inspired by my 7th grade science teacher. Ever since I was 12 years old, I wanted to create a pharmaceutical company.”

For Owusu-Ofori, a second-generation Ghanaian-American, attending UW–Madison is a family tradition.

“In the 1970s the Ghanaian government provided support for its citizens to study at prestigious universities around the world. This was epitomized by the relationship between Ghana and UW–Madison that still exists to this day,” he says. “A lot of Ghanaian immigrants, including my father, and a few of my aunts and uncles, earned their doctorate degrees from UW–Madison. For me, going to graduate school at UW–Madison is kind of a family tradition.”

At the UW–Madison School of Pharmacy, he studied in the research laboratory of Professor William Mellon and his collaborator, Steven Nakada, who was a professor in the UW–Madison Department of Urology. His time in their laboratory is where he learned the resiliency and tenacity that makes scientific discovery possible. “The old saying in scientific research is that only 1 percent of your experiments are actually going to work, so you must keep trying and failing over and over again until you finally reach success,” Owusu-Ofori says. That is a lesson that continues to ring as true for him as a business owner as it did for him as a graduate student.

In the Mellon-Nakada Lab, he identified and evaluated new pain relievers for patients with kidney stone disease. Their team’s goal was to block the gene expression of enzymes that cause pain, instead of blocking the enzyme’s pain-causing activity with drugs like celecoxib and ibuprofen. He found a few promising drug candidates and was very excited to publish his findings, but his academic experience left him wanting more out of his work.

“I started gravitating toward product development and eventually entrepreneurship,” he says. “I wanted to translate some of the wonderful scientific discoveries happening on campus into tangible products for people suffering from an illness.”

After that seed was planted in his mind, the basic elements that eventually bloomed into the Satori Food Project began falling in place. During his final year of graduate school, he had the opportunity to attend the Ghana Biomedical Convention with a travel award from the UW–Madison School of Pharmacy. While in Ghana, he sat in on a presentation that would prove pivotal to shaping his career.

Intrigued by the herbal tea’s ability to increase the potency of an anti-malarial medication, he started kicking around an idea for a powdered fruit drink that could increase the length of time that an over-the-counter pain reliever would stay effective—from hours to days.

“I was strongly urged to write a business plan for my idea and apply for the Kauffman Foundation Global Scholar Program by Ankit Agarwal, who is now the CEO of Imbed Biosciences in Madison. We were postdoctoral scholars together in Charles Czuprynski’s lab at the UW–Madison Food Research Institute.”

The Kauffman Foundation’s Global Scholar Program was a competitive six-month entrepreneurship training program for scientists and engineers from around the world. In addition to a world-class education, the scholars also received seed money to build their products and start their companies.

“A lot of great minds came out of that program,” Owusu-Ofori says. “A fellow scholar, Anna Stork, eventually worked her way to the Shark Tank stage and closed a deal with Mark Cuban!”

Later that year, Owusu-Ofori used the LEAN Startup techniques he learned in the program to create the Anokye Food Company as an umbrella organization for his pharmaceutical research and development projects, including the pain-reliever-amplifying fruit drink. He soon pivoted from developing therapeutics for physical pain to instead targeting psychological pain. In particular, he focused on an issue that plagued him and his classmates in college for a number of years: anxiety.

“Anxiety is a large and diverse category of disorders that includes general anxiety, social anxiety, post-traumatic stress disorders, depression, and obsessive-compulsive disorders. Although they are very treatable, only one out of three people who are clinically diagnosed with an anxiety disorder actively seek treatment,” he says. “But here’s the real problem: Less than half of the people who are prescribed a prescription medication for their anxiety disorder actually respond to their treatment. Now that is a very real problem.”

While working on solutions for anxiety, he received an overwhelming amount of pushback from his classmates over the original versions of Satori, which delivered a blend of vitamins and minerals in pill form. So he asked for suggestions on how they would prefer to consume the therapeutic. People suggested everything from gummy bears, cookies, and chewing gum to coffee creamers, chocolate bars, and breath mints. With these ideas, the Owusu-Ofori was ready to create the Satori Food Project.

“Satori is a pretty cool product developed by the ‘wisdom of the crowd’. As a coffee creamer, it can easily be integrated into a person’s daily routine,” he says. 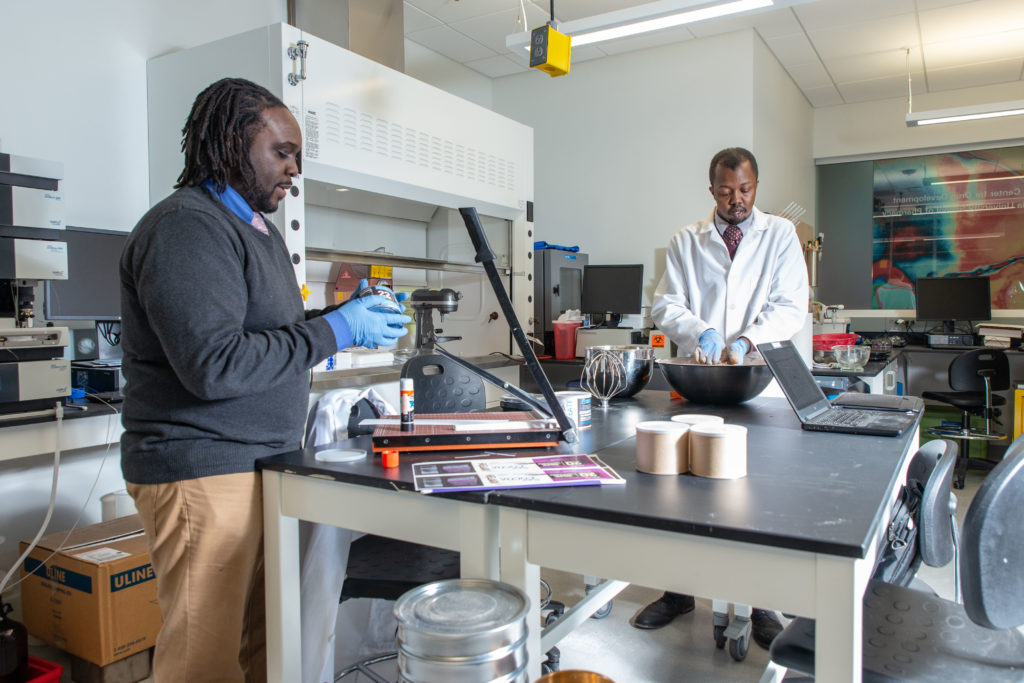 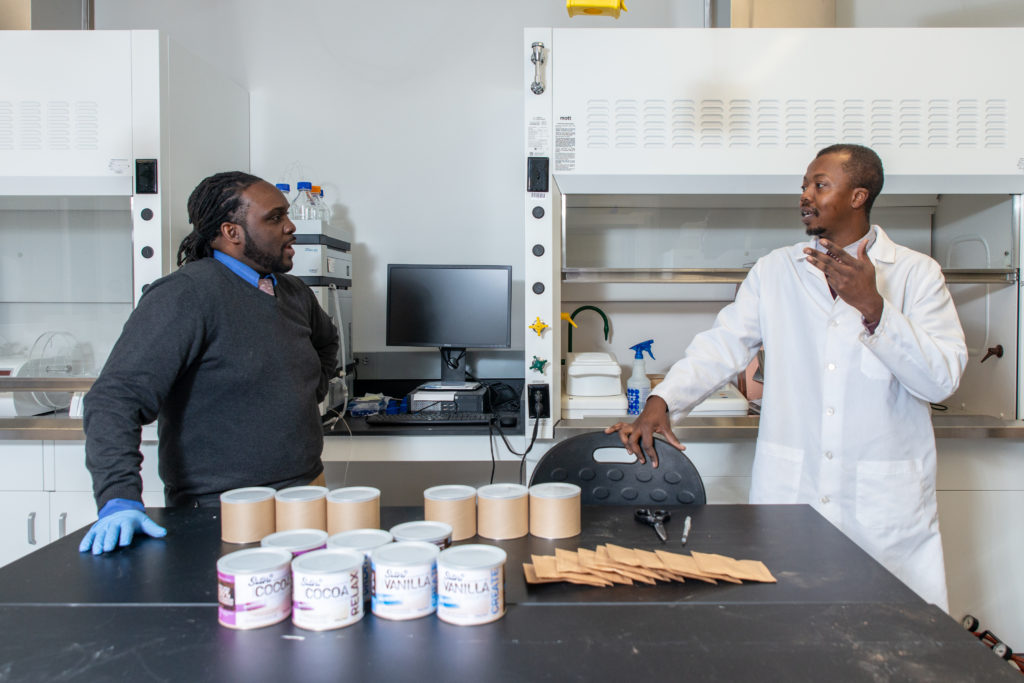 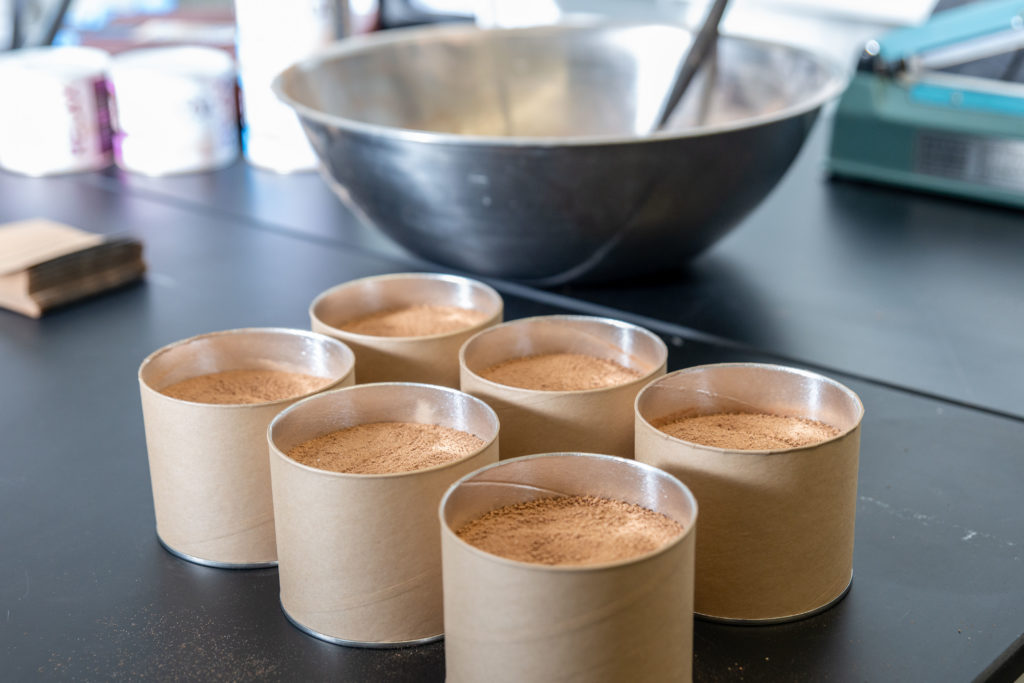 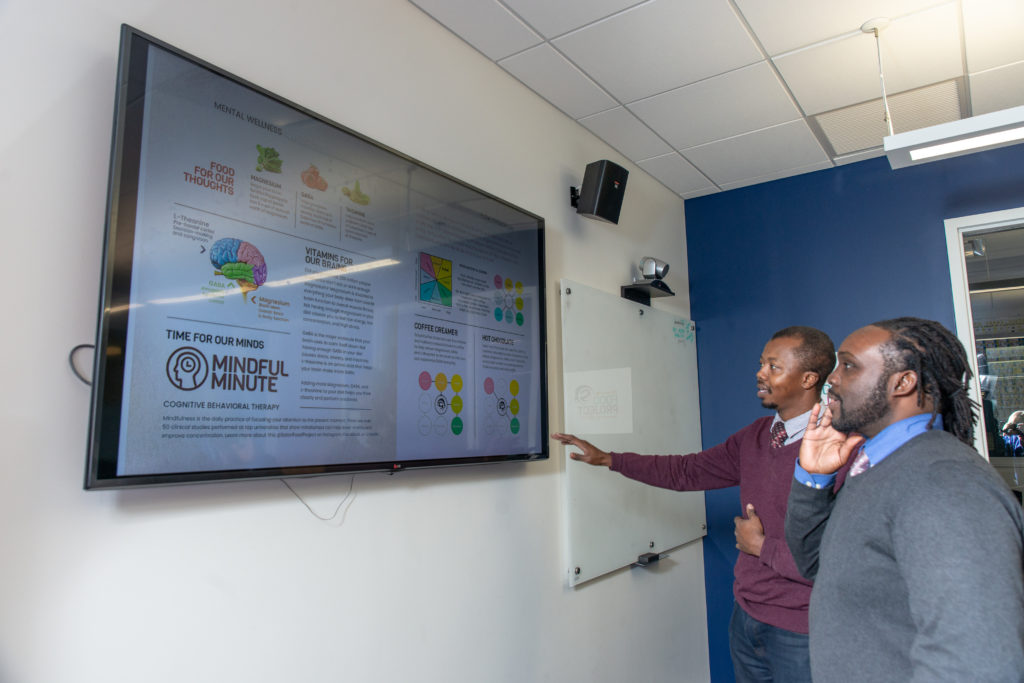 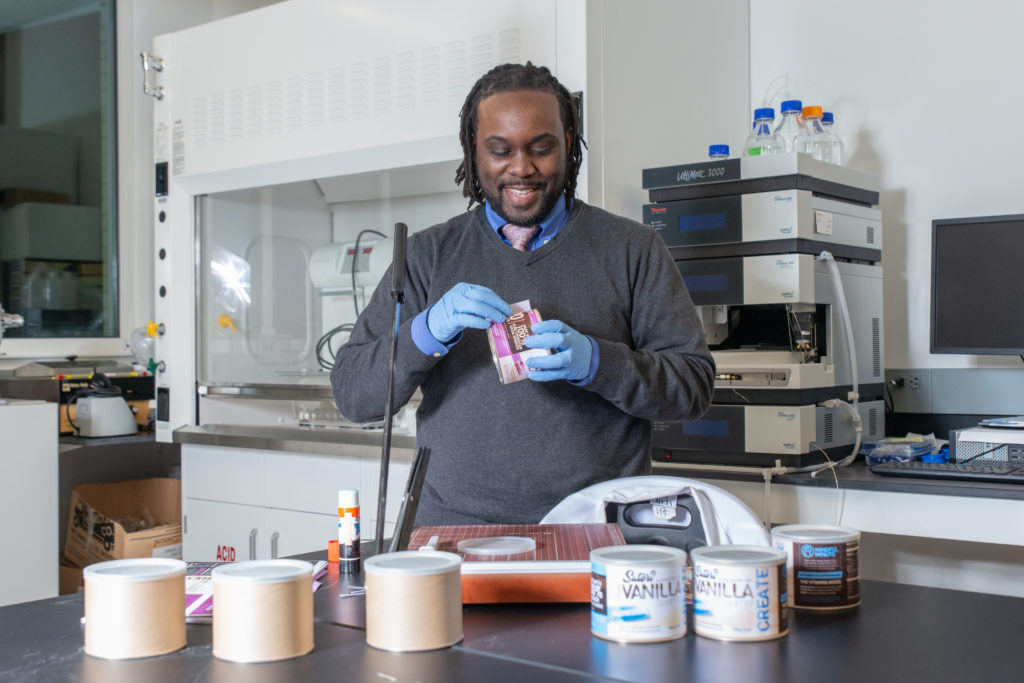 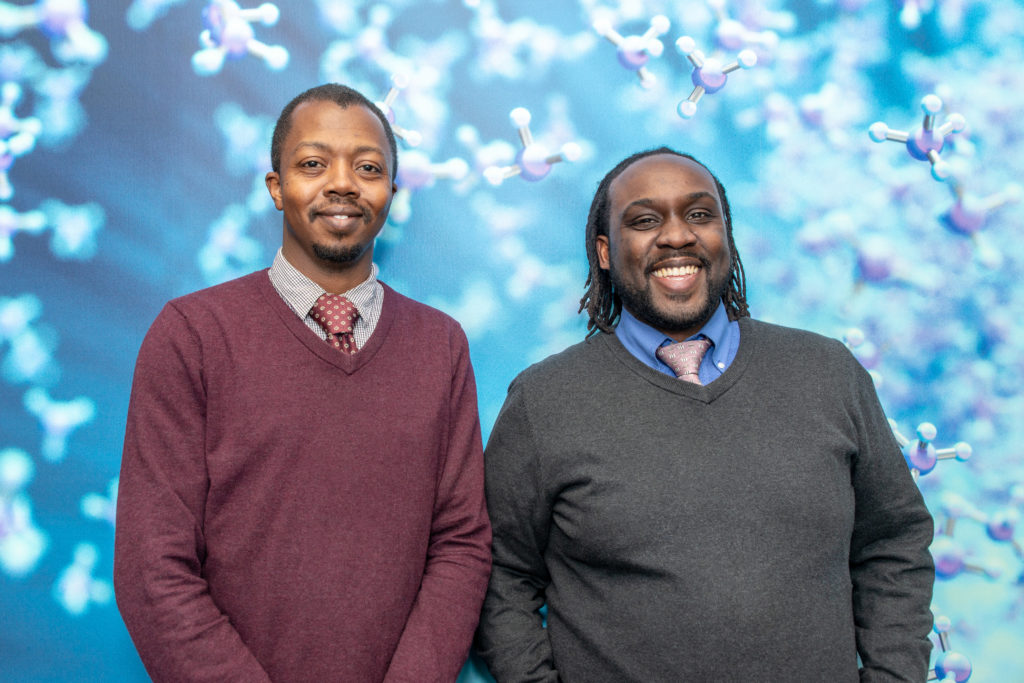 Building the vision of medical foods for mental health

While working with Professor Mellon in the School of Pharmacy, Owusu-Ofori learned an important life lesson that stuck with him throughout his career.

During his days of kidney stone research, he would stretch cultured cells to learn more about how the urinary tract turned pressure into pain. He researched whether an enzyme known to produce pain signals was more active in stretched cells than un-stretched cells. And the only laboratory technique to find his answer that he was comfortable with at the time was a western blot analysis. So he performed a western blot for a phosphorylated version of the enzyme, which usually hints that an enzyme is more active.

“I’ve used that quote for the last 10 years. I am constantly asking myself if I am asking direct questions and performing direct tests to get direct answers to my direct questions,” he says. “I use this thought exercise daily to ensure that my academic and entrepreneurial growth is as direct as possible.”

Satori Food Project has already started growing. In addition to Owusu-Ofori as CEO, Walter Matthews joined the group as the chief product officer and is currently working on a variety of recipes. Terrell Morgan also joined the effort as a branding expert that helps the team communicate the academic research that supports their products.

The company recently completed the gBETA early-stage accelerator program sponsored by the Milwaukee-based Gener8tor Startup Accelerator, and soon afterward completed the I-CORPS program sponsored by the National Science Foundation. They moved into a compounding lab facility at UW–Milwaukee’s Innovation Campus, where they are pilot manufacturing Satori for beta-testing and are excited about what the future holds for the company.

More is brewing in the future for Anokye Food Company, too. Owusu-Ofori plans to revisit his graduate work in the Mellon-Nakada research lab and develop a product that helps people painlessly pass kidney stones with a smooth and refreshing drug delivery mechanism: beer.

Until then, he will continue to pay attention to the growing feedback from those who have benefited from his unique combination of food and pharmaceutical science.

“For a long time I didn’t know if my product development efforts were going to mean anything to anyone but myself,” he says. “I am truly happy and humbled when I hear stories from people who are currently using Satori to manage their struggles with anxiety, long-term concentration, and even insomnia. I think we may have something here. A real solution to a real problem.”

Kwadwo Owusu-Ofori recently visited the School of Pharmacy to speak with about careers in pharmaceutical sciences. Learn more.

Read more about the School’s PhD program in Pharmaceutical Sciences.