Kymberly Ludwig Honored as 2022 IPPE Clinical Instructor of the Year 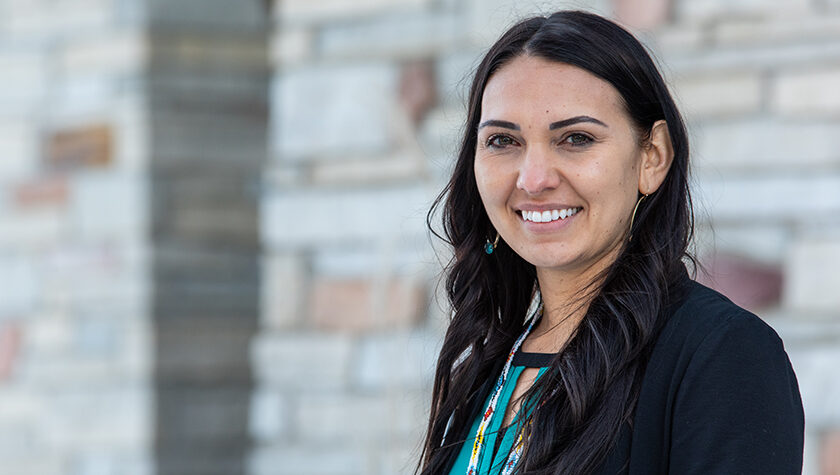 When Kymberly Ludwig (PharmD ‘19) became a clinical staff pharmacist at the Oneida Community Health Center in April 2021, the position came with a precepting opportunity. The previous preceptor, who had mentored Ludwig, was ready to hand her precepting duties to a newer staff member.

“She was humble and energetic and inspiring to me when I was younger,” says Ludwig. “When I got hired on, the manager at my facility asked me if I’d like to take on that preceptor role as a newer pharmacist and I was excited about the opportunity.”

Since then, Ludwig has been precepting the School of Pharmacy’s PharmD students during their Introductory Pharmacy Practice Experience (IPPE) rotations, or clinical rotations during their first three years of pharmacy school.

“I like pharmacy practice and academia, and precepting was an opportunity to throw teaching into my workday. I’ve really enjoyed it,” says Ludwig.

“I’m so new in my career, it’s even more special to me to know that students are already having wonderful experiences in our pharmacy.”
—Kymberly Ludwig

During her PGY-1 residency program with the Indian Health Service at the Phoenix Indian Medical Center, she completed a precepting rotation, so she felt prepared to take on the task. In addition to her PharmD degree from the University of Wisconsin–Madison School of Pharmacy, Ludwig holds a Master of Public Health with a certificate in American Indian Studies from North Dakota State University and a bachelor of science degree from UW–Stout. She is currently working on her board certification in pharmacotherapy.

Her passion for teaching and lifelong learning is palpable, earning Ludwig the UW–Madison School of Pharmacy’s student-nominated 2022 IPPE Clinical Instructor of the Year award.

“I feel humbled, as a newer pharmacist in practice, to be recognized by students,” she says. “I’m so new in my career, it’s even more special to me to know that students are already having wonderful experiences in our pharmacy.”

The Oneida Community Health Center is located near Green Bay and is among a small number of health clinics providing affordable care and medications for members of the Oneida Nation. Growing up, Ludwig and her three siblings made the one-hour trip to the clinic, their closest tribal healthcare center, a few times a year, and she always planned to return to her community as a pharmacist.

“I was inspired to be a pharmacist by the outgoing personalities and positivity of the pharmacists at my childhood hospital, 50 miles north of Green Bay,” Ludwig says. “That stuck with me, and I thought, ‘I want to do this, too.’”

The Oneida Community Health Center is under the umbrella of Indian Health Services, which assists many tribal clinics and hospitals across the nation. The Oneida Nation is a sovereign nation and the tribal health center serves its members, and patients must prove their Native American and/or Alaskan Native lineage to receive treatment.

Pharmacists at the Health Center rotate stations and focus on one task at a time, whether it’s counseling patients, answering calls, or making recommendations to providers. Ludwig says this unique practice environment provides value to pharmacy students.

“Our pharmacy provides the opportunity to home in on education points, and our staff is friendly and welcoming to students and happy to step in to help,” Ludwig says. “We all want them to have a valuable learning experience.”

The Oneida Community Health Center has already hosted first, second, and third-year IPPE students, and this year, the Health Center hosted its first fourth-year student pharmacist on an Advanced Pharmacy Practice Experience (APPE) rotation. To accommodate students who are both just beginning pharmacy school as well as those who are more advanced in the PharmD curriculum, Ludwig adjusts her precepting approach, although her style is similar for everyone — “gentle,” as she describes.

Ludwig asks questions of her students to gauge their knowledge and provides the details and clinical information they need to be able to do consultations properly. She talks students through her thought process as she goes through each step of filling a prescription. She focuses on safety and encourages students to take the time they need to provide that for each patient.

“I can see their happiness and willingness to learn, and that really motivates me as a preceptor.”
—Kymberly Ludwig

“It’s special to me, working at the Oneida clinic and serving that patient population,” Ludwig explains. “I’m Native American, part of the Keweenaw Bay Indian Community (Lake Superior Band of Chippewa), and every time I fill a prescription, I treat it as if the patient is my own family member, paying attention to possible drug interactions and appropriate pharmacotherapy.”

Ludwig wants to be sure students feel comfortable, confident, and not worried if they don’t know something. She loves seeing students smile when they have an “Aha!” moment or do something they’ve never done before, like taking the first transfer of a patient’s medication over the phone, receiving a new prescription from a doctor, or walking a patient through their first use of a medication.

“I want them to feel like they have a safe learning environment and can express themselves when they have questions,” she says. “I can see their happiness and willingness to learn, and that really motivates me as a preceptor.”

By modeling her process to students, Ludwig aims to encourage their verbal communication and says the School of Pharmacy IPPE students she’s precepted thus far have risen to the challenge. Ludwig’s practice setting provides opportunities to counsel patients and interact with health care providers, and Ludwig supports PharmD students as they learn to do both.

Ludwig includes students in conversations with health care providers to make recommendations for certain pharmacotherapeutic treatments for patients. That’s easy to practice at the Oneida clinic, where pharmacists work in the outpatient clinic and can walk to the back of the clinic and knock on a provider’s door with questions or recommendations.

“Our providers are super nice, and when I tell them a student is coming in, they’re friendly and receptive,” says Ludwig. “I let students walk through a drug recommendation with a provider and encourage them to use their knowledge when they feel something isn’t safe. We also focus on cost-effective medications and make recommendations to providers about what insurance will cover.”

During her PharmD program, Ludwig was active with the Native American Center for Health Professions (NACHP), located within the University of Wisconsin School of Medicine and Public Health, which is dedicated to improving the health and wellness of Native Americans.

“NACHP Assistant Director Melissa Metoxen really helped me throughout pharmacy school,” says Ludwig. “The NACHP was a center of resources and companionship. There are not a lot of Native American pharmacists, so I was really grateful to have that mentorship.”

Valuing that experience, Ludwig in turn mentored other Native American PharmD students during their time at the School of Pharmacy, such as Jenny Van Order (PharmD ’20) and Sara Taylor (PharmD ’21), whom she met through NACHP, and she now serves on the NACHP Advisory Council. Those experiences of receiving and providing helpful mentorship continue to inform Ludwig’s ethos.

“I can walk students through the pharmacy school experience and share advice about how to apply for residency, prepare for interviews, and study for the board exam,” says Ludwig. “It’s nice to have someone who can give you advice and help with decision making. That motivates me to give back to students.” 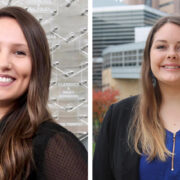 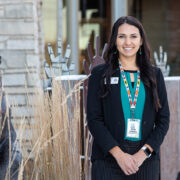 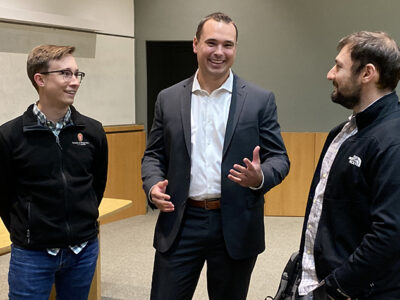