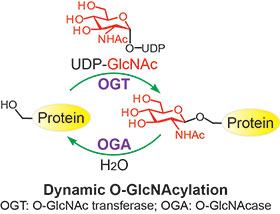 Our research interests span the gap between biology and chemistry. We are intrigued by the roles of protein post-translational modifications in regulating human physiological and pathological processes. We focus on a unique type of protein glycosylation, termed O-linked β-N-acetylglucosamine (O-GlcNAc), which has been found on thousands of human proteins. This modification resembles protein phosphorylation and dynamically regulates various biological processes, such as signal transduction and gene expression. The dynamic O-GlcNAc cycling is controlled by a single pair of enzymes: O-GlcNAc transferase (OGT) that installs O-GlcNAc on serine and threonine residues, and O-GlcNAcase (OGA) that specifically hydrolyzes this modification. Aberrant O-GlcNAcylation has been detected in many diseases including cancer, diabetes, and Alzheimer’s disease. Despite its significance, it is extraordinarily challenging to decipher the functional role of O-GlcNAcylation on individual protein substrates, as there is no efficient method that can modulate O-GlcNAc level in a substrate-specific manner. Moreover, it is unclear how OGT and OGA recognize thousands of protein substrates without an apparent sequence motif. We have applied interdisciplinary approaches including chemical biology, structural biology, cell biology, biochemistry, proteomics, microscopy, and other tools to investigate the substrate recognition and functional regulation of OGT and OGA. The knowledge obtained from these studies will guide future design of substrate-specific probes to dissect the functions of O-GlcNAcylation and will facilitate the discovery of new drug targets and molecules that may have therapeutic utilities.

As OGA aberrant function has been linked to many diseases, there is a widespread interest in understanding how OGA’s catalytic activity and substrate specificity is regulated.

We determined the X-ray structure of a human OGA, representing the first model of eukaryotic enzymes in the glycoside hydrolase 84 (GH84) family. In stark contrast to previously solved bacterial homologues, we found that human OGA forms an unusual dimeric structure, creating a potential substrate-binding cleft. We next determined the X-ray structures of OGA complexed to five distinct glycopeptide substrates and showed that all of these glycopeptides are bound in the substrate-binding cleft. We are actively investigating how human OGA recognizes and processes diverse O-GlcNAcylated protein substrates to further advance the understanding of OGA’s substrate specificity. We are also interested in understanding how OGA’s function is regulated and becomes aberrant in diseases. 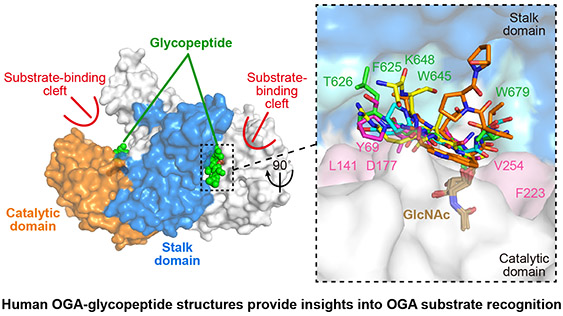 OGT is an essential regulatory glycosyltransferase. However, the lack of complete structural information for OGT with bound protein substrate, and the paucity of efficient methods for characterizing OGT-substrate recognition has hindered the investigation of OGT substrate specificity.

We developed a class of chemical probes (called GlcNAc Electrophilic Probes or GEPs) that can rapidly discriminate altered OGT binding affinity to sugar donor from protein acceptor substrate by generating varied levels of modification on a unique active site cysteine of OGT and the protein substrate. Both of these can be easily detected using a click-chemistry-based fluorescent assay. These probes are expected to accelerate the characterization of structural features of OGT that contribute to substrate binding and recognition. Moreover, we developed a GEP that can crosslink OGT with protein substrates in situ during the sugar transfer step, affording a unique strategy to enrich and identify genuine substrates that transiently or weakly interact with OGT. We are currently optimizing these probes and developing new tools to characterize the substrate specificity and biological role of OGT. 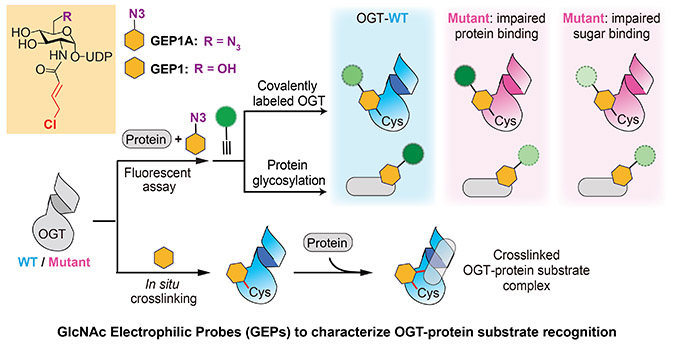 Nutrient regulation of transcription by O-GlcNAcylation in health and disease

O-GlcNAcylation is dynamic and inducible in response to the nutrient and metabolic status of the cell, endowing it with the unique property of acting as a nutrient sensor to regulate cellular functions. A majority of O-GlcNAcylated proteins participate in transcription, including RNA polymerase II (Pol II), histones, and nearly every Pol II transcription factor. The role of O-GlcNAc on the central machinery of transcription, Pol II, remains largely unclear and the regulation of gene expression by nutrients (e.g., glucose) is poorly understood.

Our research aims to uncover a new mechanism linking nutrients to Pol II-regulated gene expression. We discovered that the O-GlcNAcylation of Pol II was only located on the C-terminal domain (CTD), which consists of 52 peptide repeats with over 200 potential glycosylation sites. We established that approximately 20 residues of O-GlcNAc were added to the CTD via a distributive mechanism (only one glycosylation occurs during a single enzyme-substrate binding event). We further showed that OGA also utilized a distributive mechanism to remove O-GlcNAc from the glycosylated CTD. Compared to a processive mechanism, which usually includes one major rate-limiting event, forming the enzyme-substrate complex, a distributive mechanism relying on multiple binding events would be a more efficient response to acute stimuli and is better for fine control. We are investigating how O-GlcNAcylated Pol II regulates transcription in response to nutrients. In addition, we are interested in understanding the molecular basis of how aberrant O-GlcNAcylation impacts crosstalk with other types of protein post-translational modifications in cancer development.