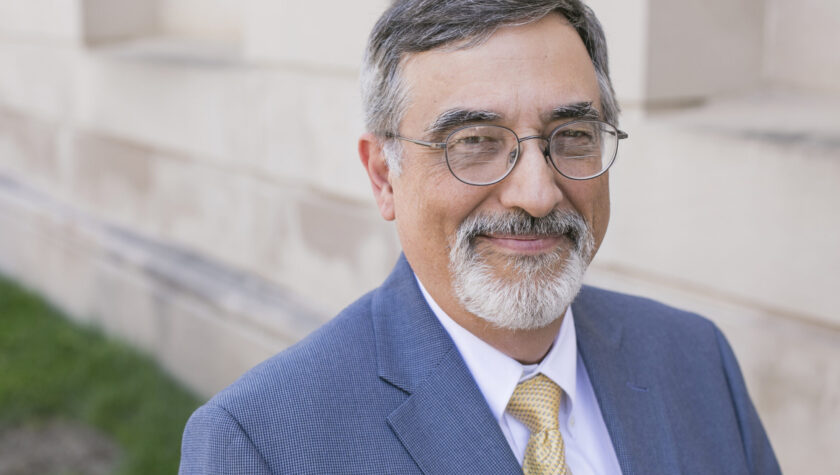 Position recognizes a lifetime of accomplishments, contributions to the field of pharmacy

Renowned pharmaceutical historian and senior lecturer at the University of Wisconsin–Madison School of Pharmacy Gregory Higby (MS ’80, PhD ’84) has been elected Honorary President of the American Pharmacists Association (APhA) for 2021–2022, a position honoring individuals who have contributed significantly to the organization and the field of pharmacy.

“I was very surprised by this honor,” says Higby, who has been on the APhA House of Delegates since 1986 and a member of the association for four decades. “It’s a big deal for me. I wish my father were still alive to see this. He was a pharmacist as well, so I think it would have meant a lot to him.”

Higby likened the role with APhA, for which he will be honored at the annual APhA meeting in 2021, more to a lifetime achievement award than a job. As honorary president, he’s excited to participate in a meeting of the APhA Board of Trustees and contribute historical context to the history of provider status.

”Dr. Higby has made significant contributions to APhA and is a frequent contributor to efforts to tell the story of the profession in America.”
—American Pharmacists Association

Higby said his nomination to the position came as a surprise. When he answered a call from Thomas Menighan, chief executive officer of APhA, he was expecting Menighan to ask him about serving on a committee, since he’s served on several APhA committees in the past. Instead, Menighan told him he’d gotten the honorary presidency.

“I’ve received several recognitions over my career,” Higby said. “But this is one of the most significant for me because it’s a profession-wide recognition.”

Higby is currently the Fischelis Scholar, a senior curator position with the American Institute of the History of Pharmacy (AIHP), housed within the UW–Madison School of Pharmacy, where he served as executive director for more than 30 years. He also continues to teach a course in the history of pharmacy at the School, as he’s done since 1984.

Throughout this long and prolific career, he has published and edited more than 70 books, articles, essays, and other works advancing the field of the history of pharmacy, including serving as editor of AIHP’s Pharmacy in History journal for more than 100 editions.

The honorary presidency is the latest award in a much-lauded career. He’s an elected member of the International Academy of the History of Pharmacy, earned AIHP’s Edward Kremers award for pharmaco-historical writing in 1995, and received the Schelenz Medal from the German Society for the History of Pharmacy. In 2019, he received two more prestigious honors: the A. A. Parmentier Medal from the Société D’Histoire de la Pharmacie and the George Urdang Medal from AIHP.

“Dr. Higby has made significant contributions to APhA and is a frequent contributor to efforts to tell the story of the profession in America. Always generous with his time, Dr. Higby has been a resource to countless pharmacists and faculty from APhA members to international historians,” says the APhA committee that selected Higby for the nomination. “Dr. Higby’s character is perfectly aligned with the norms expected of someone considered for the distinction of Honorary President of APhA.”

APhA’s Honorary President position dates back to 1907, and Higby isn’t the first School of Pharmacy alum to take on the role. Edward Kremers — the second director of the University of Wisconsin’s Department of Pharmacy, who introduced the world to the four-year degree in pharmacy — earned the position in 1933. In 1960, Oscar Rennebohm (Certificate in Pharmacy 1911), the namesake of Rennebohm Hall, held the office, as did former professors Glenn Sonnedecker (MS ’50, PhD ’53) in 1985 and August Lemberger (BS ’48, PhD ’52) in 1996.

Higby says he’s proud to be a part of this strong legacy of the School of Pharmacy and that the APhA’s recognition of his accomplishments isn’t just a win for him, but for his field.

“It’s exciting,” Higby said. “I appreciate the recognition for myself and also for the history of pharmacy as a field, where all of my contributions have been.”