Grandson learns about his grandfather—a 1907 alumnus 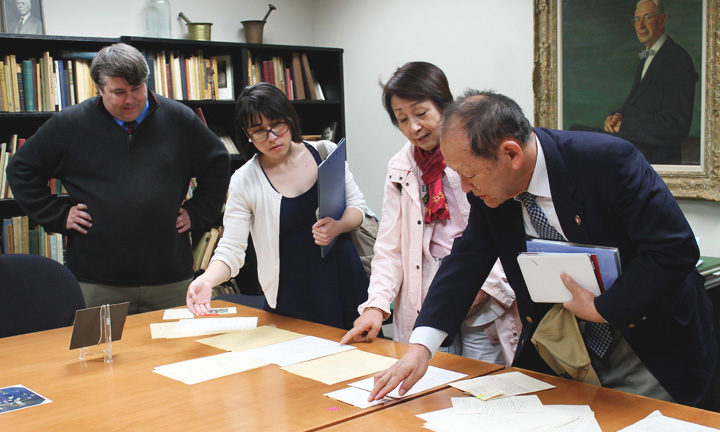 On Thursday, June 1, 2017, Satoru Inoue and his wife came to the University of Wisconsin-Madison School of Pharmacy to visit the alma mater of his grandfather, Naojiro Inoue, who received his Master of Pharmacy degree in 1907. Naojiro Inoue (sometimes spelled as Inouye) was one of the first Japanese students to earn a pharmacy degree from the University of Wisconsin, and his grandson had the opportunity to examine biographical material about his grandfather from the Kremers Reference Files maintained by the American Institute of the History of Pharmacy. In addition to a 1906 group photograph of pharmacy students that featured Inoue, the preserved historical items included correspondence between Inoue and Edward Kremers, the Director of the School of Pharmacy in the early twentieth century. The letters discussed Inoue’s course of study at the University of Wisconsin and provided updates on the progress of his thesis about Japanese Peppermint. After Inoue’s graduation in 1907, he lived for a time in San Francisco before returning to Japan by the 1930s. Kremers and Inoue continued to exchange letters until 1939, shortly before Inoue’s death in about 1943.