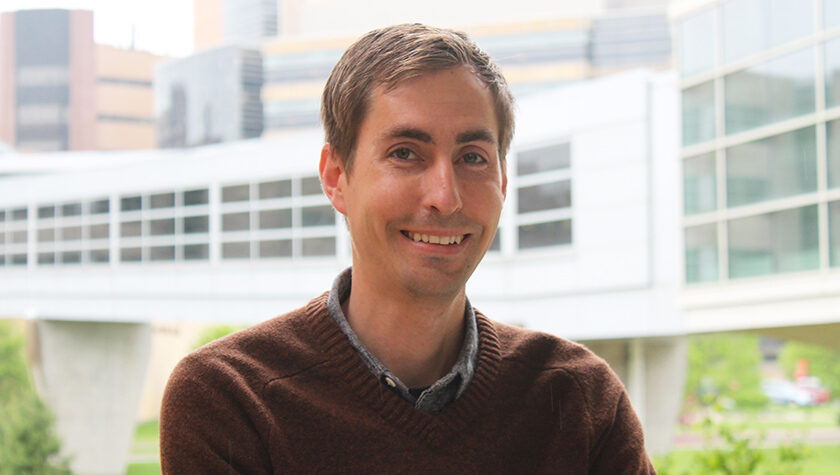 For decades, clinical trials with psychedelic-assisted psychotherapy have been gaining momentum and accumulating evidence supporting psychedelics as potential treatments for several prevalent mental health conditions. One study, for example, saw immediate relief of depression symptoms following ketamine therapy in 40 percent of patients who had not had success with other antidepressants. In another, among participants who reported at least seven years of problematic alcohol use, 83 percent no longer met the criteria for alcohol use disorder after undergoing psychedelic therapy.

However, the demographics of participants in current clinical trials are significantly whiter than the average population across the United States, despite long-term mandates established by the National Institutes of Health Revitalization Act of 1993 requiring clinical research to include minority populations.

In collaboration with two co-investigators from the School of Pharmacy — Professor Paul Hutson and Associate Professor Olayinka Shiyanbola — Wenthur is leading a new two-year study, funded by a grant from the Wisconsin Alumni Research Foundation (WARF), to increase representation in clinical studies.

In one arm of the study, Wenthur is exploring the influence of the clinical space’s art on the recruitment and retention of minority populations in psychedelic studies. In the other, he’s connecting with diverse groups of community members to gain a nuanced understanding of the barriers to the enrollment of non-white study participants. With this understanding, researchers nationwide can design their studies and clinical trials to be equitable and attract a greater diversity of participants, leading to more effective therapies available to more patients.

So what does art have to do with equity and inclusion in research? The setting in which psychedelic treatment occurs and the mindset the person is bringing into the session have long been proposed to be a mediator of the therapeutic effect. According to Wenthur, objects in your environment that may be mundane in your everyday life can take on special significance during the use of these compounds.

Participants in psychedelic studies often bring personally meaningful objects into the sessions, which is not achievable for all participants, particularly for those experiencing housing insecurity and homelessness. If people are unable to bring their own items or find the décor in the treatment room alienating, it may hinder their experience and results or their willingness to participate.

Through Wenthur’s study, participants in ongoing psychedelic therapy studies connected with UW–Madison will engage in an art selection process through use of UW–Madison’s digital collections. They will have the opportunity to browse through a catalog and select artwork they find to be meaningful prior to their first session, which will then appear on a digital display in the room.

Though the impact of music has been studied in this context, artwork in psychedelic study room settings has never been systematically researched until now.

“We are starting with artwork as a tractable way to address one variable in the study setting,” Wenthur says. “By providing the opportunity to tailor the setting to what an individual finds most therapeutically beneficial or feels most comfortable to them, we can potentially maximize the benefit of the therapy.”

Earlier this year, Wenthur also began holding focus groups to scrutinize how responses to artwork in study facilities may differ depending on self-identity and across racial, ethnic, gender and age dimensions.

Shiyanbola, of the School’s Social and Administrative Sciences Division, has a breadth of experience in qualitative research and is bringing methodological expertise and an equity lens to this segment of the research. She has helped Wenthur develop questions and techniques to be used in the focus groups that will yield diverse perspectives and valuable data.

“I’ve been helping the team analyze how to employ a health equity framework to the qualitative work they’ll be doing,” she says. “Psychedelics are not anywhere near my ‘normal’ content area, but being involved in this research is a way for me to think about health equity in a new way and help reduce under-representation.”

With Shiyanbola’s assistance, Wenthur successfully completed the first focus group with the Madison Psychedelics Society earlier this year. The participants shared a common interest in psychedelic experiences and discussed the history and culture surrounding the science of psychedelics, helping Wenthur understand local attitudes and potential hurdles to reversing trends of minority underrepresentation.

Next, Wenthur will expand geographically across other regions of the country to hear from different demographic populations with varying relationships with psychedelics and disparate ideas about the therapeutic application of these compounds.

Wenthur anticipates these interactions with community members will help improve not only oral communications from researcher to subject, but also improve written language in study protocols to ensure they are understandable and accessible to subjects from diverse backgrounds. Plus, the focus groups could spotlight issues like lack of transportation or childcare that could be barriers to enrollment, as study participants often have to stay on-site for 10 to 12 hours.

All individuals involved in running the study will complete UW–Madison’s validated training programs to improve cultural humility, understanding, and context in healthcare, as well as other educational programs addressing barriers to the representation of minorities in psychedelic clinic trials.

“As ‘illegal’ Schedule I compounds are now entering clinical trials as investigational drugs, we have to recognize that there is a social dynamic to the use of these substances and that certain demographic groups have been the recipients of more legal scrutiny related to substance use than the majority of the population,” Wenthur says. “That is one barrier to getting a representative population to enroll, complete, and benefit from these clinical trials.”

“Indigenous cultures have long been the stewards of this type of knowledge and their practices are foundational to a lot of the protocols of current clinical trials.”
—Cody Wenthur

In addition to focus groups directed toward Black and Latinx populations, Wenthur is also targeting the underrepresentation of Indigenous communities, who have long used psychoactive plants for emotional, physical, and spiritual healing — even to combat alcoholism and mental health problems — with tribes native to the U.S. primarily using peyote while tribes in South America have worked with other plants like ayahuasca and San Pedro. Modern clinical trials have also borrowed best practices from Indigenous groups, such as the presence of a trained guide to stay with the patient throughout treatment.

“Indigenous cultures have long been the stewards of this type of knowledge and their practices are foundational to a lot of the protocols of current clinical trials,” he says. “Yet, they are underrepresented in these very same trials and are at risk of not seeing the benefits from the legitimization of the medical use model for these compounds.”

As the director of the School’s new master’s degree program in Psychoactive Pharmaceutical Investigation and executive board member for the new Transdisciplinary Center for Research in Psychoactive Substances, Wenthur is a respected expert in the field of psychedelic medicine.

In addition to this study to increase diversity and equity in the field, Wenthur is also working on several other groundbreaking projects, including contributions to a team-based clinical study to see if the memory for the psychedelic experience is necessary to gain any therapeutic effects from psilocybin and leading a mechanistic, pre-clinical project to develop safer and more effective antidepressants from ketamine. Wenthur hopes this study will enable the scientific community to develop a quantifiable method to address individual participant fit to research settings, which would strengthen his own re-search and that of his peers.

“It is vitally important and closing health equity gaps must be a priority if we want to effectively address the heavy burden of mental health disorders present in America right now.”
—Cody Wenthur

“If we can do that, there is a potential path forward to harmonizing data across multiple trials, which is ultimately important because large-scale clinical trials with representative data are the foundation upon which drugs can be approved for safety and efficacy,” Wenthur says. “If the data continues to look as promising as it currently does for psychedelic-assisted psychotherapies, that approval is the critical step toward giving people the opportunity to access these medications.”

Wenthur hopes to see researchers across the country implement similar interventions and place a needed emphasis on diversity, equity, and inclusion in their outreach efforts to potential participants.

“This work needs to be done,” Wenthur says. “It is vitally important and closing health equity gaps must be a priority if we want to effectively address the heavy burden of mental health disorders present in America right now.”