Breaking Down the Biology of the Brain’s Natural Barriers 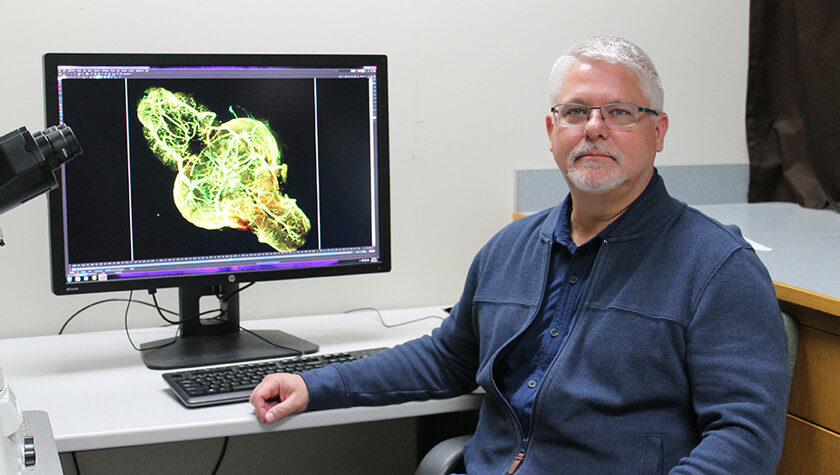 Sitting at his microscope, flipping through a series of brightly colored images on the computer, Michael Taylor sounds as excited as a kid showing off a prized collection of trading cards.

His excitement is understandable: The images on the screen reveal the development of one of the brain’s main protective structures, the blood-brain barrier, depicting its growth and function over time in three dimensions — all in a whole, living zebrafish.

“When I first started doing imaging, I started realizing all the things I can do by visualizing something like this in a live animal — things that I never really had considered before,” says Taylor. Now, as an assistant professor in the Drug Delivery Core of the Pharmaceutical Sciences Division at the University of Wisconsin–Madison School of Pharmacy, he applies his imaging prowess to studying the development and function of the unique characteristics of brain blood vessels and the roles they play in preventing and treating diseases in the brain.

Blood vessels in the brain differ from those elsewhere in the body. While those throughout the muscles and many organs contain pores or gaps that facilitate the transfer of nutrients and waste materials between the blood and body tissues, blood vessels in the brain are lined by tightly adjoined cells that prevent the free flow of molecules into or out of the brain. They are instead studded with transport proteins specially designed to ferry specific molecules — such as glucose — across the boundary.

The result is the blood-brain barrier, which largely isolates the brain from the body’s blood supply. It serves a critical protective role, keeping immune cells, toxins and other threats out of sensitive brain tissue. But that barrier poses challenges when the brain is sick. Most pharmaceuticals cannot cross it, making it difficult to treat brain conditions. And dysregulation of the barrier itself during diseases can leave the brain vulnerable.

“The blood-brain barrier plays a really important role in almost every disease in the central nervous system, either because you can’t deliver drugs to the brain at an effective concentration or because, as in many cases, the blood-brain barrier breaks down and is no longer functional, which contributes to the pathology of that particular disease,” Taylor says. “It can be cause or effect. Knowing how it forms, we can potentially fix a damaged barrier, or identify ways to get drugs into the brain at a more effective concentration.”

Now Taylor is using zebrafish to explore the basic biology of what makes the endothelial cells that line brain blood vessels so different from those in the rest of the body, and how those properties may help researchers devise more effective approaches to treat conditions in the brain.

Zebrafish, a black-and-white striped fish common in home aquariums, provide many advantages for this type of work. They’re small, easy to raise, and lend themselves well to genetic tweaks, both for blocking known genes to look for effects and for seeking out unidentified genes responsible for specific physiological processes. What’s more, the fish are transparent for the first few days of life, allowing researchers to watch development processes unfold in a live vertebrate animal.

These properties make the small fish ideal for imaging-based studies. Taylor’s group has engineered several lines of fish to produce fluorescent markers that tag specific proteins or label certain populations of cells. In one of these transgenic lines, for example, a protein specific to brain endothelial cells is tagged with a dye that fluoresces red, making the full blood-brain barrier glow red in microscope images. (In 2012, he and a colleague won a prestigious scientific imaging competition with an image of the developing blood-brain barrier.) In another, a marker lights up the cell bodies of all the neurons. In yet another, inflammation-causing cells shine green, allowing Taylor to see exactly where and when these potentially dangerous cells, normally barred from the brain, infiltrate the barrier.

Central to his success in this area is a well-equipped microscope facility in his Rennebohm Hall lab, including a powerful confocal microscope with resonance scanner technology able to image rapidly through a large depth of tissue. With this setup, Taylor can collect a series of high-resolution fluorescent microscope images at multiple depths through relatively thick structures, such as the whole head and brain of a living zebrafish larva. Taken at rapid time intervals, these images can capture even dynamic processes such as cell movement. Later, he will stack the images from each time point, then combine them into a time-lapse movie. “We can watch all this development take place in a live animal in real time,” he says.

Multi-dimensional images and movies capture a level of information that can be hard to convey with words, Taylor says. “I think it makes research so much more accessible when people can see it,” he says. “You can say ‘neutrophil infiltration of the brain’ and count cells and make a bar graph, but it’s just not the same thing as actually watching it happen.”

From development to disease

He’s using these tools to screen collections of zebrafish genetic mutants to identify fish with defects in the development of the brain endothelial cells. This process allows him to home in on specific genes involved in blood-brain barrier formation. “We know there are cues within the brain microenvironment that cause these endothelial cells to adopt this barrier phenotype. We’re just now beginning to understand what those things are,” he explains.

In one recent paper, his group was able to show the growth and development of brain blood vessels — a process called angiogenesis — and formation of the blood-brain barrier occur simultaneously. Previously, it was thought to be a two-step process, he says. But with their transgenic lines, they can visualize the growing vessels and see the endothelial cells adopt barrier properties.

In another collaboration, with UW–Madison pediatrics Professor Anna Huttenlocher, Taylor and Assistant Scientist Kevin Lanham have created a zebrafish model of neuroinflammation. Normally, the blood-brain barrier blocks immune cells from the rest of the body from entering the brain. But conditions such as injury or infection can release signals from neurons into the bloodstream, where they activate the immune system and recruit immune cells across the blood-brain barrier.

Once in the brain, the immune cells trigger inflammatory responses that can cause brain swelling, damage or even cell death. With the zebrafish model, the Taylor Lab can visualize the immune cells getting across the blood-brain barrier and into the brain. They are now working to identify genes involved in the process and screen for molecules that can block neuroinflammation and its consequences.

“There are many steps along this whole process that we can now genetically tease apart,” Taylor says. “You can imagine any of these as new drug targets to block the neuroinflammatory response.”

Taylor also wants to help other researchers unlock the beauty and power of imaging. He offers microscopy services and access, as well as training for other School of Pharmacy scientists to use the equipment effectively.

Being able to watch biological processes unspool helps place scientific details within the context of the full organism, Taylor says. Time-lapse imaging in particular can reveal interactions that he would not see otherwise.

“This is where it’s really fun, to be able to take images like this and play around with them and make something beautiful,” he says. “It’s science as an art, and art that drives the science, in a way.”