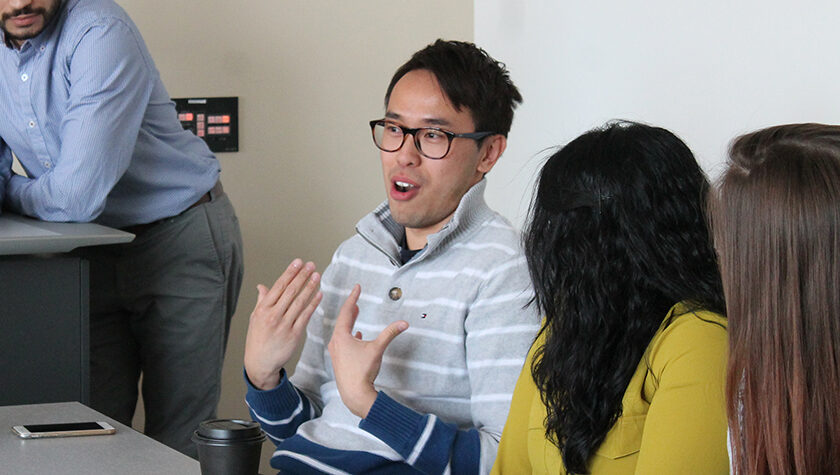 Yu Tong (Tony) Tam (PhD '18) speaking on a student panel at the School of Pharmacy.

Transitioning from learning-oriented research in academia into the buzzing, dynamic, team-oriented world of industry can be overwhelming. But for Yu Tong (Tony) Tam (PhD ‘18), armed with his collaborative experiences from the University of Wisconsin–Madison School of Pharmacy, the transition turned out to be quite smooth.

Today, he’s applied that solid research foundation to become an associate principal scientist at Merck & Co., Inc., where he supports strategies for drug discovery and delivery programs and works to develop groundbreaking therapeutics.

As a graduate student at the School, Tam was a productive member of the Kwon Lab and co-authored a number of papers with different faculty members, such as Professor Paul Marker, chair of the Pharmaceutical Sciences Division.

One of his chief achievements while at the School was to develop a stabilized form of a common chemotherapy agent entrained within a nanocarrier. Their research found that the new method prolonged drug release and inhibited tumor growth in animal models of human lung cancer, and the research was published in the prestigious ACS Nano journal. This early experience set him up to succeed in his current responsibilities at Merck.

“One of the most exciting projects I’m working on is an opportunity to bring an early-discovery molecule all the way to humans,” he says. “I’m very grateful to be able to be part of this process.”

Tam often relies on the formulation tools and pharmaceutical sciences knowledge he developed at the School to support the programs at Merck.

“The training I got in the Kwon Lab — to think independently and creatively about approaches and tools in terms of drug delivery and formulation approaches — helps me solve the issues that chemistry and biology may have,” says Tam. “I would say my research focus is very broad, and that is exciting.”

His day-to-day routine as associate principal scientist includes benchwork and continuous collaboration with teams in Merck’s laboratories across the United States. Tam, who is based in California, says his main focus is how to develop formulations supporting chemistry and biology, particularly to help solve the puzzle of how to deliver a specific compound of interest into a target of interest.

“Just as we cannot administer a solid rock into humans or animals, we need tools to help active pharmaceutical ingredients be delivered into the body,” Tam says. “Formulation can aid absorption as well as improve the stability of the compound that we want to investigate.”

Some key projects he has worked on during his time at Merck include examining different formulation types, such as ocular drug delivery, long-acting injectables, and oral formulation.

“I think it is very important for scientists, including me, to think about how to apply our diverse research backgrounds to advance the field of pharmaceutical sciences. The key is teamwork and collaborative work, in both academia and industry.”
—Tony Tam

Tam and his team are currently working on developing a potential molecule that checks all the boxes for efficacy, toxicology, and formulation profile. Tam says the molecule could help make a groundbreaking medicine for a chronic metabolic disease.

Tam says he is looking forward to continuing work with his teams to make a difference in the world.

“The collaborative environment really brings us together, and as a team with varied backgrounds we can make great, transformative medicines,” he says.

Lessons from the Kwon Lab

Tam says Kwon has always been a supportive mentor who helped him grow his scientific career and gave him the freedom to explore independent, diverse research opportunities.

“His door was always open,” says Tam. “Whenever I had questions, I would go to his office and discuss it with him or simply just grab a coffee. It was a really fun, relaxing, and exciting journey with Professor Kwon.”

Kwon encouraged Tam to be a teaching assistant in the School’s compounding lab led by faculty assistant Bonnie Fingerhut and Professor and Vice Dean Mel de Villiers at the School, where Tam says he gained new knowledge and improved his communication skills.

Tam was also a teaching assistant for two drug delivery courses, and he received the William J. Tillman Teaching Assistant Award from the School of Pharmacy in 2016.

As a mentor, Kwon steered his students to work on their presentation skills and to be specific with messaging about research findings.

“I remember he told us to record ourselves for presentations. Listening to your own voice is weird, and I had never tried that before,” says Tam. “After hearing his thoughts, practicing within a group, and recording myself to listen to what I might articulate wrong and some of the content that I could improve, I really learned how to be an effective communicator.”

Apart from important communication skills, Tam also learned how to think like a scientist under Kwon’s mentorship.

“One thing that he taught me is to be specific, which is very important in scientific research. Scientists talk in a language that is data-based, which can sometimes be hard to understand,” says Tam.

Kwon was also very supportive of Tam exploring new experiences, such as working as a project assistant at the School’s Zeeh Pharmaceutical Experiment Station and completing an internship with Teva Pharmaceuticals in Minnesota, which was his first immersion into industry.

The breadth of experience he gained as a graduate student laid the groundwork to become an effective member of an interdisciplinary research team.

“With my chemistry and drug delivery background, I feel very welcomed into the pharmacy family, not only at the School of Pharmacy but also within Merck,” says Tam. “I think it is very important for scientists, including me, to think about how to apply our diverse research backgrounds to advance the field of pharmaceutical sciences. The key is teamwork and collaborative work, in both academia and industry.”