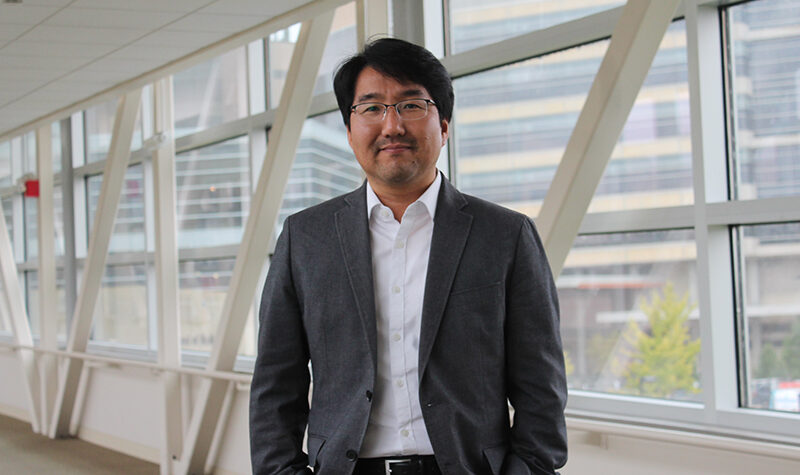 With new funding from the Falk Medical Trust, Professor Seungpyo Hong and collaborators are paving the way for a novel treatment for idiopathic pulmonary fibrosis

The road from the laboratory bench to the local pharmacy can be long, but University of Wisconsin–Madison School of Pharmacy Professor Seungpyo Hong and his collaborators are picking up speed with a Transformational Award from the Falk Medical Trust. The three-year, $1 million grant “provides a bridge to the technology transfer process for moving an exciting health care innovation to the next step in commercial development,” according to the Falk Medical Trust.

The innovation on the horizon: a new inhalable, life-saving treatment that could help millions of people suffering from idiopathic pulmonary fibrosis (IPF). The buildup of scar tissue in inflamed lungs leads to “an unrelenting cycle of destruction of the normal airways, reducing air exchange, impairing exercise capacity, and eventually leading to death by asphyxiation,” explains Hong, the Milton J. Henrichs Chair in Pharmaceutical Sciences and director of the Wisconsin Center for NanoBioSystems (WisCNano). “The life expectancy after being diagnosed is two to three years, and there are currently no effective treatments.”

But that could change thanks to the pioneering research of the UW–Madison team, which has found a way to potentially reverse the devastating lung damage caused by IPF. Hong is jointly leading the project with Allan Brasier, executive director of the UW Institute for Clinical and Translational Research. Nathan Sandbo, the director of the UW–Madison Pulmonary Fibrosis Foundation Care Center, is also an investigator on the project.

Crossing ‘the valley of death’

In 2019, the Falk Medical Trust awarded Hong and Brasier the Catalyst Award, which provides $300,000 in seed funding for high-risk, high-reward projects. Their work demonstrating proof of concept helped the team land the new Transformational Award.

“This particular phase has to focus on the translation of this technology and bringing the technology to the clinic,” Hong says.

In 2021, Hong and Brasier won a State Economic Engagement and Development (SEED) grant from UW’s Discovery to Product (D2P) program to test their compound’s efficacy in reversing fibrosis. Both that grant and the Falk Transformational Award help bridge what researchers call “the valley of death” — the chasm between the early lab discoveries that are usually funded by federal grants and the point when a treatment is ready for the marketplace.

“There’s a big need for these types of grants, and it’s an important step in us being able to move this therapy into treatment for idiopathic pulmonary fibrosis,” Brasier says. “We have a very promising therapy that works in cells and in animal systems, but we have to further modify, improve its specificity, reduce its toxicity, and demonstrate that it works in human-relevant models.”

By the end of the three-year grant, the team hopes to be ready to seek FDA approval for first-in-human studies.

Hong and Brasier first began collaborating a few years ago. Brasier, senior associate dean in the School of Medicine and Public Health, is an internationally known expert on the mechanisms of inflammation. His lab found a small molecule that blocks a key pathway of lung fibrosis. By inhibiting bromodomain-containing protein 4 (BRD4), which is one of the proteins responsible for triggering fibrosis, they discovered they could reverse the tissue damage.

However, it’s also an important pathway in other body processes, such as normal differentiation of blood cells. To prevent toxicity, the goal now is to design a better way to deliver the drug to only the disease-generating cells without exposing the rest of the body. That’s where Hong’s nanomedicine expertise comes in.

“One of the ways to increase the targeting efficacy is to increase the binding kinetics, so we focused on engineering peptides and found the peptide sequence that binds to fibronectin on the surface of myofibroblasts,” Hong explains. “Then, because we want to target the deep lung, we made it into an inhalable medicine. It goes into the fibronectin-rich areas, which is where the fibrosis is.”

“Through this Transformational Award, we’re going to optimize the formulation and test and measure efficacy, side effects, and pharmacokinetics. We want to get really solid evidence that this system is going to work — and work better than existing treatments.”
—Seungpyo Hong

Hong’s first challenge was to formulate the aerosolized nanoparticles that would encapsulate the BRD4 inhibiter and make it a targeted, long-lasting drug. The early results have been promising, showing that the peptide-coated nanoparticles bind extremely well to the targeted areas and can last for 24 hours, compared to three hours for a typical drug.

Over the next three years, the team will test their compounds in extensive in vivo studies using mouse models and human lung tissue.

“Through this Transformational Award, we’re going to optimize the formulation and test and measure efficacy, side effects, and pharmacokinetics,” Hong says. “We want to get really solid evidence that this system is going to work — and work better than existing treatments.”

From the lab to the clinic

Those “de-risking” experiments, as they’re known, are essential to securing support from a biotechnology startup or pharmaceutical company to ultimately get a new treatment to patients. Hong will also need to scale up to using larger nanoparticles. Smaller nanoparticles can work well in a lab environment but not necessarily in a pharmaceutical production line.

“That scale jump-up requires a lot of chemical engineering,” Hong notes. “That will position us to better translate this technology.”

It’s a long process that takes many years, but they’re on their way.

“We’re excited to see that we continue to get results that are promising, and we continue to secure the support we need to complete this work,” Hong says.

And patients with IPF aren’t the only ones who could benefit.

“This is a common pathway for how fibrosis occurs in the lung, and it also plays an important role in viral-induced diseases and asthma. We think that long COVID, or post-COVID syndrome, that’s associated with pulmonary fibrosis also has components of this pathway being activated,” Brasier says. “So there are likely other diseases this could be used for, but we have to get to the point where it’s approved for IPF before we can re-direct it.”

Projects like this one have the potential to put Madison on the biotechnology map, he notes.

“UW is very well poised for coming up with other therapeutics, and there’s a lot of opportunity here for connecting UW innovation with Madison’s rich biotech culture,” Brasier says. “With a little bit of effort and organization, we could make Madison a biotech hub, like the coasts have already done.”