Although there are many health challenges facing the United States today, prescription opioid abuse merits special attention as it has now reached epidemic proportions. It is estimated 52 million American adults used prescription drugs for non-medical reasons in 2013, and prescription opiates also now account for over half of all overdose deaths in the United States with about 1 million emergency room visits per year. It is even more alarming to note the rate of increase of this issue—the number of prescription painkiller overdose deaths has more than quadrupled since 1999. While not all abusers of prescription opioids have received a legitimate prescription, these trends have been occurring alongside a dramatic increase in the amount of prescriptions written for these compounds—in 2012 there were 259 million, enough for every single American adult to receive a full month’s supply. The bulk of the prescriptions written are for patients with back pain or osteoarthritis, with over 55 million patients. Shockingly, there are no long-term studies conclusively demonstrating that the benefits of chronic opioid use outweigh the risks for these conditions.

Given that some legitimate medical users will eventually fall into a pattern of misuse and addiction, and that many legitimate prescriptions will eventually be diverted for non-medical use, eliminating sources of unnecessary chronic use of these products could have a substantial impact on the future of such abuse. We thus studied whether the chronic use of opioids could generate self-reactive antibodies that diminish their long-term efficacy in patients with lower back pain, and whether the inflammatory consequences of chronic opioid therapy can be reduced following a period of opioid abstinence.

Low levels of IgM antibodies were detected in long-term users of prescription opioids, with a modest trend toward dose-dependent effects of immune activation. Differentiation of antibody development from opioid-naïve individuals is inconclusive due to small sample sizes.

A video from the American Chemical Society about this research.

Findings from this grant are now being used to support follow-up projects looking at alternative and expanded human sample populations, assess biochemical mechanisms of antigen and antibody production, and interrogate the effects of alternative routes of administration for opioid vaccines on antibody formation. 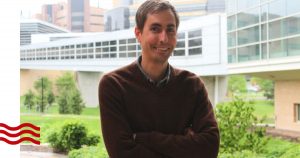